Stumptown Breakdown: A Lead for LA

With special thanks to SEDave for the new name, this week Stumptown Breakdown looks at the opening goal of Saturday's game between the Portland Timbers and the LA Galaxy.

Share All sharing options for: Stumptown Breakdown: A Lead for LA

I know, I know. Why am I doing another goal against the Timbers when we scored two this week? Well, Greg Lalas beat me to my first choice and as a big fan of Anatomy of a Goal, my analysis of that goal is now "Yeah, what he said!" And thrilling though our game-winner was, when I went back to watch it again, I did not find it as interesting from an analytical standpoint.

So today I'm looking at the goal with which LA took a rather short-lived lead over the Timbers.

It all began, as a number of frustrated readers have pointed out, with Ryan Johnson being called offside. Apparently neither he nor Jack Jewsbury, who passed him the ball, realized that he was standing in an offside position. The whole thing was a bit lazy and a very unfortunate way to turn over the ball.

The Galaxy took the free kick short, and started to work the ball up the right side of field. 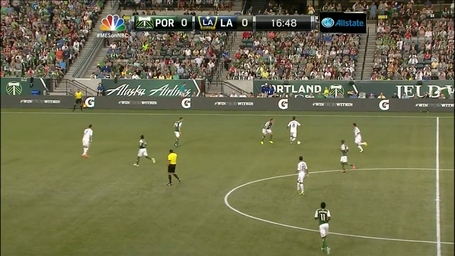 Nothing looks too threatening here. Michael Harrington is on the man with ball, Marcelo Sarvas, and you can see his teammates around him in motion, presumably picking up runners, cutting off passing lanes, and the like. That doesn't last long. 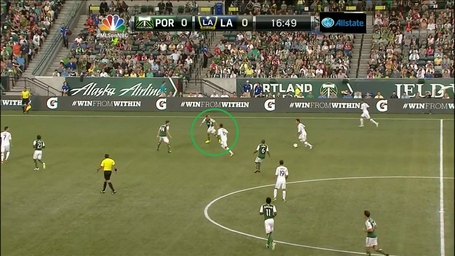 In the green circle, Harrington drops off Sarvas to pick up Héctor Jiménez. Ben Zemanski, meanwhile, is a little slow to step up to Sarvas. When he finally does move in to close the midfielder down, he over-commits and Sarvas has no problem passing the ball out wide to Sean Franklin, which is what we see in the next frame. 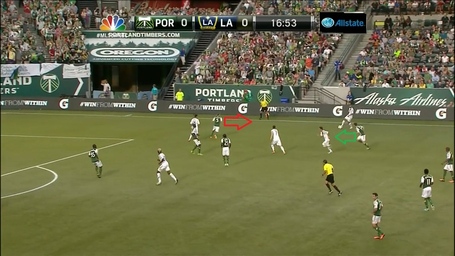 This is probably starting to seem like picture overload, but I wanted to illustrate how many times Harrington and Zemanski are having to switch marks and arriving just a bit too late to cut out passes. In the picture about you can also see Diego Valeri, Kalif Alhassan, and Darlington Nagbe at the right of the picture, all walking behind the play. Either Nagbe, the central attacking midfielder, or Alhassan, the left winger, should probably be helping Harrington and Zemanski, who are trying to cover three players--Sarvas, Franklin, and Jiménez--between the two of them.

Now, in the picture above, Zemanski is following Sarvas' run to the box, as shown by the green arrow, leaving Harrington, who had been following the run of Jiménez, to close down Franklin. His next move is indicated by the red arrow. As he leaves Jiménez behind, he leaves him open, the perfect pass for Franklin. Again, a little defensive play by Nagbe or Alhassan could have helped Harrington out a lot here. 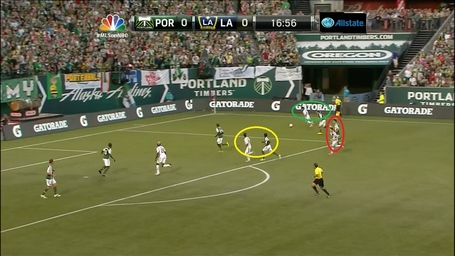 Now, Harrington, in the green oval and pulled out of position as he tried to cut out the pass from Franklin, is left trying to catch up to Jiménez. Zemanski, in the red oval has picked up Robbie Keane, presumably seeing that Sarvas' run was taking him right past Diego Chara, in the yellow circle. Harrington needs to catch up to Jiménez, but still, it looks like everything might turn out okay. Except then Chara does something kind of baffling. 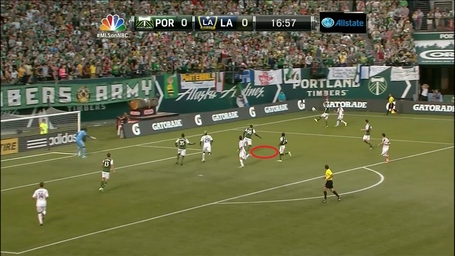 He slows down. He has clearly seen Sarvas, and yet he allows more space between them, instead of speeding up to keep with Sarvas' run. Perhaps he thought Futty Danso would mark him as he ran past (he does turn to Futty after the play as if to say "Didn't you have him?"), but he shouldn't have backed off until he could see for sure that someone else had Sarvas. Harringon, by the corner flag, wasn't fast enough to block the cross from Jiménez. It's worth noting that Futty probably needs to be where he is in case Jiménez beats Harrington and cuts inside. 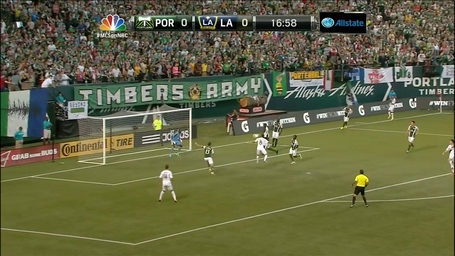 Jewsbury is unfortunately not fast enough to make up for Chara's complete failure to mark Sarvas, though he tries. Above, Sarvas gets on the end of the perfect cross from Jiménez right in front of goal, with only Ricketts in his way. Even he could do nothing about Sarvas' powerful header to the back post.

The Timbers almost made it too easy for LA. This wasn't a quick counterattack or a tricky play like the one the Timbers scored on later. It was just a normal buildup that certainly didn't have to culminate in a goal. There are a couple areas where it really fell apart.

First, there are four players taking no defensive responsibility on this play. Alhassan in particular, the left side midfielder, probably should have been helping out. Nagbe is also right by the play at one point, but doesn't get involved to help defend.

As a result, Zemanski and Harrington have to shuffle players to make sure someone is always on the the player with the ball. The two of them on their own have trouble sufficiently covering that side of field.

Lastly, Chara fails to pick up Sarvas, leaving a wide open man in the box. Even with the other defensive problems, the whole play could have been entirely forgettable if only there was someone challenging Sarvas for the ball and making that header a little more difficult.