The Timbers owner held another impromptu Twitter question and answer session earlier today. Here is some of what he said.

Everyone seems to agree that the Timbers have one of the most engaged owners in MLS and, despite early season vows to cut down on his tweeting, Merritt Paulson has done little to disprove that notion. In the wake of recent Twitter question and answer periods from Don Garber and new Columbus Crew owner Anthony Precourt, Paulson opted to address some questions from his followers as well.

We are not all twitterati, so we have collected some of the most impactful tweets here for your perusal.

@Pete_PDX we almost signed a DP, deal fell through due to Euro team. Feel good about where we are...not forcing something just to make deal

@anoncoach doubt it. We almost inked a DP this window and deal fell through at 11th hr. we have a good team now

With the transfer window closing on August 8th, the Timbers are running out of time to bring in reinforcements. The Timbers intention to bring in a designated player shows the team's commitment to finishing out the season strongly, but as Caleb Porter has said all season long, the team only intend to bring players on board that fit with the system and the personnel already on board.

@jrojasa75 he is not going on loan. Need him here. Would love to get him more meaningful minutes but balancing act

After Paulson tweeted this, Chris Rifer speculated that the lack of a DP deal could be related to Valencia not going on loan. Paulson responded to him with a tweet that said "probably not crazy" before immediately deleting it.

The lack of a loan deal for Trencito, whose minute has steadily increased as a late-game sub this year, definitely makes sense in light of the Timbers possibly not bringing in anyone else. Although Bright Dike is recovering well, he is still an unknown quantity in terms of his recovery and is some ways away from being fully fit and able to play.

@ambrown literally can only do 1-3k more and trying to figure out best way to do that for all. Major expansion not option w our footprint

@b7283sosu not for all star. Maybe down the road if we can make some stuff happen. Temp sod on turf is a joke

This is not the first time this year that Paulson has alluded to putting in a grass pitch at Jeld-Wen. The big question is what "stuff" needs to happen before they can do so. The obvious issue is finding a new home for PSU football, which would destroy a grass pitch in the late summer through the end of the Timbers season.

Even doing double duty for the Timbers and Thorns could cause a serious issue in keeping a grass pitch in good shape. As we saw this year, the Timbers were reluctant to train on their grass training pitch, so a pitch at Jeld-Wen with less sun could cause even more of an issue.

@shebainpdx CCL if we qualify and USOC

@shebainpdx forgot preseason tourney. We have already locked that down and it will function as game A like always

Paulson later mentioned that next year's tournament would feature all new teams, although it seems likely that there could be another team representing the Swedish Allsvenskan instead of AIK.

Everyone likes the 'fro. 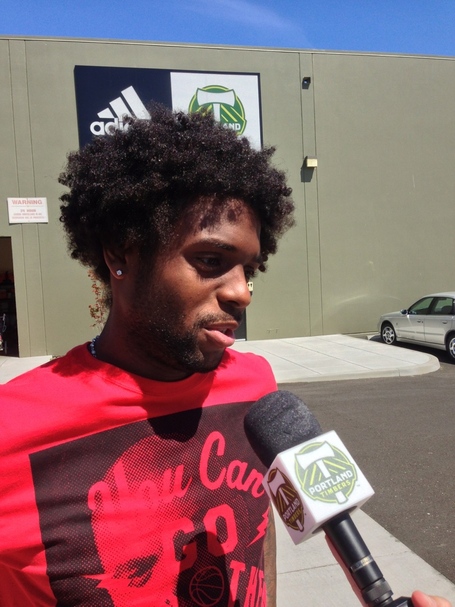