The Timbers' comeback falls short, but they get a consolation goal against San Jose.

Share All sharing options for: Stumptown Breakdown: Not Enough

Desperately looking to get themselves back in the game Saturday night, the Portland Timbers put together a pretty impressive counterattack to cut the San Jose Earthquake's lead in half. Their revival wasn't enough to get them a result, but it was a pretty nice goal, so let's take a look.

Here is the goal:

It all starts with a sloppy bit of play from Adam Jahn, who gets a little too fancy in the midfield and tries a one-touch pass to Shea Salinas, but without any power or, you know, accuracy. His attempt is easily picked off by Jack Jewsbury, who wastes no time in getting the ball to Diego Valeri. What we see next, in the picture below, is that right away, Darlington Nagbe, Rodney Wallace and, one would assume, Frederic Piquionne (out of frame), start making their runs up the field. In the video above, you can see a lot of Earthquakes players jogging at this point. They have their 2-0 lead and they've switched off a bit; they are not seeing the threat here. 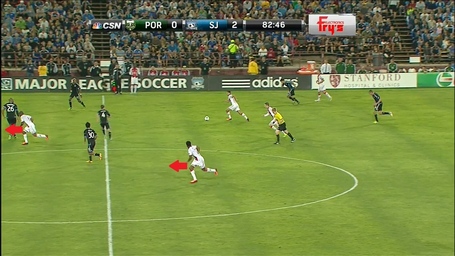 You can see here one reason the Timbers are such a good counterattacking team. These are all good runs. We know Piquionne is making a good run, because Valeri picks him out, and when we finally get him back in the frame, he's put himself in a good spot. But Valeri could have easily laid the ball off for Wallace instead, who could have carried it up the middle, supported by Nagbe to his right and Harrington, hopefully, making the over lapping run on his left. Valeri possibly even found Nagbe with a through ball. That would have been tough, but we know Valeri can work some magic. In fact, he pretty much does that with his next pass, so lovely I almost want to write an ode to it. 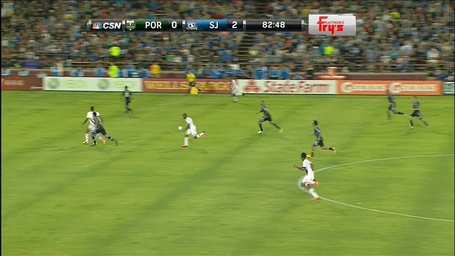 There are four or five San Jose players that pass has to glide past to find Piquionne, but find him it does. Now, technically, I realize this pass could have been better, since it is a little behind Piquionne, as you can see in the next frame. 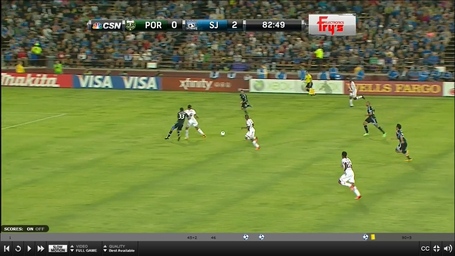 Plenty of MLS strikers would now attempt to bring that ball into stride and beat Steven Beitashour, hopefully cutting front of him to get a clear chance on goal. Many of them would probably get a corner kick at best out of the situation. Instead, Piquionne, looking back toward the ball, sees the run of Nagbe and rolls the ball into his path, using what might be a backheel pass or might be a move using the bottom of his foot that I'm not sure how to describe. 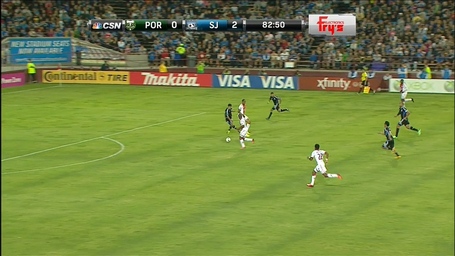 Whatever that was, whatever you call it, it's easy business for Nagbe from here. Those San Jose players who were jogging earlier are now well behind the play. The closest defender to the ball, Beitashour, was just dealing with Piquionne and can't quite get in front of Nagbe in time to help Jon Busch. Nagbe, who has on occasion disappointed us in one on one situations, slots this home with confidence and poise.

Before I wrap this up, I want to say a few words about this: 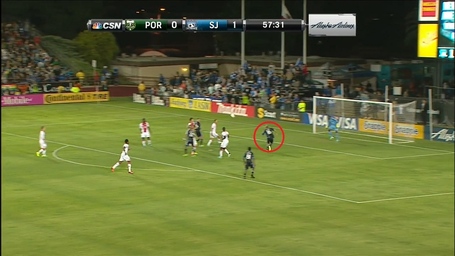 This is San Jose's second goal and specifically, I would like to say: Come on guys! What the heck is this? How could you possibly leave Steven Lenhart unmarked on a set piece?