Dallas responds to the Timbers opening goal with an equalizer just moments later, while the fans are still celebrating.

The smoke was still billowing from the Timbers Army, celebrating the Portland Timbers opening goal by Ryan Johnson, when FC Dallas put a damper on the festivities. Perhaps the Timbers were still celebrating as well, because a mere 35 seconds after the ensuing kickoff, Dallas had equalized.

After Dallas kicks off, they pass the ball around their back line for a while, holding off the Timbers' high pressure well, but struggling to get the ball across midfield. Finally, Matt Hedges gets the ball into the Timbers half with a long ball toward Kellyn Acosta. In the first frame, Rodney Wallace actually gets the touch on the pass from Hedges. 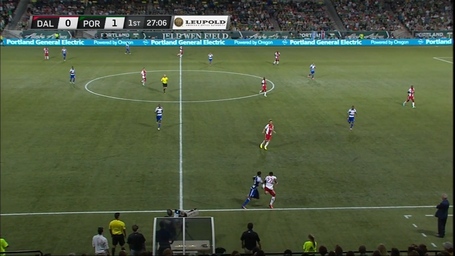 Unfortunately, he inadvertently deflects it in the direction of Jackson, who you see above, just to the left of the midfield line. 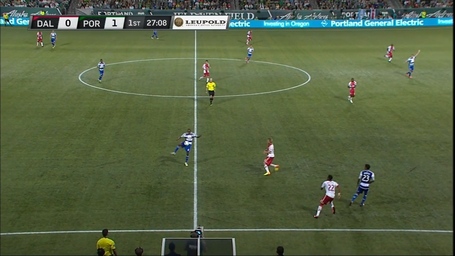 Jackson chips it forward on his first touch, leaving Michael Harrington no time to shut him down. Harrington tries though, so he has been pulled pretty far up the field when Jackson's chip sails right over his head to Fabian Castillo. 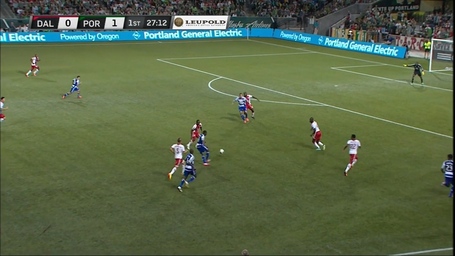 Castillo brings the ball down in tons of space, and has a wide open pass to Blas Perez at the top of the box, which he's able to get off before Diego Chara can shut him down. Also, notice Mauro Diaz, soon-to-be goalscorer, is making a streaking, unmarked run up the middle of the field, the top left corner of the frame above.

Andrew Jean-Baptiste is right on Perez as he receives the pass, well positioned between him and the goal and not giving him much time to make a decision. 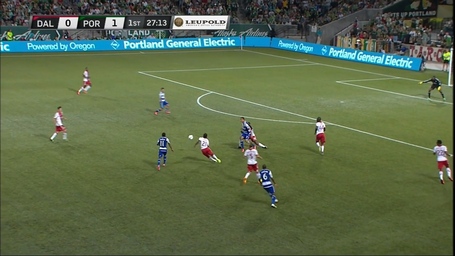 Perez doesn't need much time though, as he does a quick give-and-go with Castillo. Chara lunges for the pass, but can't quite poke it away from Castillo. Another quick touch from him... 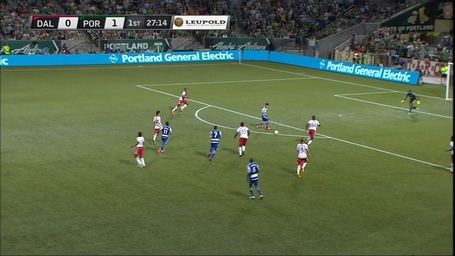 and a still wide open Diaz is in on goal. Pa Modou Kah and Alvas Powell both react, but way too late.

Either Ben Zemanski or Powell should have been hustling to pick up Diaz. Powell in particular seems inappropriately casual, since Diaz should be right in his sight line as he sprints up the field. Powell might have been caught watching the ball, instead of thinking a few steps ahead and seeing how the play was likely to unfold.

Another area of concern for me is that on a number of these goals against us that I've analyzed, Kah, while generally not directly responsible, often seems to be in no man's land, doing little of use for his team. Whether it's an issue with him specifically or a problem with communication on the back line, it is something that needs to be tightened up. You want to see the center backs involved in defending these plays, not floating around in empty space and finally reacting when it's too late to make a difference. Maybe if Kah had been on Perez, Jean-Baptiste could have slid over to pick up Diaz as he came running through. Or maybe if he had helped one of his teammates double-team someone earlier in the play, they could have put a stop to it earlier.

For a team that can be so focused and driven, these seeming lapses in concentration--early in matches, on set pieces, and in this case right after taking the lead--are frustrating and seem inconsistent with the team's overall mentality. The Timbers' upcoming opponents will be more than willing to pounce to on these little breakdowns. Here's hoping they can sort it out very quickly.