A set piece is the killer again as Portland falls to Seattle.

Share All sharing options for: Stumptown Breakdown: Another Game, Another Set Piece Goal

It's disappointingly unsurprising, really. After being the better team for much of the first half and really limiting the Seattle Sounders' chances on goal, the Portland Timbers lost the game on yet another set piece goal.

I want to start by taking a look at the foul by Pa Modou Kah. Here he is, about to tackle Eddie Johnson. 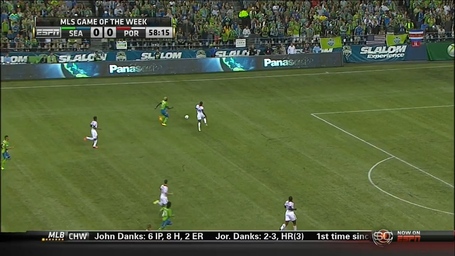 It really did look like Kah would be able to make the tackle cleanly, but he underestimated Johnson's speed. The tackle was not necessary anyway. Johnson is headed toward the corner flag and all Kah needs to do is stay on his feet and stay with him. He even has help if he needs it, since the whole back line has already caught up.

When a team is as bad as defending set pieces as the Timbers have been, players need to avoid committing fouls in dangerous areas as much as possible, so if a player can stay on his feet, he should take that option.

Obviously that's not the route Kah went, so he got a yellow card and the Sounders got a set piece in a great (or, from our perspective, terrible) spot. 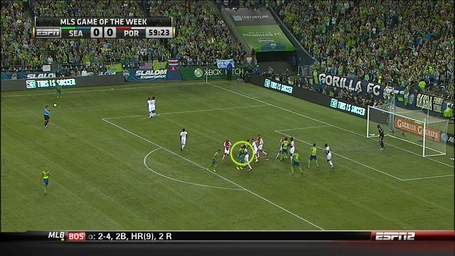 Here we are before Mauro Rosales takes the kick. Johnson's yellow hair should be easy to find, but since the picture is small, I went ahead and put him and Powell in a rave green circle as well. At this point, Johnson is marked and doesn't appear to be the biggest threat. Much more concerning is that Clint Dempsey is open and about to make a run to the far post. Fortunately, Ryan Johnson, standing right by the penalty spot, is looking back over his shoulder and does seem to have spotted Dempsey. 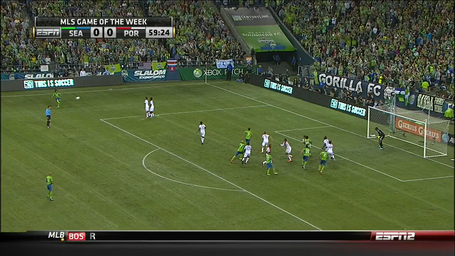 No sooner has Rosales kicked the ball than Eddie Johnson has started to shake Powell; he's ball side and about half a step from being goal side too. And it's a real shame, because credit to the Timbers: there's actually some pretty decent set piece defending happening here. Dempsey is making for the back post as Zach Scott cuts around him and into the middle. Instead of getting all mixed up, Kah calmly drops off Scott to pick up Dempsey, while Ryan Johnson and Andrew Jean-Baptiste close in on Scott. 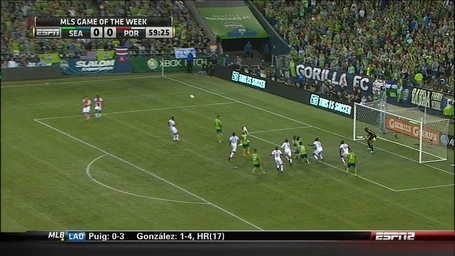 This would all be great if Powell had done an equally good job with Eddie Johnson. But as you can see about, Johnson has now completely gotten away from Powell and the Timbers have a bit of a problem on their hands. As everyone else follows their respective marks, they are effectively parting ways for Johnson. He could hardly have asked for a more wide open header. 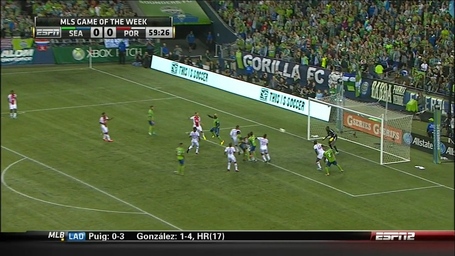 He wins the ball with ease and in this frame, the ball is headed into Donovan Ricketts' net. Now I'm going to say something that I expect a number of people will vehemently disagree with. I'm a little disappointed Ricketts doesn't even make a move for the ball. It was a powerful header for sure and it would have been an awesome save, but Ricketts seems like he could have seen the ball sooner. If he reacts to the shot at all, those long arms may at least have a chance at keeping the ball out. As it is, he barely moves. Maybe regularly getting beat up in games is taking its toll, because the guy looks like he could use a rest. Nonetheless, his defenders, Powell in particular, needed to do more to stop him from having to face that shot.

There isn't a whole lot to say about what went wrong beyond the obvious fact that Powell lost his man. Frankly it was a little surprising to see Powell on Johnson in the first place. Back in 2011 when the Timbers were exceptionally good at set pieces, we usually saw opponents putting their biggest strongest guys (usually their center backs) on our big set piece threats. A 19-year-old outside back seems like exactly the sort of player you would expect someone like Johnson to be able to take advantage of.

I feel like we at Stumptown Footy are running out of new and original things to say about our set piece defending. The team clearly knows it's a problem,and Caleb Porter had said they're working on it, and that he's not sure why this is still happening. Looking at how tight the Western Conference standings are, they will want to figure that out soon.