Stumptown Breakdown: Quick on the Counter

Another speedy counterattack gives the Timbers the opening goal against the Whitecaps.

Share All sharing options for: Stumptown Breakdown: Quick on the Counter

After a first half between the Portland Timbers and the Vancouver Whitecaps that featured lots of yellow cards and no goals, the Timbers got things started early in the second half with a 49' minute goal. The lead, unfortunately, didn't hold, but let's take a look at how it happened. 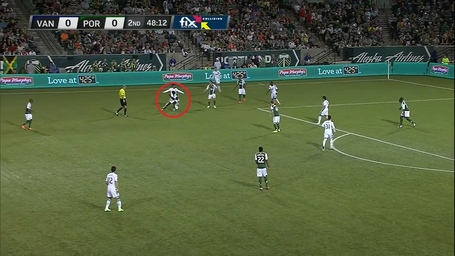 Pa Modou Kah gets things rolling with a great defensive play, as he steps up to poke the ball away from Daigo Kobayashi. It's the kind of play that can be dangerous; miss the ball, and your opponent is past you and headed for the goal. In this case, other Timbers are there to cover, but it's unnecessary, as Kah read Kobayashi well and wins the ball. Jewsbury takes it and finds Darlington Nagbe in the middle of the pitch. 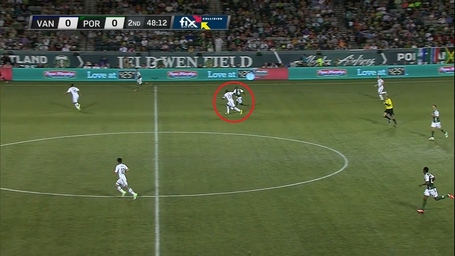 Nigel Reo-Coker defends Nagbe pretty well here. He doesn't let him cut back to the middle and instead steers him toward the sideline, minimizing his passing options. Nagbe still has Diego Valeri though, and he is happy to take that option. 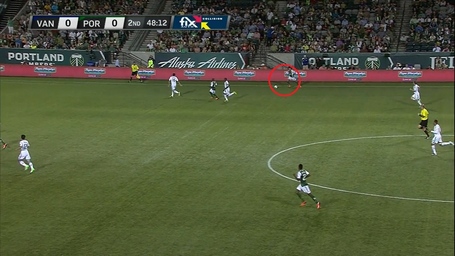 Now Valeri has the ball and tons of space on the sideline. Nagbe and Ryan Johnson (whose boot is visible at the far left as he disappears from the frame) both continue their runs. 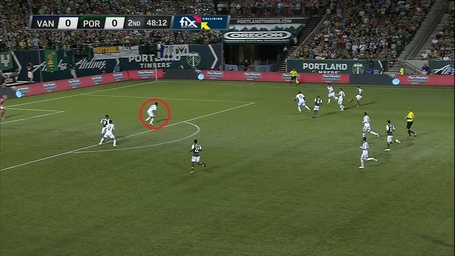 Valeri is able to drive towards the middle more, and as he does he pulls in three Whitecaps defenders. With all the space left in the middle of the pitch for Johnson, Rodney Wallace, and other late-arriving runners, Vancouver has basically surrendered their two-man advantage.

What's more, Johnson is a step ahead of Whitecaps defender Lee Young-Pyo and he's between his defender and the incoming ball. Meanwhile Carlyle Mitchell, in the red circle, is between Johnson and the ball but he's not helping defend the Timbers forward because he is totally focused on Valeri and the ball. As a result, he's also keeping Johnson onside, Johnson has put himself in a perfect position. There is really no one between him and Valeri's pass, and once he gets the ball, there's no one between him and goalkeeper David Ousted. 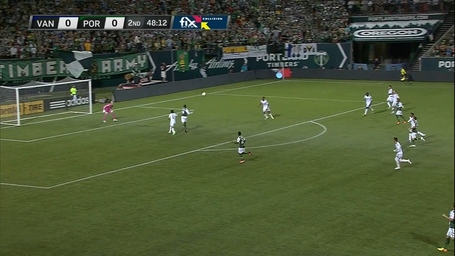 As the ball comes to Johnson, Lee still hasn't made up that lost step. Various angles on the replay also show that Ousted was starting to shift towards the center of the goal, so he ends up having to dive back to his near post. With his defender beat and the keeper wrong-footed, it's a free header for Johnson.