Will Johnson makes it three for the Timbers and puts the game out of reach for Toronto.

Share All sharing options for: Stumptown Breakdown: Sealing the Deal

Last Saturday was a bit more fun, wasn't it? After a couple rough losses, the Portland Timbers took on Toronto FC and gave us a game and some goals that are actually fun to look back on. Though the game-winner was the very first goal, scored at the end of the first half, it took a little bit longer for Timbers fans to feel that the lead was safe and that the Timbers were really getting the result they should against Toronto.

Diego Chara gets things started for the Timbers when he pounces on a careless touch from Robert Earnshaw in midfield. 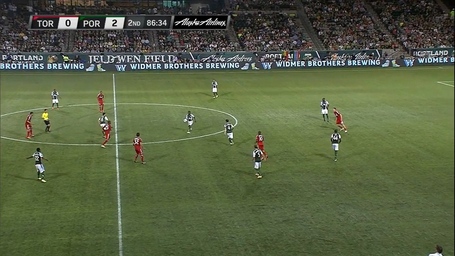 Chara brings the loose ball down on the edge of the center circle, and finds Diego Valeri ahead of him for a little give-and-go. 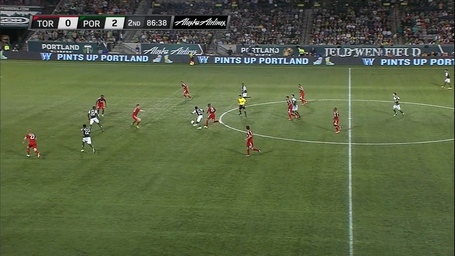 Chara receives the pass from Valeri and continues his run up the field, while Jose Valencia and Rodney Wallace, ahead of him, move to get into space. 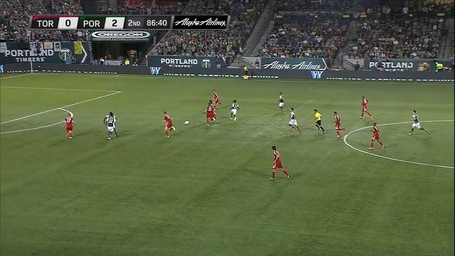 Unfortunately, they both start to make essentially the same run. Wallace fixes the problem quickly though. As Chara finds the narrowest of passing lanes between two Toronto players to deliver the ball to one of his teammates, Wallace sees that Valencia is a step ahead of him and drops off, bringing Steven Caldwell with him, while Richard Eckersley follows Valencia. 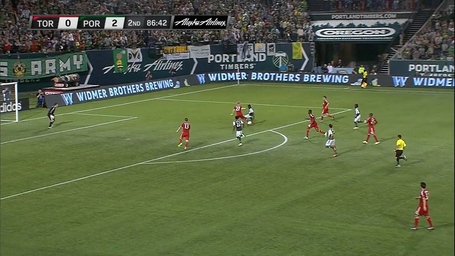 If there was a moment for Toronto to put an end to the Timbers' attack, this was probably it, as Valencia tries to cut back and get in on goal, but slips. Fortunately, Eckersley's momentum carries him well past the ball and he loses his footing as he tries to change direction quickly. 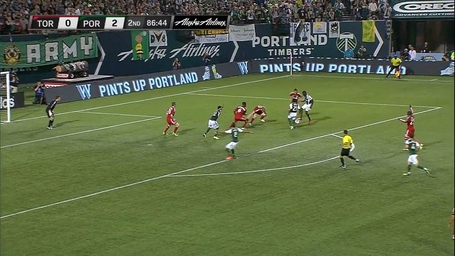 As a result, Valencia is the first one to his feet and back to the ball. Gale Agbossoumonde and Jonas Elmer both catch up to the play while Valencia is recovering, and while they race past him to position themselves between the Timbers forward and the goal, neither one actually attacks the loose ball. So Valencia simply collects it and pulls it back a little to put some space between himself and Toronto's back line.

Maybe because Valencia is such a handful, or maybe just because Toronto is Toronto, all four defenders cluster in the corner of the box where Valencia has the ball. That means once he gets himself a little space, he can see a couple of wide open teammates, particularly Valeri, on the other side of the box, and Will Johnson, who is making the late run. 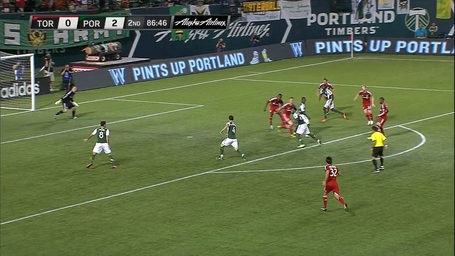 Johnson arrives in the box just as Valencia pokes the ball away from all the defenders. Chara and Wallace let the ball go past them. In the video, it looks like Valencia's pass may have been intended for Valeri, who was clearly waving for the ball, but it's perfectly timed and weighted for Johnson to run onto it not far from the penalty spot. 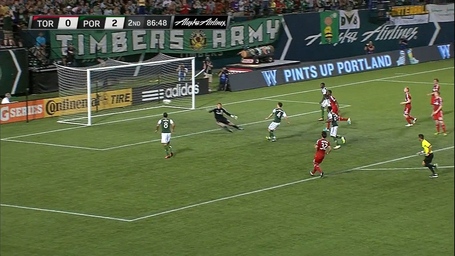 One touch from the captain to get the ball on his right foot and it's an easy but stylish finish that Joe Bendik, completely hung out to dry by his defense, can do little about.

Excitement over the 4-0 rout of Toronto has been somewhat tempered by the fact the it's "just Toronto," one of the worst teams and worst defenses in the league. However, the Timbers' attack still did plenty right, especially in the last 10 minutes, that could translate to success against the league's better teams.

One of the things that stands out most on this particular goal is that he Timbers had numbers in the box, something they have struggled with lately. A team like Real Salt Lake probably wouldn't have left Valeri wide open, but if the Timbers have four guys in the box and the other team has to worry about a late run from Johnson, they become a lot harder to defend than if they just have one player making a run to the far post.

Another benefit of having several players in the box is that, obviously, there are more players there to score. If Valencia's pass was intended for Valeri, it might have been a tiny bit soft. No problem though, because there was another player there to collect the pass. Or maybe Valencia wasn't really feeling the pass to Valeri, but saw the run from Johnson instead. And if Bendik did manage to stop the shot? There are four players in the box ready to put a rebound. The Timbers will want to work this strategy again when they face Chivas this weekend.