The Timbers get casual in the box and dig themselves another hole.

The Portland Timbers started their game last weekend, against Chivas USA, a little slowly. Again. So it was little surprise when, once again, they were punished when they conceded a first-half goal.

The play starts before this video with a botched attempt at a short free kick. Will Johnson passes it to Darlington Nagbe, whose one touch pass is easily cleared by Chivas. Michael Harrington tries to get the ball back in play, but Chivas reclaimes possession and passes it up from the back. Eric Avila beautifully switches the ball to Edgar Mejia. 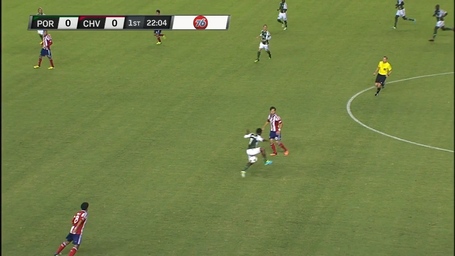 Then came the first and best chance for the Timbers to out a stop to the play, as Kalif Alhassan brings down Avila's cross but somehow loses the ball.  It's hard to say whether he tried to be fancy and got punished or whether he just misjudged the ball. He had that interception though, until suddenly he didn't.

The ball bounces through Alhassan's legs and reaches Mejia, its intended target, after all. 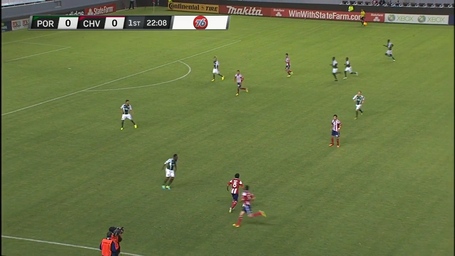 Alhassan drops off, so Mejia gets some space as Carlos Borja starts his overlapping run. Also worth noting in the frame above: Andrew Jean-Baptiste and Pa Modou Kah are in the upper right corner making their way back after going up for the free kick (where they were, of course, unnecessary, because the free kick was taken short). Diego Chara is with them as well. 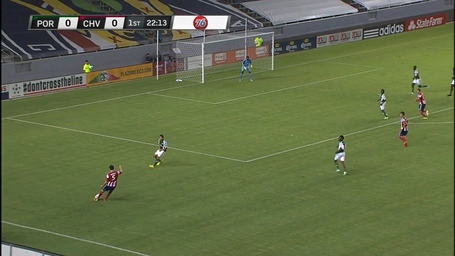 Mejia duly sees the overlapping run and feeds the ball to Borja. Sal Zizzo seems indecisive and hesitates to close Borja down, giving him plenty of time to make his next move. (Did any one else have flashbacks of both goals Chivas scored on against the Timbers in the first home game last season?) 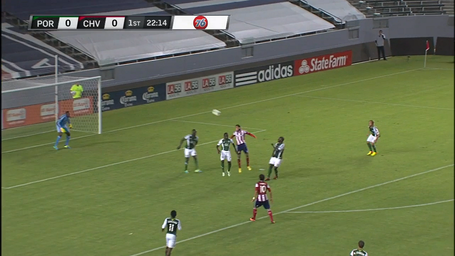 The cross is a beauty, right to Bryan de la Fuente. Though both center backs are back in the box, Chara has ended marking de la Fuente. He goes up for the header, but is easily out-jumped by the Chivas midfielder. He could possibly jump higher or mark de la Fuente tighter, but his opponent is a good few inches taller than him. It's possible Chara wouldn't have had a chance. Kah or Jean-Baptiste, having recovered from their foray up-field, should be attacking that cross. Really, with de la Fuente outnumbered four to one in the box, he should not have such an easy go at that header.

Chivas' goal came from a nice cross and a good header to the upper 90, but it also came from a number of little mistakes by the Timbers--Alhassan letting the ball bounce away from him, Zizzo failing to close down Borja, etc. The build-up play was fairly innocuous, and yet it looked as if Chivas had caught the Timbers on a lightning quick counterattack.

Some people have pointed out that it is not fair to expect a clean sheet in every game, and while that is absolutely true, it sometimes feels like the Timbers just give up goals much too easily. The other team never has to work as hard as they should.

Contrast their goal--an open cross, a free header--with the Timbers' goal in the second half. The Timbers move the ball quickly upfield, making them hard to defend, but Chivas collapses on Chara's pass into the box. It takes great hold up play from Jose Valencia and a lucky deflection on Diego Valeri's shot for the Timbers to find the back of the net. Chivas made them work for that goal and it took a little bit of luck on top of that. It would be easier to accept the goal as disappointing but part of the game if Kah and Jean-Baptiste had really gone for that header and de la Fuente had somehow won it anyway.