The Timbers may have a long week between games, but that didn't keep them from getting back to training today.

Practicing at the team's Beaverton training facility, the Portland Timbers held their first session since the team's 1-0 win over the Colorado Rapids on Friday. Today's practice was a short one as both the first team and reserves recovered from the weekend's matches, but the proceedings were kept open to the press.

After a brief huddle where Caleb Porter addressed his players, training started off with the usual jogging and stretching warmup directed by John Cone. After approximately ten minutes of warmups, the Timbers broke into four groups of six, two consisting primarily of starters and two of reserves. For four minute periods, two of the groups faced off against each other in a very tight-in game with small goals to score on, while the other two groups ran through a circuit around the periphery of the field that involved a series of obstacles that had the Timbers jogging, jumping, and cutting before taking a shot on goal.

The team went through three four minute periods before the two groups of reserves were dismissed for the day with the exception of Sal Zizzo, Frederic Piquionne, and Alvas Powell. From there the remaining players went through another round of running the circuit before moving to a short field game of six on six plus one. The mandate for the game seemed to be to shoot, without any restrictions on the number of passes needed or touches allowed. The game went on for two eight minute halves, before the Timbers wrapped up practice at 11:00. 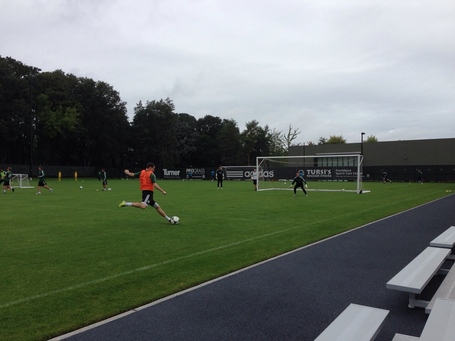 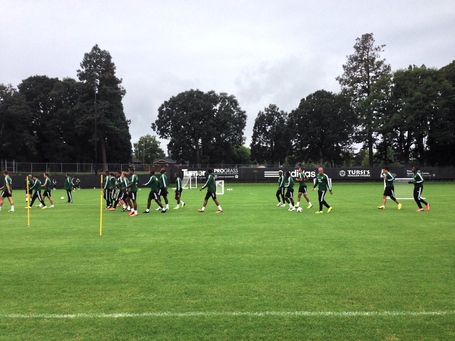 Diego Valeri rode an exercise bike on the sidelines of training today. Caleb Porter confirmed that Valeri was still "tight" after coming off the pitch in the 73' against the Rapids, his longest outing since making his return from an adductor strain. Porter said that Valeri would be healthy by the end of the week, but that the team was being careful with his health in an effort to make sure that he is available for the rest of the season.

Brent Richards was also on the sidelines of practice today. Richards, who is coming back from knee surgery that he underwent during the preseason, jumped rope for a good portion of the day's practice and observed for the remainder.

Mikael Silvestre and Steven Evans both warmed up with the team today, the first time either has done so since they picked up their respective injuries. After warmups, Evans went to work with Cone sepereately, while Silvestre helped with the circuit drill by passing the ball to players as they ran. Eventually, Silvestre joined Stevens and did some running under the direction of Cone.

Frederic Piquionne was back in practice for the full session this week, only the second time he has done so since injuring his ankle two months ago.