The two previous meetings between the Portland Timbers and the Colorado Rapids were three- and four-goal affairs, but when the two teams met for the final time last weekend, three big points were won by a single goal, a beautiful piece of work by Diego Valeri.

It doesn’t leave room for a whole lot of choice this week, but it sure was pretty. Here’s the goal:

Valeri’s goal comes early, but in the 13 minutes of play before, Maximiliano Urruti has already been pestering the Colorado defense and goalkeeper Clint Irwin whenever they try to take a moment to settle things down and pass the ball around the back. It’s no idle threat either—Urruti is fast and could easily dispossess a player who gets too casual.

As he comes sprinting at Drew Moor, the defender is forced to get rid of the ball quickly. 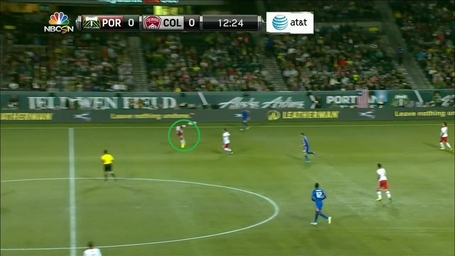 Moor attempts to clear the ball up field, but he doesn’t get much power on it. The ball doesn’t even make it to midfield before it is met by Rodney Wallace, who heads it back toward Urruti and Valeri. 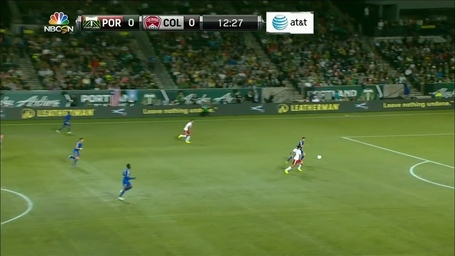 The Rapids defense is completely unprepared for the attack. Only the two center backs stand between Valeri and the goal, and one could easily land a Boeing 747 in the space between the two of them. Shane O'Neill isn't even in the frame until it's too late, so they are not exactly in a good position to stop Valeri running up the field. 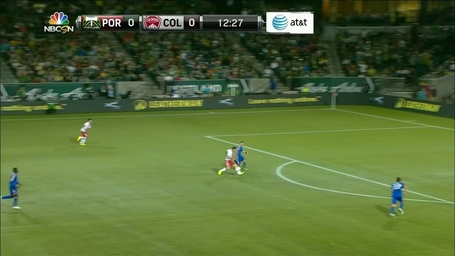 Valeri beats Moor to the ball, and he doesn’t even touch it at first. Just a little turn of his body helps him line up his shot while also shielding Moor off the ball and then one touch sends the ball looping over Irwin, who is off his line quite a ways. 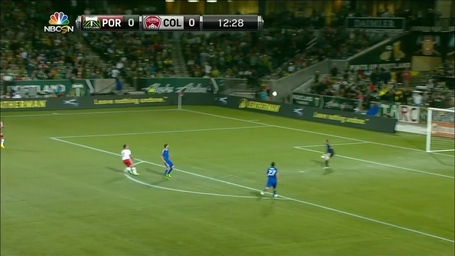 Maybe he was anticipating Valeri dribbling in more, or maybe he was just trying to cut down the midfielder’s angles, but all it did was give the Timbers’ maestro a chance to do a little showboating. It’s a pretty finish, and all Irwin can do is watch it sail overhead.

I wrote in a recent Stumptown Breakdown that the Timbers possession-based style didn’t seem to be what was yielding goals. Instead the Timbers were more likely to score on quick counterattacks or from moments of sheer individual brilliance. Another element of the Timbers style, however, is definitely working: the high pressure. This goal almost certainly doesn’t happen if Moor has time to pick out his pass. The Timbers second goal against Toronto doesn’t come without Valeri bearing down on Gale Agbossoumonde and poking the ball away as he panics and makes a bad decision. This is a tactic that works when it comes to creating goals and it needs to continue to be a major part of the Timbers' attack as they face some tough teams in the season's homestretch.