Take a closer look at one goal by each team from Friday's 4-2 goal fest.

Last Friday's match between the Portland Timbers and Real Salt Lake was a goal-packed game, so rather than narrow it down from six goals to one, I'm looking at one from each team this week.

Let's start the way the game started, with a Real Salt Lake goal. Here it is:

Since my tendency to watch set piece goals again and again is bordering on self-abuse (and really, I think we all know what went wrong on both those goals) I am taking a look at Real Salt Lake's opening goal. The play starts from a throw-in. 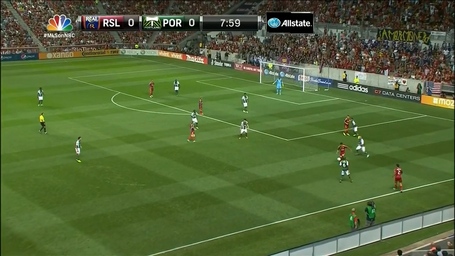 Javier Morales receives the throw-in at the near side. Michael Harrington stays with him as he dribbles away from goal and towards the center of the field, where he can see what the Timbers don't. 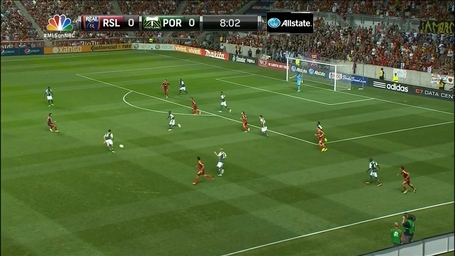 What the Timbers don't see is Kyle Beckerman making one of those late arriving runs that he is so good at. Morales feeds a simple square ball to Beckerman. In the frame above, it almost looks like Diego Valeri could just knock the ball away and it would probably go straight to Diego Chara. The Timbers would be fine, crisis averted. But that's more of a post-20th minute play; at this point the game is still young and the Timbers are still settling in and waking up, which is probably the second easiest scenario in which to score on them. (Who wants to guess what the first is?)

At this point, the Real Salt Lake's passing is so quick it's hard to freeze the picture in the right spot. With his first touch, Beckerman passes to Joao Plata. 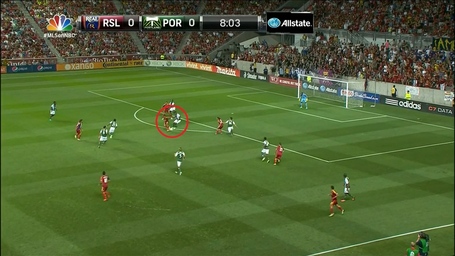 Plata, under good pressure from Rauwshan McKenzie, does his own one-touch pass, in behind Rodney Wallace for Luis Gil.

Now, do you guys remember why most Timbers fans have reservations about Wallace playing defense? No? He would like to remind you. 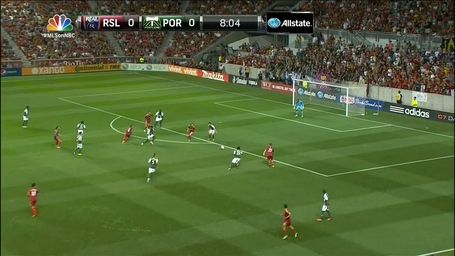 In the video, you can see that Wallace is following Gil as he jogs away from goal. As soon as Gil sees Beckerman's pass though, he cuts back towards goal, while Wallace continues jogging away from goal until he see Plata's pass. In other words, Gil is a step ahead of Wallace the whole way. Above, you can see Gil slipping behind the defense, while Wallace has finally caught on to what is happening and is attempting to recover. 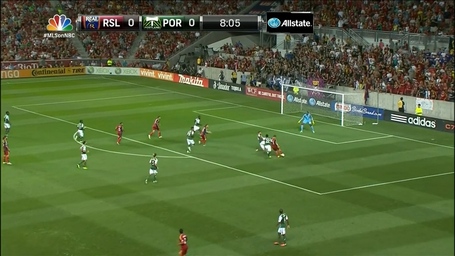 It's too late, of course. Ben Zemanski makes a valiant attempt to cut Gil off, and he almost gets there, but Gil gets his far post shot off just before Zemanski slides in.

With the exception of Wallace losing track of Gil, there is nothing really awful about the way the Timbers defense played this. This goal is just an example of a couple of Real Salt Lake's major strengths: off-the-ball movement and quick passing. Interestingly, the Timbers seem to want those be their strengths as well, but more of their goals lately have come on counterattacks and moments of individual brilliance. Both of those pretty much describe the other goal I want to look at.

Michael Harrington gets us started on this one, as he easily picks off a pass from Alvaro Saborio intended for Tony Beltran. 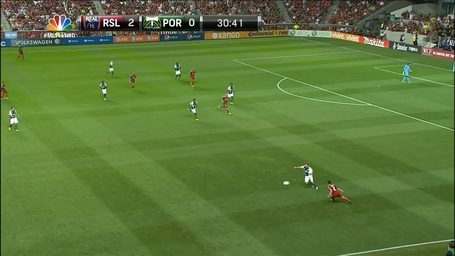 This is great, not only for the obvious reason that Harrington has the ball, but also because Beltran is way up field. Harrington takes off, and runs deep into Real Salt Lake's half. 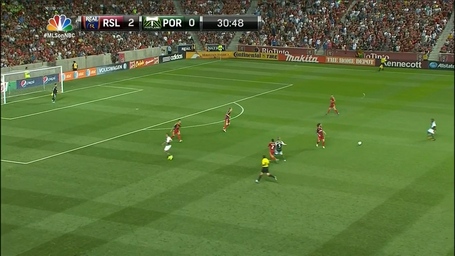 Just as Beltran has finally caught up with him, Harrington drops the ball back for Darlington Nagbe. Great vision from him to see Nagbe coming up behind him. 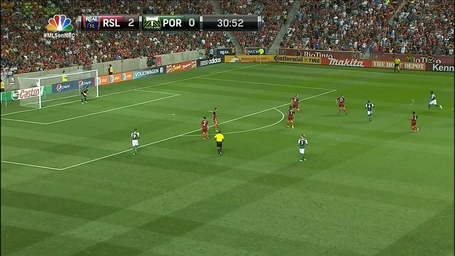 Chris Wingert and the rest of the Real Salt Lake defense are giving Nagbe way too much space, in part because they also have to worry about the run from Kalif Alhassan, coming in at the far right of the frame. If Wingert over-commits, a simple touch from Nagbe puts Alhassan in behind with a chance to cross the ball in. But as long as the defense is giving him all that space... 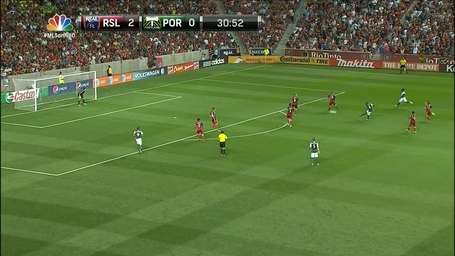 Nagbe takes it himself and rips a shot off from outside the box. It splits the defenders, bounces off Nick Rimando's outstretched hand and into the net, and cuts the Timbers deficit in half. We might have gotten to see a familiar storyline play out, were it not for the injury to Diego Valeri, the red card to Ben Zemanski, and the existence of set pieces.

One reason Real Salt Lake has been such an interesting and frustrating match-up for the Timbers is that the teams are playing similar styles of soccer, but Real Salt Lake has had a little more experience with it. Caleb Porter has talked about "possession with a purpose" and the first two goals of the game pretty well exemplify that. With all that quick passing, movement off the ball, and time spent with the ball in their possession, the offense is supposed to eventually find a way to unlock the other team's defense. They were great at that. We will hopefully get there, the sooner the better.