With tomorrow's match against Toronto coming up quickly, the Timbers made their final preparations in this morning's practice.

The Portland Timbers trained at Jeld-Wen Field today ahead of the team's match against Toronto FC tomorrow. With a depleted squad available, Caleb Porter held a long team meeting to start off the session as the Timbers look to cobble together a lineup for tomorrow night.

While the team is still missing several players, they will have Will Johnson and Diego Chara back together in the midfield for the first time since the Timbers faced the Philadelphia Union in mid-July. The pairing will lend the team some defensive bite in the midfield, according to Porter.

They bring what they brought the first seventeen games: they bring a presence in the center of the park. Games are, a lot of times, won or lost in the center of midfield in terms of ball winning and possession. These two guys are two of the best in the league and when they play together they are very destructive defensively in winning balls and ripping the heart out of an opponent.

Porter also pointed out the contributions that the Chara-Johnson pairing can have on the Timbers' offense.

On the ball they are tough to deal with because they can step forward into the attack and create problems for the opponent as well. The two of them together is a good combination. It really helps us in the center of the park to control games and disrupt the opponent.

In recent games, the missing piece of the partnership has been Will Johnson as he recovers from an avulsion fracture in his shoulder. When asked what Johnson's return brought to the team, Porter focused in on the mental aspect of the game.

He's our captain. There is a reason that we named him our captain; he's an experienced player and he's a leader. He knows what it takes to win and he is a smart player, he knows how to manage a game. That experience is invaluable. We are still a club that is learning how to win games and grind out results. We haven't ground out results recently and we have fallen short a few games and he is a guy that helps with that.

Will Johnson was back on the pitch training with the rest of the team again today, as he has since the beginning of this week. When talking about Johnson after practice, Caleb Porter made regular references to Johnson pairing up with Diego Chara in the midfield and said, "It's nice to have Johnson back."

Futty Danso also continued training with the team today and should be available for tomorrow's match. Of all the players returning from injury, Futty seemed to be the one who did not have any hesitation in the warmups, running and cutting smoothly throughout.

Jack Jewsbury, Frederic Piquionne, and Diego Valeri were all absent from today's warmups and look like they will not be available for tomorrow's match. Valeri was spotted after practice had concluded, coming off the pitch with trainer Nik Wald.

Bright Dike and David Horst both trained with the team today. The pair are coming off of their first appearances with the reserves last weekend since each underwent knee surgery at the beginning of the season. According to Porter, Bright Dike is completely healthy and will be on the bench tomorrow, while David Horst is behind Dike in his recovery and will likely play 45 minutes with the reserves on Sunday. 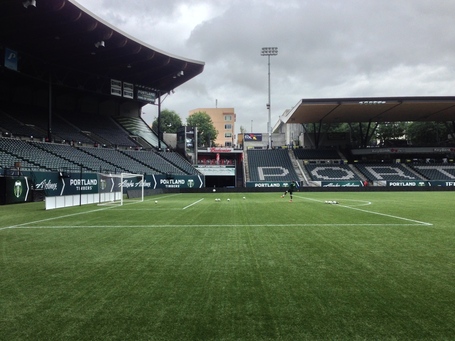 After was over and everyone else had gone inside, Dike returned to the field to take a few shots on goal before heading back indoors for the usual post-practice treatment.