After seeing plenty of movement from Gaston Fernandez during the pre-season, the attacker was uncharacteristically stagnant in his MLS debut.

Two weeks ago following Portland's 1-0 pre-season loss to San Jose, we took a look at Gaston Fernandez and his movement around the pitch. I praised Fernandez for his ability to explore the entire field, and do it quickly. But Saturday's season-opening 1-1 draw against Philadelphia saw a much less mobile, dynamic performance.

Ultimately, this post will lead to one main question: Where is "La Gata" best suited to play? It's a question that probably won't have an answer until a few more games are completed, but we at least have a modicum of evidence with which to begin the conversation.

Fernandez' movement and creativity were on display against San Jose as he embraced the #10 on the back of his shirt, positioned in the middle of the field in Diego Valeri's normal spot. But against the Union he was pushed out wide to the left. Porter clearly sees the foursome of Valeri, Fernandez, Darlington Nagbe, and Maxi Urruti as his best attacking players, but with Valeri's genius in the middle of the field and no evidence that Urruti can play out wide, that leaves Nagbe and Fernandez to run the flanks. Over the years Nagbe has adapted to starting in wide areas and finding time and space to come to the middle (no doubt helped by Porter and his system), and now Fernandez may have to do the same.

Here's the Opta Chalkboard of every Fernandez event from the first half: 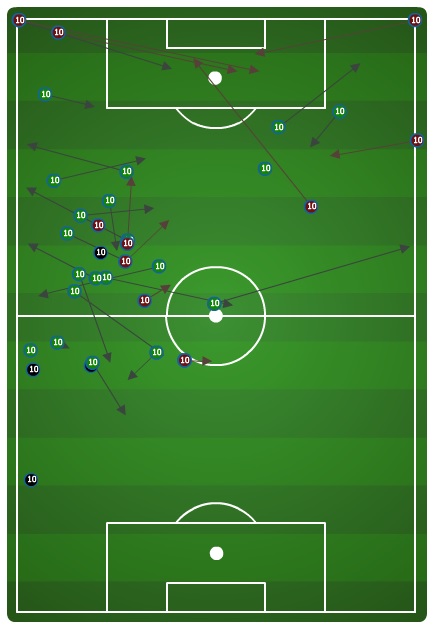 At a glance it appears like La Gata got involved a little on the right-hand side, but four of those six events took place in the 39th and 40th minutes when Fernandez went across the field to take a corner. So aside from one foray past the center of the field, Gaston was pretty well glued to the left sideline---much like Rodney Wallace was last season. But Wallace and Fernandez are different players, and it may be fair to invoke an old John Spencer-ism ("square pegs, round holes") to describe Saturday's uninspired performance from Fernandez.

For a bit more context, let's look at Valeri's actions: 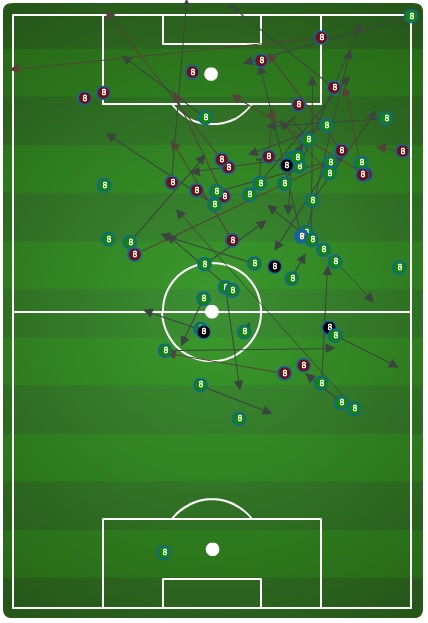 What can we tell from looking at that map? Valeri likes to combine with Nagbe, doesn't he? (Valeri combined with Nagbe 21 times, more than any of his other teammates. Likewise for Nagbe.)

Valeri and Nagbe getting on together is totally fine---that is, when you've got a Wallace or Steve Zakuani type of player on the left who doesn't mind being a little more isolated. But as we saw throughout the pre-season, Fernandez isn't a huge 1v1 guy. He likes to combine; he likes interplay and exchanges and movement.

Now take a look at Fernandez' chalkboard in the last 20 minutes when he moved up top after Urruti was subbed out: 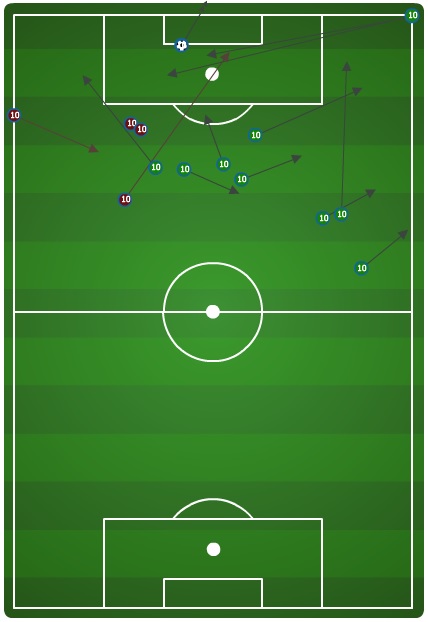 Granted, we don't have a ton of information/history with Fernandez, but this looks more representative of the glimpses we've gotten of him.

Obviously we're just one game into a very long season, but it's never too early to be curious about how all the pieces will fit together. Does Porter's preferred attacking four have the right chemistry/styles to score goals consistently? Is the attack missing a piece like Wallace or Zakuani or Alhassan? Is Fernandez a better option to start up top than Urruti? Or can Gaston adapt his game to fit what's needed from a player who will typically be a tad more isolated on the left side?