There is a lot that hasn't been going right for the Timbers on the attack lately. Let's take a closer look at something that did.

Stumptown Breakdown is back and while it's really tempting to just analyze the penalty kick (Donovan Ricketts dove to his right, the ball went to his left, done) and call it a day, instead I'm going to take a look at the Portland Timbers' equalizing goal against the Chicago Fire.

First, Diego Chara recovers an attempted clearance by Chicago and sends the ball back forward for Jack Jewsbury to chase deep into Chicago's half. 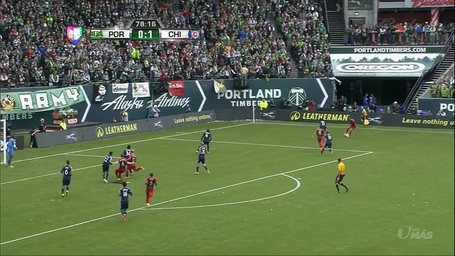 At first, Jewsbury looks like he's thinking of crossing the ball in or maybe switching the field, but Gonzalo Segares and Harrison Shipp move in pretty quickly to try to close down those options. In doing so, they leave Diego Valeri unmarked. 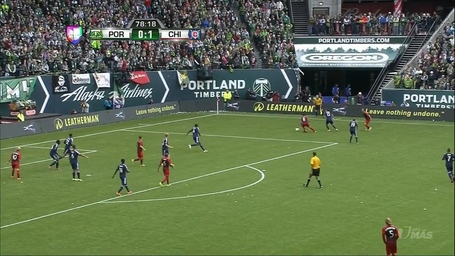 This allows Jewsbury to slip a pass in behind Segares to Valeri. The quick move surprises Segares and frankly maybe surprises Valeri a little too, but he's able to catch up to the pass. 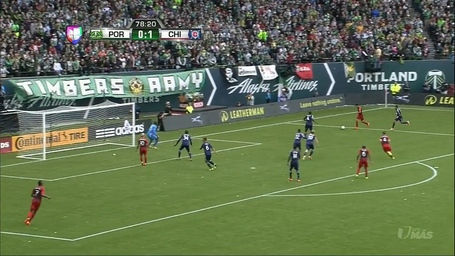 Now Valeri has a little space and time to survey his options. He decides to cut it back to Nagbe at the top of the box. 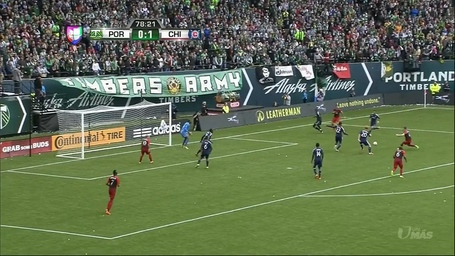 Will Johnson lunges for it, but thankfully lets it go at the last minute. With two defenders in front of him and Sean Johnson at the near post, he doesn't have a great chance at making that shot. But as he makes a play for the ball, he pulls those two Chicago defenders closer to him and out of the middle. 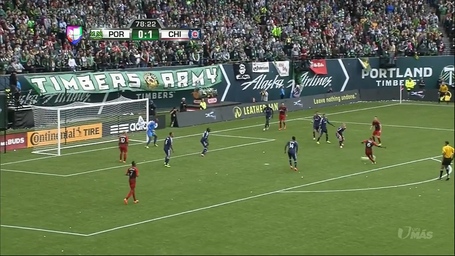 That means that the Fire defense has basically parted ways for Darlington Nagbe as he receives the ball at the top of the box. No blocked shot for the Timbers this time; Nagbe has a clear look at goal. 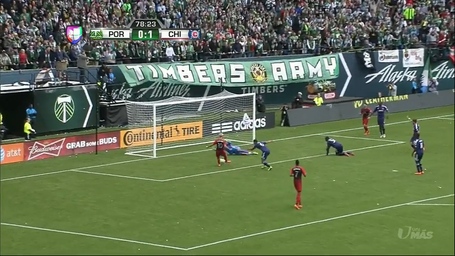 Unfortunately he still can't quite get his shot past Johnson, but he puts enough power on it that the Chicago keeper spills the shot, right to the waiting feet of Gaston Fernandez, who has barely moved from his spot near the far post since the play began. It's an easy tap-in for La Gata.

Aside from the finishing, this play wasn't necessarily all that different that some of the other best scoring chances for Portland. The Timbers were getting a lot of their chances by doing similar things. The Timbers had, for example, another good chance on a shot from distance and the ensuing rebound, with Valeri taking the initial shot and Steve Zakuani following up, before the whole thing dissolved into the pandemonium that ended with Will Johnson's attempted bicycle kick.

There were also two excellent chances for the Timbers that were similar in their build-up to the goal. Both the 56th minute double-miss by Fernandez and Maximiliano Urruti and Jewsbury's cut back to Fernandez at the top of the six-yard box in the 87th minute were plays built up the right side. Like the play that ended with the goal, they led to good scoring chances in part because the Timbers were able to draw defenders out of position and/or strike before the Fire could really get packed into the box.

Of course there were also chances that looked nothing like the scoring play, like Will Johnson's open-goal miss after Sean Johnson's botched clearance. All in all, the Timbers are getting their chances and they are seemingly getting more of them than any other team as they currently lead the league in shots. They also got more chances--both in terms of shots and in terms of truly dangerous opportunities--in Sunday's game than in the home opener. So at least they seem to be moving in a good direction. Really the biggest piece that is missing for Portland right now is the final touch, the one that puts the ball in the back of the net.

That's why I think the people who are a little disappointed to see Fernandez's goals come off such wide open poaching opportunities have the wrong outlook. The Timbers are struggling to finish and their opponents are happy to put a bunch of players in front of them in the box, which is probably one factor that has contributed to the impressive 17 shots the Timbers have had blocked so far. With all that going against them, Portland needs someone to finish the few easy chances they're going to get. The goals are probably going to start coming in other forms soon, but in the meantime, we are lucky we have someone with a bit of that poacher's instinct, or we could be looking at two 1-0 losses so far.