Slip-ups by the Timbers defense led to two penalty kicks just minutes apart. Take a look at what went wrong.

Share All sharing options for: Stumptown Breakdown: Run of Play

The Portland Timbers have not allowed a goal from the run of play in 2014. It seems like everyone knows that by now, because the stat has been mentioned a number of times, including by Caleb Porter, and its significance or lack thereof has been debated in the comments on this site.

Although goals from set pieces and penalty kicks do, of course, have the same value as any other goal, it still seemed like a strength that the Timbers' defense have conceded no run-of-play goals. If the Timbers are already limiting their opponents' chances to set pieces and penalties, then they just have to tighten up a couple areas and they become an extremely hard team to score against, let alone beat.

After this weekend though, when two huge defensive mistakes would have almost certainly led to run-of-play goals by the Colorado Rapids had they not ended in penalties instead, to repeat that stat as if it is an accomplishment seems to obscure the truth a bit.

The goals themselves didn't leave me with a lot to look at this week, so instead I'm breaking down the two defensive mishaps--breaking down the breakdowns, if you will--to take a look at where the Timbers are going wrong during the run of play.

Here is the first penalty call:

The play starts with a purposeful long ball from the back line that actually goes to an open Rapids player. (Imagine that!) 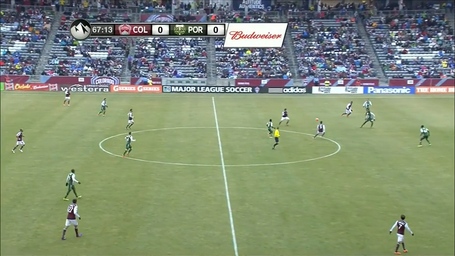 Edson Buddle brings the long pass down and quickly plays it square for Dillon Powers. 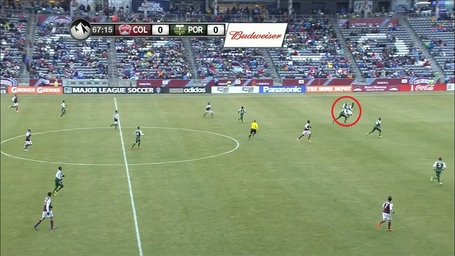 Powers plays the ball over the top of the defense to Deshorn Brown who makes a run right between Futty Danso and Jack Jewsbury, all in the red circle. It seems like Jewsbury, Futty, and the rest of the defense is trying to hold their line and catch Brown offside, which is a really risky move with someone that fast. It burns the Timbers this time, because Brown times his run perfectly. 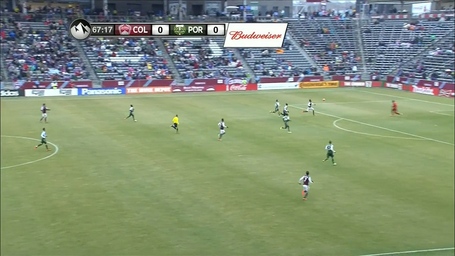 He is off to the races, leaving the defense no chance of catching up, and we all know what happens after the frame above.

This first play by the Rapids highlights one very significant weakness of the Timbers' defense: no one is fast. They are fast enough to face most players in MLS, but neither of our first choice outside backs and none of our center backs have even the vaguest hope of recovering if someone like Brown gets past them. The defense did well to prevent something like this as long as they did, but Colorado had clearly figured out that using Brown's speed might be a good way to beat the Timbers. It took a little while, but eventually it did work for them.

About the only solution the Timbers have to this problem without changing their roster up is to play Alvas Powell in place of Jewsbury when they know they're facing a team with a speedy winger. Of course what the Timbers gain in speed by playing Powell, they lose in maturity. Jewsbury isn't fast, but he does usually bring good positioning, solid decision-making, and a smart read on the game.

Here's the play leading to the second penalty:

Again the play starts with a ball coming from the Rapids' back line, but this one is less of a pass and more of a clearance. 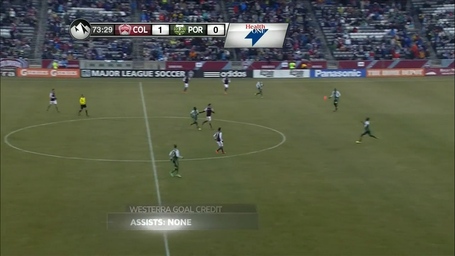 In the frame above, the long ball is falling toward Pa Modou Kah. You can see from the picture that Kah has time to settle the ball and he has a few options once he has possession. He could play the ball square to Futty, or back to Andrew Weber, or probably forward to Michael Harrington who is standing at about midfield. Basically he needs to do anything other than what he does next. 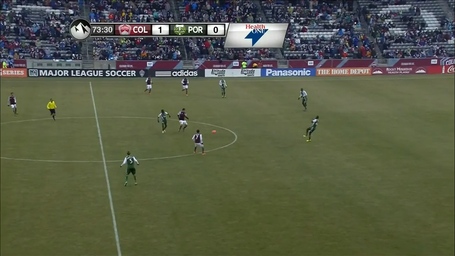 He tries to play it forward on his first touch, probably trying to boot it up-field, but he hits it all wrong and it goes right to Powers. 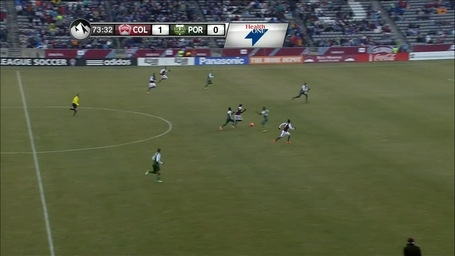 Kah tries to hold his ground and poke the ball about from Powers, but the Rapids midfielder blew past and Kah falls or gets knocked over, taking Chara down with him and leaving Futty trying to defend Powers and Vicente Sanchez on his own. 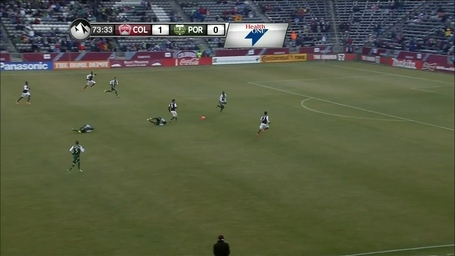 It just takes a simple pass from Powers to put Sanchez in for a 1 v 1 with Weber, and again, you all know how it plays out from there.

This play demonstrates another problem the defense has struggled with so far--their passing. The numbers themselves are not all bad. Kah has a fairly unimpressive 67.65% average passing accuracy so far, but Norberto Paparatto is doing better with an average of 72.15% and Futty has a pretty respectable 84.53%.

What's more concerning than just the numbers is the fact that this is far from the first time the Timbers have turned it over in their own half, even under minimal pressure from the opposing the team. In the home opener, for example, Paparatto launched a scary attacking opportunity for the Philadelphia Union when he sent a sloppy pass straight to Cristián Maidana. Like Kah and his turnover to Powers, Paparatto wasn't under much pressure, he was just careless.

It isn't just the defenders who have struggled with this. The whole team's passing has been a little off early in the season and by that metric Colorado was their worst outing so far, with their lowest passing accuracy of the season plenty of dangerous giveaways in their own half.

If the Timbers want to continue not conceding any run-of-play goals (and ideally stop conceding penalties as well) their passing is going to need to come together and they'll have to find a way to cope with the league's faster players. For now, the fact the the Timbers have conceded no goals from the run of play seems like more of a fluke than an impressive statistic.