FC Dallas snags a goal just before halftime on a major defensive lapse by the Timbers.

Share All sharing options for: Stumptown Breakdown: Outnumbered and Ball-Watching

The first half of the Portland Timbers' match against FC Dallas went a little haywire near the end, with red cards issued to a player from each team for an event the cameras hadn't caught, followed by an apparent injury to Darlington Nagbe. It still looked like the Timbers would go into halftime level and get a chance to regroup, but they didn't quite make it.

Kellyn Acosta receives the ball on the Timbers' left flank, where Jack Jewsbury has moved to fill the space left by Michael Harrington's sending off. 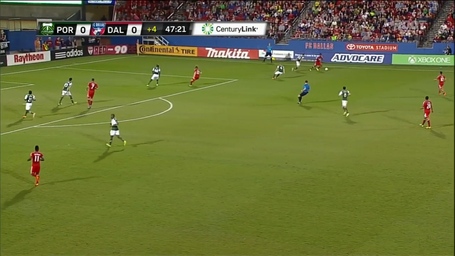 First Acosta simply tries to beat Jewsbury with speed, but the veteran isn't making that so easy for him, so he pulls back and drops the ball to Mauro Diaz. 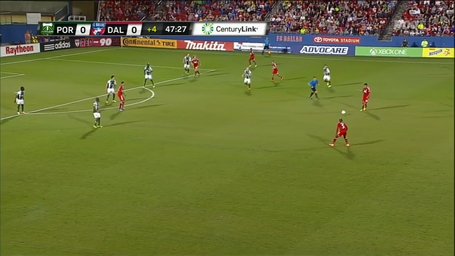 With a couple quick passes Dallas gets the ball into the middle to Victor Ulloa, who in turn lays it off for Jair Benitez, who has made the run forward from the left back spot. 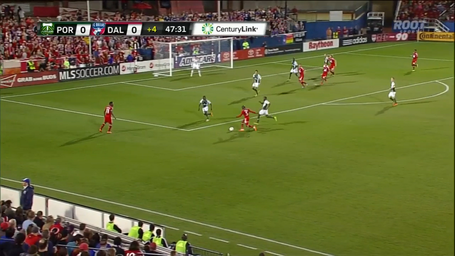 Nagbe steps up to defend Benitez as he brings the ball forward, but with the injury he has picked up just minutes before, he isn't nearly fast enough to stop him. Diego Chara, playing right back, slides over to help, but can't get there in time to stop the cross from Benitez. 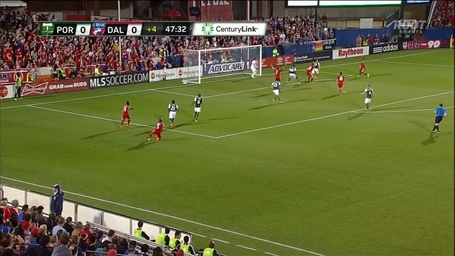 These last two frames are where things get really frustrating. Here, Acosta is running in to the box unmarked to get on the end of the cross. He's unmarked because Jewsbury and the two center backs are outnumbered in front of the goal, while Will Johnson stands at the top of the box ball-watching. Diego Valeri too, is just outside the picture. With one outside back playing on the wrong side and the other outside back position being filled by a center midfielder, these guys need to be stepping up their defensive efforts. Even a struggling Nagbe is in the mix trying to defend. There's simply no excuse for Johnson to be standing at the top of the box watching things unfold.

In any case, Acosta runs into the box and Jewsbury slides over to cover him but he's just a little too late. 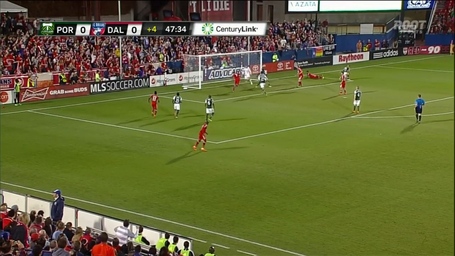 Acosta heads the ball back across the box to a waiting Blas Perez, seen here heading the ball in the open goal in front of him. He too is wide open, in this case because Norberto Paparatto, like Johnson, seems to be aware of little other than the ball itself and has let Perez slip away from him. The one defense that could be offered for Paparatto is that he may be dropping off expecting Acosta to cut the ball back to Mauro Diaz, who is open right around the penalty spot. If that's what he's doing, he made the wrong choice, though if the Timbers weren't outnumbered, he wouldn't have to decide which of two opponents he can more safely leave unmarked. As it is, he leaves Perez open and neither he nor Pa Modou Kah can get to him before he scores.

I almost chose the other Dallas goal because this one seemed a little flukey, what with both outside backs playing out of their usual positions and Nagbe injured. But this goal happened because the defense lost their shape, and experiences an obvious failure to communicate, and I think those are exactly the sort of problems the back line this weekend might be vulnerable to.

There will, at the very least, be a different outside back in Harrington's absence (likely the inexperienced Alvas Powell) and we'll probably be seeing Jewsbury on the left again, clearly not the side of the field where he is most comfortable. As Will wrote yesterday, there is also a chance that the MLS Disciplinary Committee will decide to punish Kah for a pretty heavy challenge in the second half, which at least a couple neutral-ish observers thought should have seen a red card.

So the back line will undoubtedly be different, potentially making them more prone to the same type of mistakes made on this goal. The Seattle Sounders will be looking to take advantage of that and their offense has the tools to do it. We'll have to hope the reserves step up and the starters who have been a little off figure out how to flip that switch back on. They're facing the Sounders, in search of their first win of the season; they should have plenty of motivation.