Stumptown Breakdown: Portland Timbers and Chivas USA Split the Goals and the Points

The Timbers struggled at both ends of the pitch in their draw with Chivas.

Share All sharing options for: Stumptown Breakdown: Portland Timbers and Chivas USA Split the Goals and the Points

The Portland Timbers were so close to their first win of the season, albeit a rather lackluster one, over Chivas USA, but they fell apart late in the game. This week we're taking a look at both goals.

The Timbers got things started with this one:

First Kalif Alhassan, probably aiming for Maximiliano Urruti, puts too much on his cross and misses everybody on the Timbers' attack. 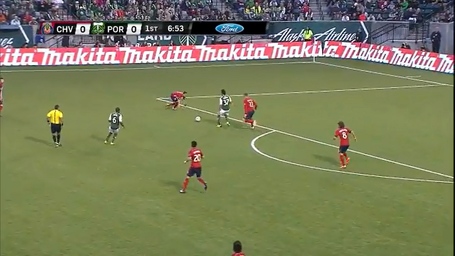 Eric Avila brings the ball down instead, but fortunately his first touch is a little sloppy and he also slips a bit on the turf. Urruti and Darlington Nagbe are both following the play, presumably ready to try to win the ball back, so Urruti easily gets to the loose ball first and plays it back to Nagbe in space. 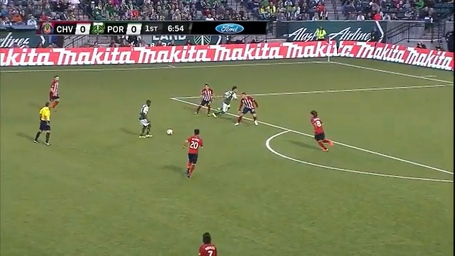 Urruti then makes a run between the two defenders but--surprise!--he's offside almost as soon as he begins the run and before Nagbe has a good chance to play the ball back to him. 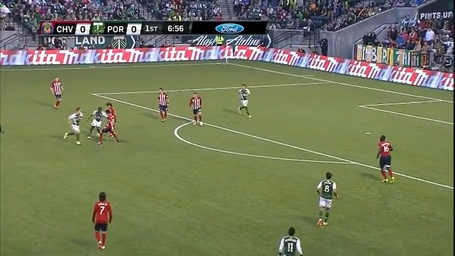 Agustin Pelletieri and Carlos Alvarez quickly move in to close Nagbe down, but Will Johnson makes a late run from midfield and as he runs past, Nagbe is just able to slip the ball between the Chivas players to his teammate. 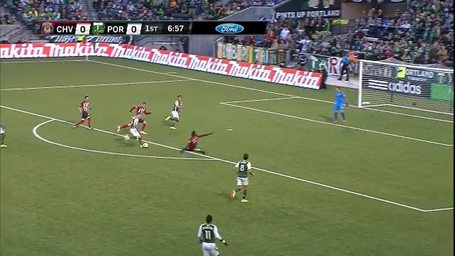 It's just how the captain likes it. He runs onto the ball and, with the sort of accuracy we haven't seen much of yet this season, fires a low shot just under a diving Dan Kennedy and inside the near post.

The major caveat that has to be mentioned here is that center back Carlos Bocanegra was off the pitch at the time of this goal, waiting for the referee to waive him back in. His presence might have made things a little harder on the Timbers in this instance.

With that said, I don't think it takes too much away from the quality of the Timbers' play. The pass from Alhassan was admittedly poor, but in many ways this goal showcases a lot of what the 2013 Timbers were best at on the attack--the high pressure so that they can force or take advantage of a mistake by the defense, Nagbe's brilliance even as the defenders try to box him in, and the late run from Johnson that the opposing defense never seems to properly anticipate.

The Timbers' flaccid attack this season has been extra frustrating since they pretty much had all the tools and strategies they need in place last season. This year, it's as if they've moved away from everything they did that worked so well, or they have lost touch with it.

After the Timbers mostly had their way with Chivas last season, lots of fans were clearly hoping for, maybe even expecting, a blowout by the Timbers. Even so, most of us probably would have settled for this scoreline and felt some relief. But of course it didn't end like that.

Chivas' goal starts with Andre Jean-Baptiste because of course it does. He chips the ball up the left side for Leandro Barrera. 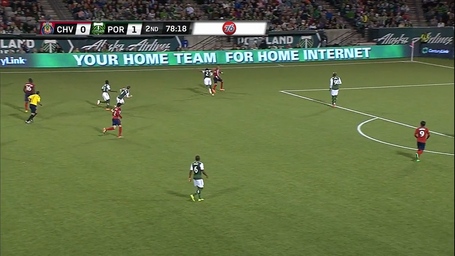 In the frame above, Alvas Powell takes a step out in front of Barrera to head the ball away, but he misses. This sort of defending is a double-edged sword. If a player steps up and cuts off the pass, it was a good, proactive defensive play that stopped the attacking chance before it could really start. If he misses though, the play was risky  and he has made a potentially big mistake by letting his mark get on his goal side with the ball. Norberto Paparatto has several interceptions to his name thanks to plays like this one. He's also missed the ball, been caught out of position, and conceded a penalty kick.

Unfortunately for Powell, this play is the latter type--a big mistake. 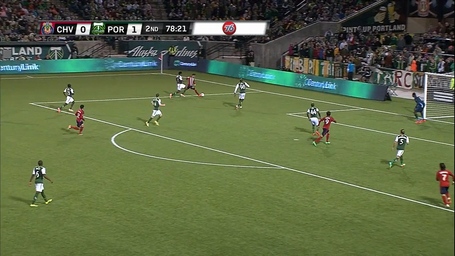 Once Powell misses the header, he never quite catches up enough to recover his position and defend the cross. Barrera plays it in to a wide open Erick Torres 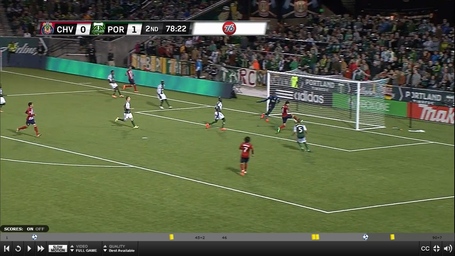 And that brings us to the other big defensive blunder on this play. It's Pa Modou Kah's responsibility to mark Torres, but he only has eyes for the ball. Torres slowly drifts away from him, accelerating his run just as Barrera prepares to play the ball into the box. Kah isn't paying any attention to Torres, so he's wide open just a few feet from goal.

But, some of you have pointed out, Harrington is actually facing Torres and able to see him. Why doesn't he mark him? Because Chivas has more that one attacking player. While Harrington is trying to get in the box where he might be helpful, he also doesn't want to lose track of Mauro Rosales. As you can see in the first replay of the goal, he repeatedly looks over his shoulder, checking to see where Rosales is, anticipating a run into the box or a cross to him, while also watching Barrera and the ball (you know, the way a defender is supposed to).

By the time it becomes apparent just how oblivious Kah is, the cross has come in and Harrington doesn't have time to react and cover for Kah. And he shouldn't have to. Credit to Torres who makes a good run, hanging out near Kah almost as if he's actually being marked, then getting into space right before the cross from Barrera comes in. There's no excuse though for Kah to be so fixated on the ball and to simply forget Torres. Even though he can see that Futty Danso is trying to provide cover for Powell and he should know Torres is his responsibility, he never once looks to see where the Chivas striker is. It's inexcusable.

As for his reaction after the goal, I'm with Chris Rifer on this one:

Final volume of my Kah rants. Kah owes Harrington a 6-pack of beer for immediately blaming Mikey for the concession. What a joke. #rctid

The defense, Kah included, had a decent game up until this moment, but one moment and a couple of glaring errors on defense were enough to throw away two of the Timbers' three points.