Stumptown Breakdown: Real Salt Lake Excell at Movement Off the Ball; Portland Timbers Not So Much

One highly successful element of Real Salt Lake's attack, and their goal on Saturday night, was the movement of players who didn't have the ball. Portland struggled with the same at their end of the field.

Share All sharing options for: Stumptown Breakdown: Real Salt Lake Excell at Movement Off the Ball; Portland Timbers Not So Much

On Saturday night, the Portland Timbers put together one of their better overall performances against Real Salt Lake, with the offense testing Nick Rimando on several occasions and the defense limiting their opponent to just three shots on target. Real Salt Lake capitalized though on one good attacking chance, while the Timbers failed to answer with any magic of their own.

This week, in addition to looking at what went wrong for the Timbers' defense as I usually do, I want to focus more on what Salt Lake did well that the Timbers couldn't quite match at the other end.

Here is the game's only goal:

There's not much in the way of build-up and the highlight video would lead you to believe there wasn't any, but first Sebastian Velasquez gets the ball on the far side. 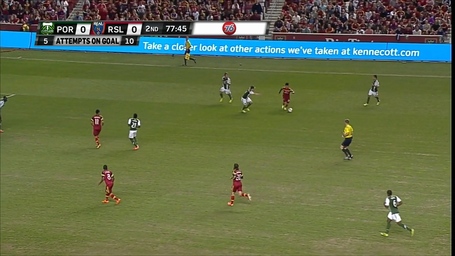 No problem here for the Timbers. Will Johnson and Michael Harrington close him down, and there's not overlapping run, so the next pass is definitely going to the center. Darlington Nagbe, who was looking completely gassed on the play just before this, anticipates the pass and finds a burst of speed that takes him from this position... 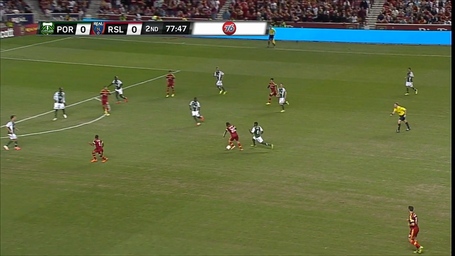 to pretty much right on top of Ned Grabavoy as he receives the pass. 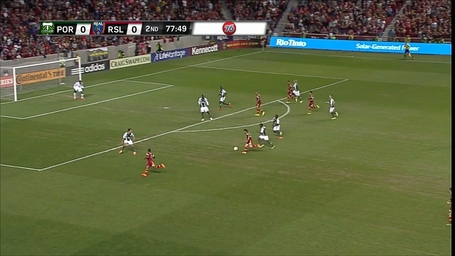 Nagbe is still dragging though and he doesn't have quite the good position on Grabavoy that he wants to have in order to close down the danger. He needs one of his defenders to step up and help. Diego Chara tried to catch up but he, like Nagbe, seems to be missing a step after pulling up limping earlier. Joao Plata makes a clever run wide to pull Jack Jewsbury out with him and make space for Grabavoy in the middle. Three more runners are occupying the other three defenders and Johnson.

That's four Timbers though, covering just three Salt Lake players and Futty Danso, who is closest to Nagbe and Grabavoy, could and should leave Pa Modou Kah to mark Alvaro Saborio while he steps up to help Nagbe. Jewsbury, to his credit, realizes that Grabavoy is going for goal himself, leaves Plata our wide, and tries to stop the shot. It's just too little, too late. 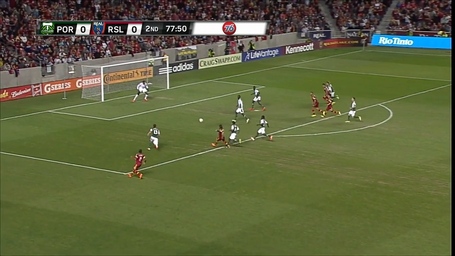 You can see the affect that Real Salt Lake's off-the-ball work had in this frame, where Grabavoy has a pretty wide open look at goal, thanks to his teammates keeping all of Portland's defenders occupied.

Now compare Plata--both making himself open for a pass and pulling his defender out of the center--and Salt Lake's numbers in the box with a couple of the Timbers chances of the night. 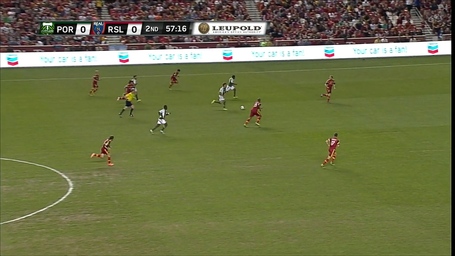 This is from the chance by Maximiliano Urruti that Rimando just managed to tip onto the crossbar. On the sideline, Urruti chips the ball over his defender, then runs onto himself, even though Nagbe is right there. It's a minor miscommunication by the Timbers attack, but then Nagbe just runs alongside Urruti. Theoretically, he's open for a pass, but what a useless pass that would be, just a couple yards to Urruti's left. Plus, it's so simple for the back line of Real Salt Lake to mark them both when they're running up the field right next to each other. 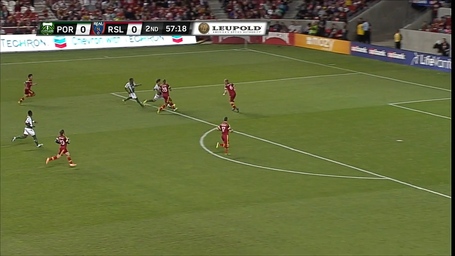 As Urruti runs into the box, Nagbe finally starts jogging and drops to an even more useless position right behind his teammate, so close it almost looks like he could clip his heel. Urruti has no choice by to take a shot and he does manage a good one, but there's no one making a run to pull one of those defenders off and give him a better angle, no one to follow up the shot in case of a rebound, and no one to stop Rimando from committing fully to a position that lets him just barely get his finger tips to Urruti's shot.

It's not just Nagbe's bad run that leaves the offense lacking options; their are simply not enough green shirts in the picture. Kalif Alhassan and Diego Valeri are both too far behind the play to help (and are also not in positions where they might at least stretch the defense). Everyone else is hanging back around midfield. We see a similar issue on a play by Michael Nanchoff later. 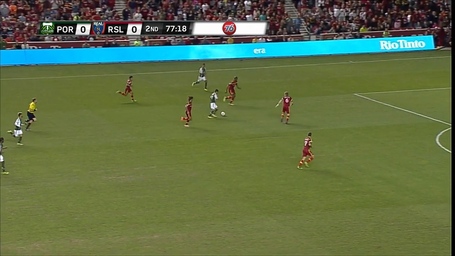 Again, Nanchoff doesn't have any really good options except to shoot. This is the play right before the goal where, whether due to some knock he picked up or just do to exhaustion, Nagbe is jogging well behind the play. Gaston Fernandez is trying to catch up and again, Johnson, Chara, and the outside backs are nowhere to be found.

So the Timbers aren't making great runs and they aren't getting the numbers forward that they want and probably need, and to add to their problems, Urruti, though he stays onside in the picture above, too often takes himself out of the play by being in an offside position.

This is one more instance of the sense I mentioned last week that the Timbers seem to have forgotten the things they regularly did well last season. They certainly had the odd game (usually against Real Salt Lake) where it felt like there was never anyone in the box except the center forward, but it wasn't the norm and they didn't usually have trouble making good runs and making things tough for the opposing defense. It's how they scored an impressive 54 goals last season, and it's about time for them to find that magic again.