Stumptown Breakdown: From Out of Nowhere

The Portland Timbers showed entirely too little offensive flair on Sunday, but still managed a surprising equalizer against Houston.

Share All sharing options for: Stumptown Breakdown: From Out of Nowhere

Did anyone really see that goal coming? And are we always going to need a freaky deflection to score in Texas this season?

The Portland Timbers' goal on Sunday seemingly came from nothing and like their last goal in Texas, it required a little help from their opponent, in this case the Houston Dynamo.

The goal comes after one of the Timbers' lone spells of "possession with purpose," though it takes a little while to get to the purposeful part. After a bit of the back-and-forth passing that lulled many to sleep on Sunday, the ball finds its way to Darlington Nagbe. 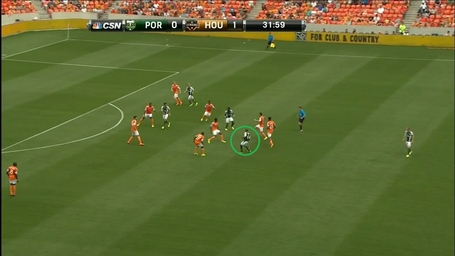 Nagbe, in the green circle above, is quickly surrounded by what seems like every player on the Dynamo roster. It's not as though any of them have anywhere else they need to be; most of the Timbers attack is clustered there in the middle too. It's a wonder anything came of this play, because the middle is so bottled up, and there doesn't seem to be anyone providing any width. Usually this would make it easy for the defense to shut things down.

In the crowd, Nagbe does manage to pass to Kalif Alhassan, a few yards away from him. Alhassan wisely turns to dribble out of the traffic and create some space. 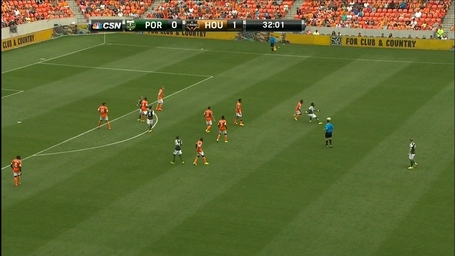 Under pressure, Alhassan lays the ball off to Jack Jewsbury, who isn't in the frame above, but is making a run up the sideline. 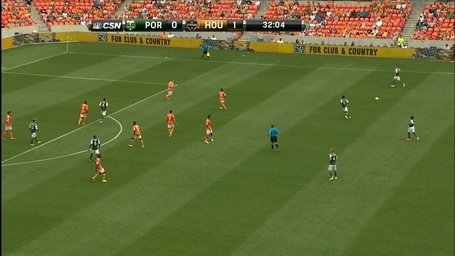 When the defense drops off, Jewsbury plays it back to Alhassan, who dribbles up the field. Just as Brad Davis and Corey Ashe step up to close off his options, he slips a pass between them. The Timbers have spread out a little bit now and given themselves quite a bit more space. Nagbe makes a strong run in anticipation of the pass from Alhassan. 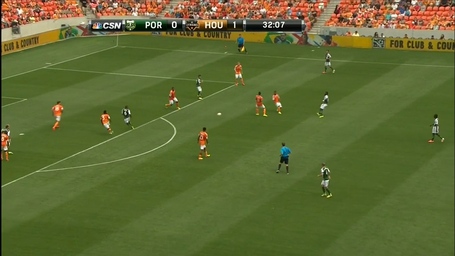 Then comes the deflection, so unfortunate for Brad Davis and so helpful to the Timbers that it earned Davis a Timbers' MOTM nod from one of our own writers. 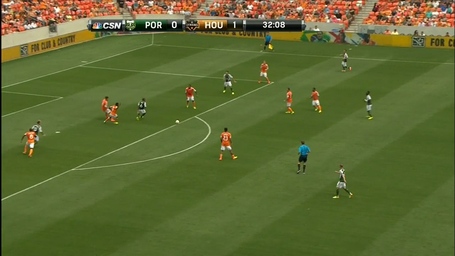 It seems to put a weird spin on the ball, and a pass that looked destined for Nagbe is now behind him. It looks unfortunate at first, but Nagbe has pulled two defenders with him away from the ball, and the Timbers have a player who knows how to capitalize on such situations and who just happens to be making his first start this month. 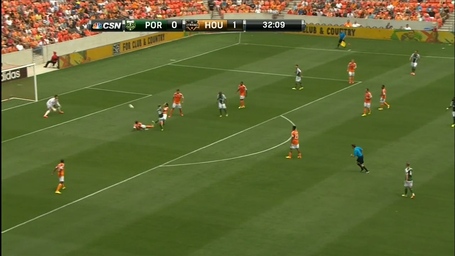 Gaston Fernandez is relatively open thanks to Nagbe's run, and he jumps on the chance with--dare I say it?--catlike reflexes and does exactly what needs to be done. He hits it first time before the defenders slide in to block the shot (any longer and the opportunity probably would have been lost) and he not only keeps it on frame, but puts it high into the corner where Tally Hall can do nothing about it.

At this point it feels like the Timbers are just teasing us. We've gotten to see these little flashes of last year's attack, which could pull apart defenses, pounce on mistakes, and make the absurd happen. We get glimpses of what a great finisher Fernandez can be and what a knack some of our midfielders can have for picking out just the right pass. But the floodgates have not opened as promised, and instead of truly unleashing their offensive weapons on an opponent, the Timbers have been far more likely to simply score one goal and then receded into the boring, ineffective, almost timid shell in which they've been hiding for most of this season.