Seattle gets an early lead thanks to the Timbers' other biggest rival--the set piece.

It was a little overwhelming to pick out one goal to analyze from the 4-4 goal fest that was the match between the Portland Timbers and the Seattle Sounders. Upon remembering this tweet from the weekend, however, I decided it was time to revisit a Stumptown Breakdown classic: the terribly executed set piece defending.

Here is the first goal of the game:

It's worth noting that Seattle earned their corner off a deflected shot by Osvaldo Alonso, which he had a chance to take thanks to a terrible giveaway from Diego Valeri. The Sounders also got their second goal thanks to a sloppy pass in the Timbers' half, this time by Norberto Paparatto. The Timbers have had more than their fair share of giveaways in dangerous spots and last weekend they got to see how a good offense will punish those mistakes. 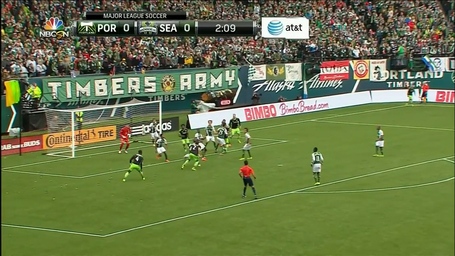 Gonzalo Pineda swings the corner kick into the box, where Jalil Anibaba is wide open in front of the far post. In this case the replay is better than the original shot for showing how he got so open. 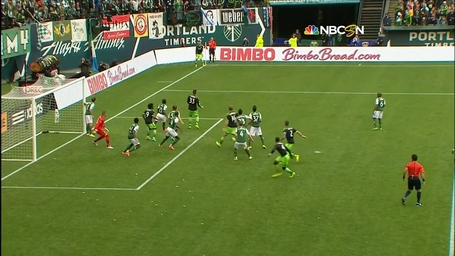 Both Anibaba and Clint Dempsey make their runs in from near the top of the box, while the entire Timbers defense is watching the ball and doing what they would probably call "zonal marking" and what I would call "not marking." Everyone has their backs to these to players. I'm not certain that Will Johnson is aware of Dempsey's presence until Seattle's multimillion dollar man bumps into him. No one really seems to notice Anibaba until he has the ball. 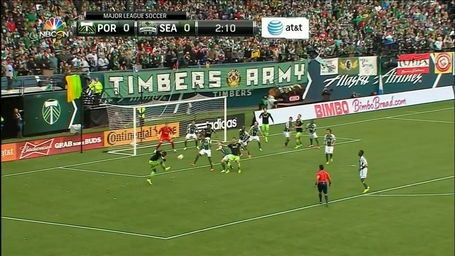 Anibaba takes one touch to send the ball back towards the goal. I think Set Piece Defending 101 teaches you that you need to be aware of both the ball and the player you're marking, and maybe one or two Timbers are doing that, while everyone else is just watching the ball. Once again, I think the replay angle gives a good view of the problem. 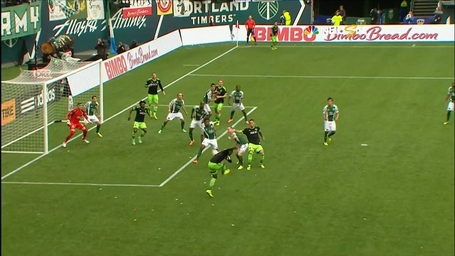 Both Michael Harrington and Pa Modou Kah seem focused exclusively on the ball, so that Harrington has allowed Kenny Cooper to drift away from him and Kah is leaving Obafemi Martins all alone right in front of the goal. Both of those players are people who you would ideally like to see marked in the box. 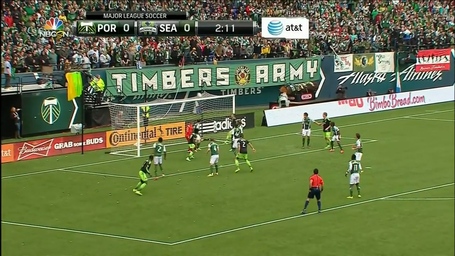 With both of them open, of course Seattle is going to score. Cooper easily pokes the ball home at the back post.

There were a couple games this season where I would have said the Timbers set piece defending was looking better. Though the Philadelphia Union scored their goal on set piece, it was an anomaly in a game where the Timbers were frequently winning the first ball and clearing out of the box quickly. Similarly, against Chicago and Colorado, set pieces were not the biggest defensive problem. But then the second goal by Dallas was reminiscent of 2013 set piece defending as the Timbers struggled to clear the ball and paid the price. So I don't know if this is a slip-up or a relapse, but it's infuriating.

It's possible that the real theme here isn't set pieces (we'll see about that as the season goes on) so much as the Timbers' failures to mark key players in a variety of situations. I talked about this last week when the Timbers got caught watching the ball and left Blas Perez unmarked. Caleb Porter mentioned it in his press conference over the weekend because it wasn't just a problem on this goal--Dempsey scored his two run-of-play goals under virtually no pressure from the Timbers' defense.

I don't know whether you pin this on a lack of communication, general disorganization, individual errors, or some combination of the three. In his press conference, it seemed like Porter was attributing the goals largely to individual errors, but when your whole back line is making frequent individual errors, it seems like there might be a bigger problem.