The Timbers closed practice back up today as they prepare for DC United.

The Portland Timbers practiced at the team's Beaverton training facility today, two days away from their upcoming home match against DC United this Saturday. The team held a closed practice today after opening yesterday's training to the press for the first time in several weeks.

As the press were allowed out to the pitch today the majority of the team were headed indoors, while several players remained outside, having an unstructured kick-around.

Michael Nanchoff, who has made substitute appearances in the Timbers' last two matches, talked about the team's attitude in training and how he continues to push himself.

It's a lot easier with a lot of good guys around you, with a lot of friends and teammates, especially when they come in with a big smile on their face and no-one is being negative toward anybody.

Being in a situation with a group of players that he is already familiar with helps, according to Nanchoff.

To have somebody like [Darlington Nagbe], I have known the kid since ten years of age and I can talk to him about just about anything, that makes it a lot easier. And all the other guys are fantastic, so that makes it easy.

As he gets more minutes for the Timbers, Nanchoff is just trying to play his game and keep working hard in practice.

I'm just trying to be myself. I don't want to go outside of that circle that I am not. Coming in day to day with a smile on your face I think that is the biggest thing to me. Everybody's different in terms of the motivational factor, but also being mentally tough is super-important too.

Diego Valeri was with the team leaving the pitch as practice finished and the press were let out to the field. Yesterday Valeri was held out of practice by the team to recover from some soreness that he has been experiencing for the last two games. Caleb Porter told the press yesterday that Valeri is expected to be available for this weekend's match against DC.

Pa Modou Kah was not spotted at today's training session. Kah also missed practice yesterday with a tight hamstring. Porter said that he expects Kah to be available this weekend, but that Rauwshan McKenzie was available if he was not ready to return. If Kah is available then McKenzie will likely go back out on loan.

Frederic Piquionne continued his absence from training today due to a family emergency that has kept him in Martinique for the last week and a half.

Rodney Wallace was among the group of players kicking a ball around after practice today. Wallace has been making a marked improvement in his training over the last several weeks as he returns from offseason ACL surgery.

After practice wrapped up, Wallace and Will Johnson took turns trying to chip balls over the fence that surrounds the practice pitch to hit Futty Danso and Donovan Ricketts as they walked inside. Although both came close, neither could quite pick out their targets, even when Futty stood still to give Johnson one last try.

Kalif Alhassan, Aaron Long, Schillo Tshuma, and Wallace were still out on the pitch juggling a ball back and forth for quite a while after practice was over.

Jamie Goldberg alluded to it yesterday, but today we got to see Alvas Powell's hair up close. It is a pretty wild pattern that he has braided in. 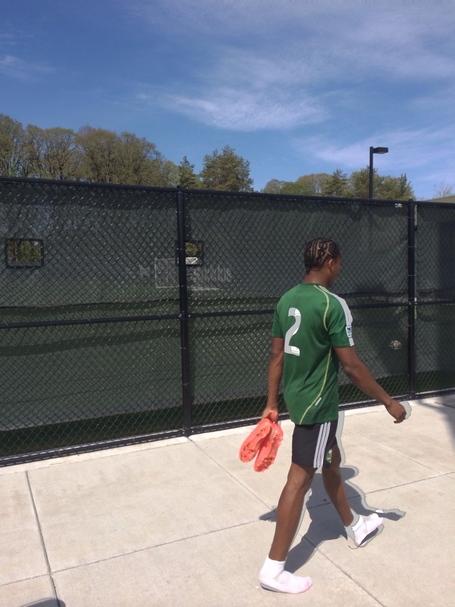