It was the final training session for the Timbers today before they face the LA Galaxy tomorrow.

The Portland Timbers held their usual closed practice session at Providence Park before they face off against the LA Galaxy tomorrow, in the second match of their three game home stand.

Caleb Porter talked about previous success against the LA Galaxy at home and how they prepared for their first game against them tomorrow.

Well, playing at home helps. So you know last year we got 'em twice at home and then we drew them on the road as well. We had a lot of the ball, on the road especially, and that's a key against LA. They are a team that wants the ball, they want to push the game. They've got very talented players. If you give them the time and space to play and you let them have the ball they can open you up. The real balance with playing LA is the more you press the game the more they can hit you on the counter attack. And they are actually probably better playing on the break than they are having the ball and controlling games. We are gonna come out aggressive like we always do. We've worked all week on managing the movement of Keane and Donovan. Certainly those guys you have to be aware of.

Caleb also mentioned the lightheartedness after practice before the big game and how that plays into the group's confidence and belief.

Yeah, and honestly they've been like that for the last month. Well really the whole year. So again I think that says a lot about the belief we have. We weren't getting results. The guys know we are a good team. They know we are capable of turning this around. We know we are capable of winning games. We need to focus on the next game and get three points, thats it. The guys are maybe a little less tight, I think that just happens, even though they've never been down and the spirit has never been bad when you get that weight lifted and you finally break through I think that definitely lightens the load on their shoulders. And I think we will have a very good game tomorrow. I'm very confident we're going to have a great game and play well like we have been but hopefully take it to another level.

Caleb was asked how important it was to keep Donovan from scoring goal number 135 before he heads off to World Cup training camp.

No we're not thinking about that at all. We're thinking about the fact that he is a good player. I said nothing to the guys about him scoring his 135th goal. In fact I didn't even know how many goals he had. But we talked about how he is a good player. We have to be aware of him. Keane and Donovan are guys you have to be aware of. We're not going to change what we do, but with their movement and the freedom they are given, basically float wherever they want to go and they are very good at freelancing and playing off each other and very intelligent. You gotta be aware. It doesn't matter where they start because they'll float all around the park. We need to be aware of where they are and you do that with collective organization but also wherever they go, whoever is the first defender needs to be very tight and aggressive in stepping to these guys. So sometimes you can worry about your organization collectively so much that you don't get tight to them enough. And so we focused on making sure we pick these guys up. And we're aggressive and we're tight. The worst thing you can do is give these guys time and space to play.

Finally, Caleb was asked how important it was to start stringing together the wins.

It's important to get some momentum. We got 3 points on our belts but you know we gotta get the next three points plain and simple. So we're focused on doing the same thing we did last week which was coming into this game really being aggressive to try to get those three points. It is important, like its always important.

Will Johnson came out and reinforced how crucial three points are.

Very, very important. Any time you start the season with four draws at home that puts more emphasis on having to win these home games. These next two, starting tomorrow, are very, very big games for us.

He also commented on the mood of the team right now going into tomorrow's match and how they feel confident they will perform well.

Yes, we do. You know, we still know we are not where we need to be. We are still digging our way out of a hole. But we also feel we are more than capable of doing that. I think that is where you see the lightheartedness and the guys ready to continue to try to get three points at home.

Will Johnson also talked about the team's past success against the LA Galaxy and how the team steps up in big games.

Yeah, I think we're always up for the big games. You saw it against Seattle, I thought we played really well for moments of that game. I think we like the big games, the crowd gets into it more and the western conference games are so tight. I don't know about the prior success helping us out at all. That can go one of two ways, it can be a very motivated team coming in here. But like I say to you guys every week its massively important to get three points on our home field. And thats the expectation every time we take the field here. There's no other way to say it.

Diego Valeri and Steve Zakuani were indoors by the time the press were allowed onto the field.

Michael Harrington was on his way indoors but did appear to have participated in full training.

Rodney Wallace was running the full length of the pitch interspersed with long sprints while under observation from one of the trainers.

During the Q&A Caleb Porter stated that both Harrington and Zakuani were out practicing today, though no details on their level of involvement were given.

When the press was let out onto the field the reserves were finishing up a short 5-on-5 scrimmage while the starters were stretching and cooling down. Kalif Alhassan was stretching with the starters group. Kah also gave Futty a piggyback ride towards the locker room while dribbling and juggling a ball. Afterwards Kah took a few PK shots against Justin Luthy. And right before the Q&A, Caleb Porter stepped up and took a few PK shots on Justin Luthy too. 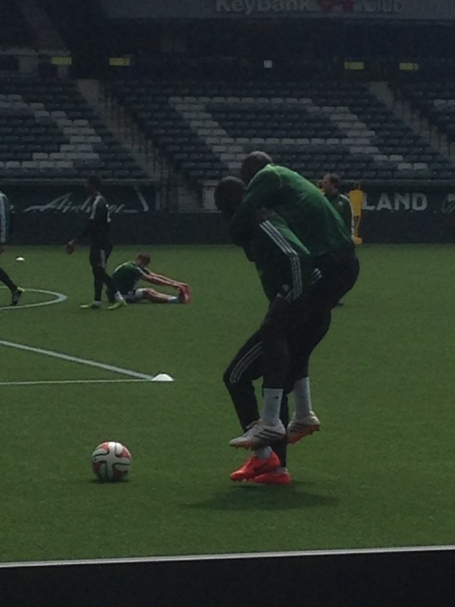