The 50th Anniversary of the Death of the Delta Dome

May 15, 1964 was the date of the proposed stadium's failure on the ballot.

Share All sharing options for: The 50th Anniversary of the Death of the Delta Dome

Fifty years ago today, Portland voters rejected a $25 million bond measure that would have funded the so-called Delta Dome. The dome, which would have been constructed on the west side of Interstate 5, was envisioned as the great sporting venue of the Pacific Northwest a dozen years before Seattle's King Dome opened. Though funding was never approved and the stadium never built, the stadium idea had a winding and interesting history in the early 1960s.

The confluence of events that led to the dome proposal can be traced all the way back to 1926 and the construction of Multnomah Stadium. When the Portland Beavers baseball team moved out of Vaughn Street Park in 1956, the city was down to a single stadium. Portland voters approved an indoor arena proposal in 1954, funding what became Memorial Coliseum in 1960. Late in the 1950s, the unprecedented moves of the Brooklyn Dodgers to Los Angeles and New York Giants to San Francisco put the west coast in play for major professional sports.

With rumblings of a potential domed stadium in either Kent or Seattle as early as 1959, Portland business and civic leaders joined forces in 1961 to sanction a feasibility study for a massive recreation complex in North Portland. The plans, unveiled August 1, 1962, included the construction of a golf course, an auto racing track, botanical gardens and a 40,000-seat covered stadium as part of the $48 million proposal. At the time, a covered stadium still usually referred to one in which all of the seats were covered while the playing surface was open to the elements. Only when Houston's Astrodome was first publicized in the early 1960s did the nomenclature shift.

Despite a good, well researched plan in place and both city and county governments funding area park enhancements and construction at the time, the businessmen behind the recreation plan suddenly shifted the project's aim. With Seattle hosting the World's Fair in the summer of 1962, Portland leaders wanted something bigger and more noteworthy than just one of the country's largest recreation areas. On September 4, Mayor Terry Schrunk and representatives from Portland Metropolitan Future Unlimited, the consortium of businessmen funding the park study, announced at a press conference that Portland would be bidding to host the 1968 Summer Olympics.

The timeline was short with the US Olympic Committee set to make its choice for the American bid in mid-October of the same year. A presentation was quickly developed to introduce Portland to the USOC in the boldest, most colorful fashion possible. At the heart of the bid's location was the as yet unresolved Delta Park recreation area and Metropolitan Future used its prior research to anchor the Olympic Village and athletics facilities to the plans first announced in August. While the original proposal was heavy on facts and figures, the Olympic presentation was designed to blow the site selection committee away in a bit of a smash-and-grab. 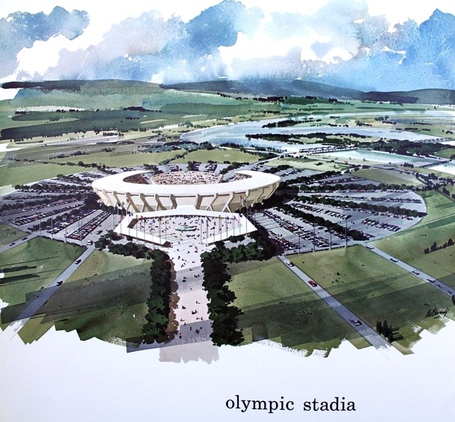 Six weeks after the initial Olympic announcement, Portland representatives traveled to Chicago to try to convince the USOC of Portland's viability. The stadium was the key to the proposal, in terms of a lasting impact for the city, but the watercolor renderings of the Delta Park area were unlike anything USOC officials had ever seen. Despite lacking the institutional infrastructure of more powerful bids from Detroit and Los Angeles, Portland's presentation was so impressive that the committee required an extra, emergency session before making its final determination.

Yet however beautiful the images of the proposed Olympic site, Portland could not overcome the longstanding bids and familiarity of Detroit and Los Angeles. The Motor City was selected, and though a controversial re-bidding occurred in March 1963, the dream of hosting the XIX Olympiad was dead for Portland. The Oregonian's business editor, Gerry Pratt described the Rose City's, writing on October 17:

"The reason was obvious enough to those close to the strategy it takes to capture a US Olympics nomination: Portland had not had the time for the delicate, person-to-person political work needed to swing a national committee like this to a town in the West...The mayor, who had pitched hard and long in this Chicago campaign, perhaps the toughest political wrestle of his career, said immediately on receiving the news: ‘We certainly haven't come here for nothing. We fought hard and Portland moved into the big league on our fight.'"

The big leagues were exactly where Portland was headed next, as Metropolitan Future tried to use the positive press and several months of planning to transition a recreation area and Olympic bid into the country's largest domed stadium. With major professional sports in Los Angeles and the Bay Area in baseball (Dodgers, Giants and Los Angeles Angels), basketball (Los Angeles Lakers and San Francisco Warriors) and football (San Francisco 49ers and Los Angeles Rams in the NFL and San Diego Chargers and Oakland Raiders in the AFL) by early 1964, the Pacific Northwest had become a viable option for further westward expansion.

Rumors have long persisted that the AFL's Oakland Raiders were interested in moving to Portland, but the more likely outcome in 1964 was actually the potential relocation of the Kansas City Athletics. Yet Portland's problem was the classic chicken-and-egg scenario that baseball was trying to avoid by the mid-1960s. If the Rose City had a stadium, it could attract a professional team. If the Rose City had a professional team, it could justify building a stadium to house it. But without either, baseball in particular was wary of expanding to the Northwest.

To remedy the situation, the newly formed Delta Park Recreation Commission adjusted Metropolitan Future's original plans to extract the stadium and present it independently. The commission contracted architecture firm Skidmore, Owings and Merrill to design a domed stadium that would rival the in-process Houston Astrodome. The firm, which had designed Memorial Coliseum several years prior, and later designed such famous structures as the Hancock Center and Sears Tower in Chicago, the H.H.H. Metrodome in Minneapolis and the Lyndon Johnson Presidential Library, drew up plans for the multipurpose facility planned for North Portland. Featuring rotating stands to provide either an outfield wall for baseball or up-close viewing for football, the dome would hold a baseline of 46,000 and could have temporary seating added to reach a capacity of 80,000.

The site for the dome was the same as had been determined in the recreation area and Olympic plans, just west of the impending freeway that would connect Oregon and Washington across the Columbia River. As the high ground in a swampy area that had been destroyed in the infamous Vanport flood of 1948, the stadium site would be surrounded by seventeen thousand parking spaces. A wooden dome would be capped by a plexiglass top in order to allow natural light into the structure and could even be opened for additional ventilation.

With a massive stadium, almost endless parking and Eisenhower's Interstate Highway system all in place to facilitate the ease of arrival and departure in an otherwise empty area of the city, Portland seemed to have a perfect plan for attracting professional sports. All that was required was the passing of a $25 million bond, which was expected to be repaid over twenty-five years through ticket sales and a per household tax increase.

However, when city voters went to the polls on May 15, 1964, citizens were persuaded otherwise. The hastily written Measure 2, which allowed supporters fewer than two months to promote in the press and to voters across the city, faced questions about increased traffic, the reality of drawing a professional team (Memorial Coliseum sat almost empty until the Portland Trail Blazers arrived in 1970) and the likelihood of resulting increased taxes. Opposition repeated these questions, citing previous infrastructure investment a decade prior as examples of the 'right' kind of investment. Fanciful notions of professional sports at the expense of the tax payer for a generation were sold as reasons to reject the dome measure.

When the votes were tallied, the Delta Dome had failed with 91,961 votes for and 101,324 against. Later, the dome was pushed back onto the ballot for the November election cycle with Multnomah County voters responsible for an even greater defeat than city residents had provided in May. Two years later the city purchased Multnomah Stadium from the Multnomah Athletic Club, eliminating the possibility of the construction of a replacement stadium outside of downtown.

Today the Portland Expo Center sits on the proposed stadium site just south of the Columbia River. While a golf course and auto racing circuit were eventually constructed, as was a smaller sports facility featuring soccer and baseball fields, the dream of the country's largest recreation area never came to fruition. An unsuccessful attempt at attracting the 1972 Summer Olympics followed but eventually Portland moved past its short-lived infatuation with constructing, at tax-payer expense, a domed stadium.

Fifty years later, Seattle has long surpassed Portland as the sporting capital of the Pacific Northwest with both NFL and Major League Baseball clubs anchoring first the King Dome and now the waterfront area just south of downtown. Could that relationship have been flipped if five thousand Portlanders had a different opinion in May 1964? The answer can never be known but it does seem likely that such a facility would have been attractive to the expansion-minded offices of professional football and baseball leagues.

Of course that would almost certainly have led to the demolition of what we now know as Providence Park. Now nearly ninety years old, the stadium is among the oldest in American professional sports and a point of pride in downtown Portland. Would a dome on the edge of town have survived even fifty years? That too is unlikely, given the lifespan of other stadiums built in the same era, including the King Dome.

These days, the Delta Dome is referenced every few years without much context. That makes sense, considering the stadium was never constructed, but it's place in Portland's sporting history is more significant than is often remembered. So today, fifty years to the day since the dome met its death, let's think about what might have been.