The Timbers introduced their new striker at practice today.

The Portland Timbers had their final practice of the week at Providence Park as they prepare to host the Columbus Crew tomorrow in the team's third straight home game. With practice closed until the majority of the team had left the pitch, there may not be many updates available on the Timbers' recent injuries, but that was offset by the introduction of the freshly arrived Fanendo Adi.

With his signing announced on Monday, Adi practiced with the team for the first time today. Caleb Porter preached caution to the press when asked about Adi's potential involvement in tomorrow's match.

"He got here yesterday around midday and obviously he flew a long time, jet-lag and all that. He got a good night's rest last night and obviously trained today so he got a little run in. We'll make a decision based on that and we will talk to him and see how he feels."

Porter also talked about the dimension that Adi adds to the team, something that the Timbers have been lacking with the absence of Frederic Piquionne leading up to his parting ways with the team.

"We know what we get with him," Porter said about the Timbers' new forward. "He is a big boy. He is big, strong, and good in the air, he can hold the ball, and that is what we wanted, what we needed, in that third option."

After a stint in the gym, Adi came out onto the press and introduced himself to the press. Despite his long day of travel to arrive in Portland, Adi told the press he was ready to go in tomorrow's match if Porter called his name. 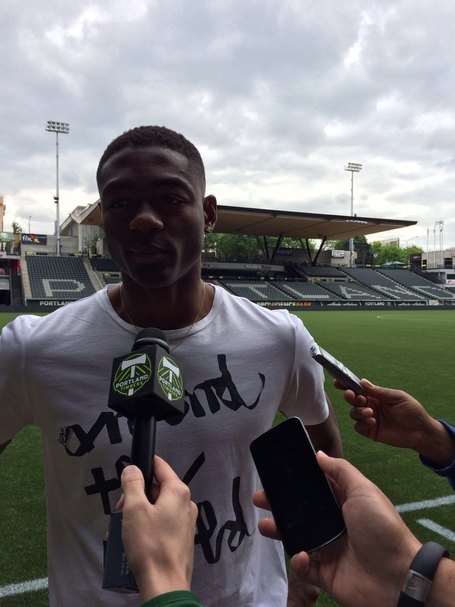 Said Adi, "I'm prepared, although I had a very long flight. We will see. That depends on the coach but I think I am good to go."

If he does get on the pitch, Adi was quick to emphasize that he can't play with the goal of impressing the coaches, he needs to just go out and enjoy the game.

"The coaches have watched my games and they should know best how I can be of maximum contribution to the team. Personally, I think I can help the team in every way that I am assigned to help the team. It is just to go out there and play my game, not trying to prove anything to anybody, but just enjoying football."

According to Adi, Porter told him much the same thing, although with more businesslike bent to it.

"We spoke and the thing is not about a personal role on the pitch, but we spoke about, as professionals, what you are here for, and what I am here for is to help the team, do my best on the pitch, and to be professional in every way."

Of course, with the Timbers' attack struggling to find the back of the net this season, particularly in comparison to last season's banner year, Adi was asked if he was someone who the Timbers could look to to put the ball in the net.

"Every striker wants to score goals," he responded.

With practice completely closed today, there was little to see on the injury front.

Rodney Wallace was stretching on the field today with the rest of the team as they slowly headed indoors for the usual post-practice gym session.

Diego Chara and Michael Harrington were both not on the pitch today. According to a team press release, Chara is expected to miss two weeks after undergoing surgery to repair a broken hand suffered against the LA Galaxy. Harrington, Porter told the press on Wednesday, will miss this weekend's match due to a rolled ankle, also suffered against LA.

Danny O'Rourke was not still on the pitch today when the press was allowed out to observe. No word on whether he is still on trial with the team.