Portland Timbers Training Quotes and Notes: Where are you going?

The Timbers got in their last day of training before taking on D.C. United tomorrow.

Share All sharing options for: Portland Timbers Training Quotes and Notes: Where are you going?

The Portland Timbers trained at Providence Park today as they finish their preparations for tomorrow's match against D.C. United. Practice was closed as the Timbers worked on their tactics for tomorrow.

Looking forward at the rebuilt D.C. side, Porter talked about the solid run of results that United have put together so far this year.

You know the individuals, but more importantly you have got to look at how the group comes together and fits together. They have been a team that, although over the last five games they have been getting results, but in reading what their coaches have been saying I don't think that they have necessarily been happy with how they are playing.

Throughout the season it has been a common refrain from Porter that the Timbers have played well, despite not getting any wins. In D.C. he sees a team with the opposite trend.

You have got us that haven't won but we are playing pretty well if you look at the games; and them, they have been on a five game unbeaten run and haven't maybe played very well. I think that can be deceiving too because they have talent, so they are capable of playing really well in this league.

Porter sees a lesson to be learned by the Timbers in D.C.'s success this year.

The bottom line is, what I think we can learn from them, is that it is about getting points. It is about getting wins. That doesn't necessarily mean that it has to look good. They have shown that. Good teams do that, find wins, and that is what D.C. has done, even though it hasn't always been with a great performance.

Pa Modou Kah was indoors by the time the press were allowed onto the pitch at practice today, but according to Porter he is "good to play." Kah missed training on Wednesday this week and was not on the pitch when the press was allowed to observe on Thursday.

Diego Valeri, who sat out Wednesday's practice after suffering from soreness in the Timbers' last two games, was on the pitch again today and confirmed after practice that he is ready play.

Rodney Wallace continued his return from offseason ACL surgery today doing a significant amount of running under the direction of one of the team's trainers after the rest of the team had headed indoors. According to Porter, Wallace's progress is "good". Wallace is expected to be back with the team soon, but the timeline for his return is indefinite, with Porter throwing out anywhere from a week to a month before he is cleared to rejoin training in full.

After practice had concluded for most of the team, Wallace, Steven Evans, Aaron Long, Schillo Tshuma, and Jorge Villafana remained on the pitch doing some additional running under the direction of the team's trainers. One by one they were allowed to go indoors until only Wallace was left on the pitch.

As Wallace ran his final sprint, the trainer shouted out to him, telling him to sprint like he was running onto a cross in the box. After running the length of the pitch, Wallace jumped in the air and mimed heading the ball into the back of the net. Celebrating his imagined goal, Wallace continued over the end line and past the advertising holdings.

"Where are you going?" the trainer called out.

Wallace, who had continued his run just past the entrance to the Timbers' locker room, pointed up toward the Timbers Army capo stand and the North End. 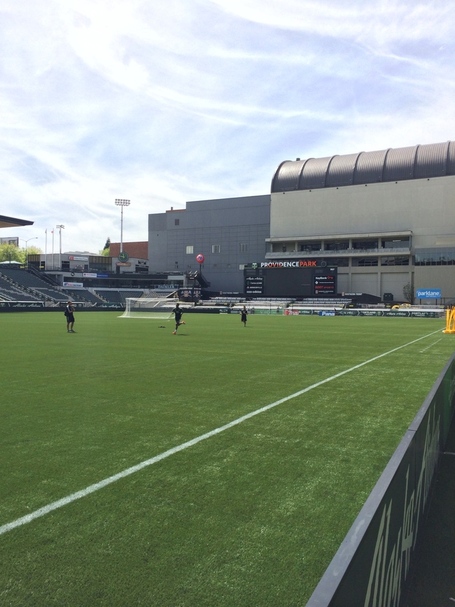 Caleb Porter and Sean McAuley took turns shooting penalties with Pablo Moreira in goal after practice had wrapped up. Porter started things off with a single step approach, putting the ball into the lower right corner of the net. Next, McAuley took a long run-up, hammering the ball high and to the left, causing Moreira to duck out of the way. 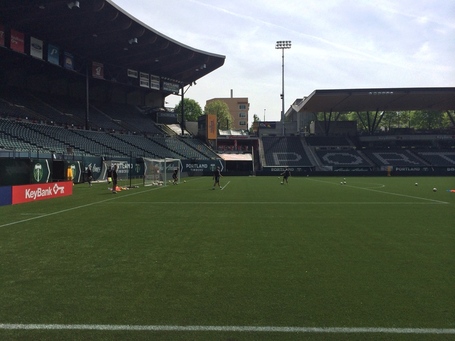