The Portland Thorns held a final training session prior to facing off with the Western New York Flash on Wednesday at Providence Park.

Share All sharing options for: Thorns Training Report: May 20, 2014

With their second meeting of the season with the Western New York Flash tomorrow evening at Providence Park, the Portland Thorns held their last training session before the match.  The session was only open to the media for the first 15 minutes, and Paul Riley, Christine Sinclair, and Emily Menges spoke with to the assembled media following the session.

The Thorns opened the training session by doing some light passing drills as a warm up, with everyone, including Alex Morgan and Rachel Van Hollebeke participating, while goalkeepers Nadine Angerer and Michelle Betos worked with goalkeeper coach Steve Reese on the far side of the pitch. 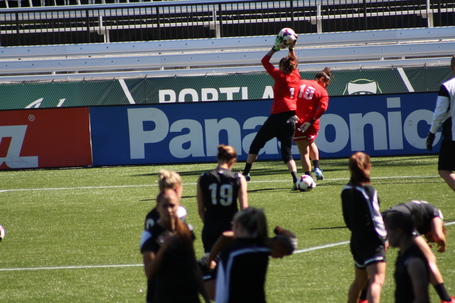 After a few minutes of warm ups, the Thorns then jogged around the field, stretching as they went, for the next several minutes, under the supervision of Thorns performance coaches 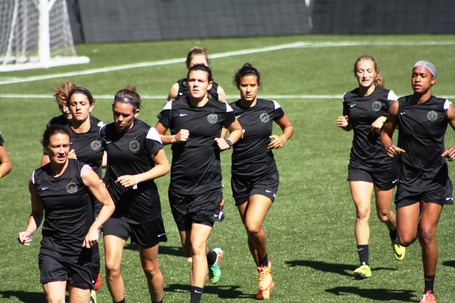 At about 10 minutes into training, Riley assembled his squad and had them set up into passing drills, which every player but Van Hollebeke participated in, as she worked with one of the coaches near the assembled members of the media. 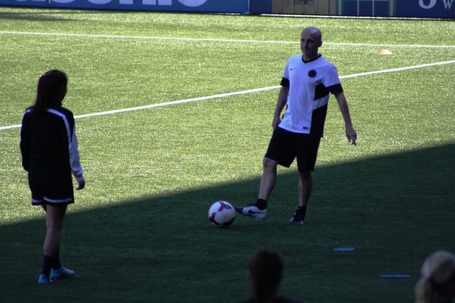 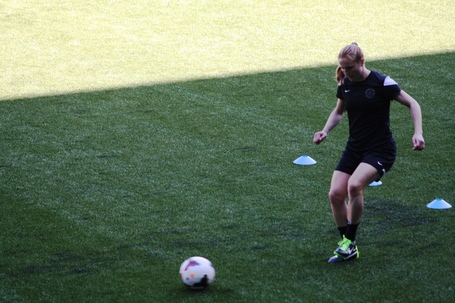 The training session was closed to the media after this point.

Riley speaks about Emily Menges finally being in training full time, Alex Morgan's return, the challenge of facing Carli Lloyd and Western New York, the arrival of Vero Boquete, the Thorns' style without all their stars, Nadine Angerer's impact on the defense and on penalty kicks, and Nikki Marshall's play and influence and her USWNT prospects.

Sinclair speaks about facing the Western New York Flash, finding her first goal, her goalless streak, doing whatever she can to help the team, the influx and impact of the incoming players, finding her chances, and the Thorns putting in a complete performance.

Menges speaks about finally being done with school, the impact of training full time, focusing solely on soccer, and the impact of playing with Nikki Marshall and Nadine Angerer,