Stumptown Breakdown: On the Benefits of a Big Tall Guy

The Timbers' newcomer used a few minutes of play to make a big impact.

Share All sharing options for: Stumptown Breakdown: On the Benefits of a Big Tall Guy

Another wild match this season, this one between the Portland Timbers and the Columbus Crew, meant there were a lot of choices for Stumptown Breakdown this week. Not for the first time this season, we're taking a look at a late goal that decided the score line.

Darlington Nagbe (who else?) earns a free kick for the Timbers in a good position when he is sandwiched between a couple of Crew players and gets his legs knocked right out from under him. Diego Valeri steps up to take the kick. 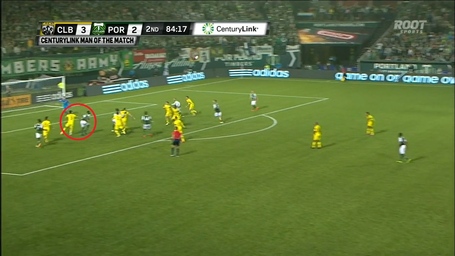 As Valeri sends in the free kick, everyone starts jockeying for position. Pa Modou Kah actually drops back toward the top of the box, probably hoping his defender will do the same. Futty Danso, in the middle of the box, has effectively become a human shield for Fanendo Adi, getting in the way of his defender and opening up the pocket of space that Adi, in the red circle, can now run into. Adi does so and puts a little space between himself and Giancarlo Gonzalez. 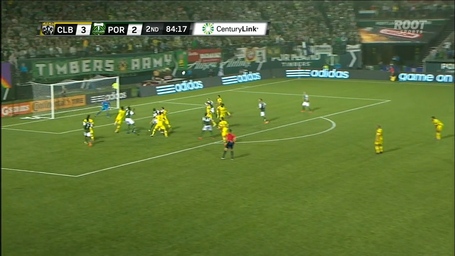 He is now in a great position to win this ball, while Gonzalez has to fight to recover his position. You can see in the frame above that while Adi is prepared to simply jump straight up in the air, Gonzalez has to try to dive in from behind him to win the header. 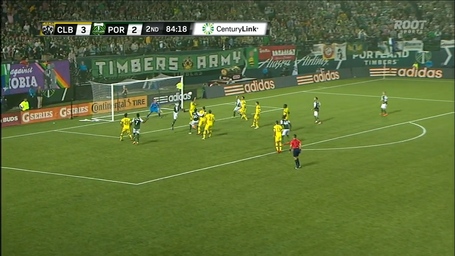 Gonzalez is unsuccessful. In the video you can see how he goes flying past Adi, unable to get a head to the ball or even block Adi's header, which the forward skillfully flicks toward the far post. He's a little far from the goal to the necessary power on his header to beat the keeper, but he's done well to put the ball down and toward the far post where a teammate might be able to tap it home. 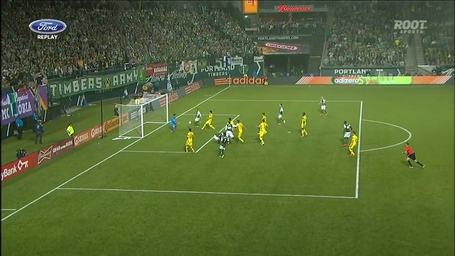 And of course there is a teammate at the far post, because Gata. In yet another moment where his reaction could appropriately be called pouncing, Gaston Fernandez sneaks in at the far post to poke the ball home. 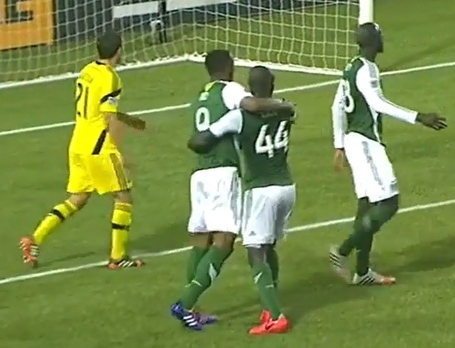 It may have been Gata's finish, but Kah knows who made that goal possible. As Valeri set up for this free kick, the guys behind me and I were pleading with him to "find the big tall guy." Those pleas turned into joyous shouts of "Big tall guy! BIG TALL GUY!," as Adi did his thing.

If Adi can actually do this consistently, he could play a bigger role between now and the end of his loan than many of us initially expected. There are other times this season, when the Timbers attack looked particularly flaccid, that having a true set piece threat would have been helpful. Even when the opposing defense is packed into the box and the Timbers can't find the final pass or the finishing touch, they do earn set pieces. A shot in deflects off one of the many players in the box and out for a corner, or Nagbe draws a foul on his way to goal and earns a free kick. The opportunities on set pieces are there.

The Timbers have been able to make the most of these chances on a few occasions this season, but so many of their corners and free kicks sail harmlessly through the box or are easily headed away by the defense. This is mostly due not, in my opinion, to bad service but to a general lack of both height and prowess in the air. The only other current Timbers player to use his height and strength to win a set piece the way Adi did is Futty, who hasn't scored a goal or earned an assist in that way since 2011. With Adi as a target on set pieces, the Timbers attack has another dimension, one that is particularly useful in those games when it just feels like nothing else is working.