Will Alex Morgan Make her First Appearance Against Sky Blue?

The Portland Thorns and United States star has been upgraded to Questionable on this weekend's injury report.

Share All sharing options for: Will Alex Morgan Make her First Appearance Against Sky Blue?

When will Alex Morgan be back?

This has been a question on Thorns and United States Women's National Team fans minds since the start of the season.

Morgan, who has been recovering from a stress reaction in her foot for the past 6 months and struggling with injuries since the end of the 2013 NWSL season, has been training with the Thorns for the past month and was a full participant in the portion of training I observed on Tuesday.

After Wednesday's match against Western New York, Thorns head coach Paul Riley indicated that Morgan could have made an appearance in the match, and her upgraded condition on the injury report seems to back this up, as does a tweet by Timbers and Thorns owner Merritt Paulson: 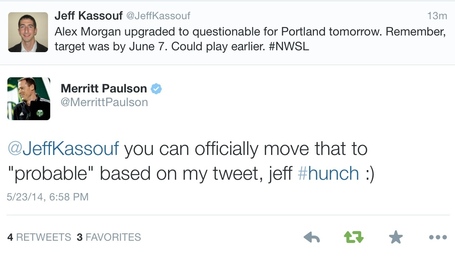 Given Merritt's tendency to "let things slip" on Twitter, I would say that there is a good chance that Morgan will at least appear for a few minutes at the end of the match.  This revelation is despite the fact that Riley said earlier in the week that she will make her first appearance, along with Vero Boquete, Stephanie Catley, and Rachel Van Hollebeke on June 7 against Western New York.

This is all speculation at this point, but if Morgan is ready to go, and it appears that she is, the Thorns would be crazy to not run her out at the end.