Stumptown Breakdown: On the Road

Take a closer look at the Timbers' gamer-winner against New York.

Share All sharing options for: Stumptown Breakdown: On the Road

The Portland Timbers' first-half against the New York Red Bulls featured some pretty dismal soccer, but a surprising equalizer just before halftime gave them some life going into the second half. They pressed New York higher, they attacked more, and finally scored a go-ahead goal and hung on for their first road win.

Today we're looking at that game-winner:

Will Johnson starts things off by finding Steve Zakuani in acres of space on the left side of the field. 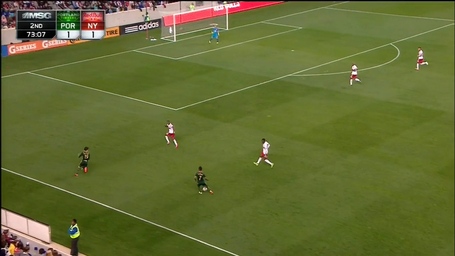 Jorge Villafaña makes the overlapping run, and Zakuani thinks about taking that option but ultimately cuts inside instead.

(Slightly off topic: it turned out fine in this instance, but Zakuani seemed to ignore that overlapping run more often than not. After seeing what happens when Villafaña finally does get the ball, I hope the winger on his side pays more attention to that run if he continues to get playing time) 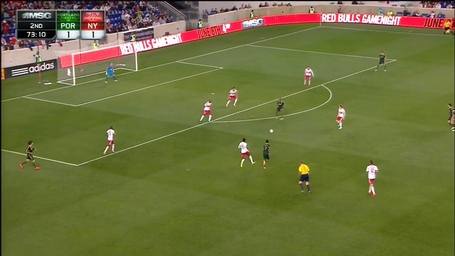 More attackers arrive as Zakuani drives into the middle and he picks out Darlington Nagbe at the top of the box. Nagbe dodges an attempt by Lloyd Sam to dispossess him as he dribbles back out toward the wing. 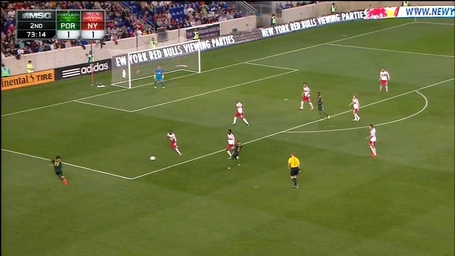 Finally, Nagbe plays the ball to Villafaña, who has come back onside and times his second run well so he receives the ball behind the defense. 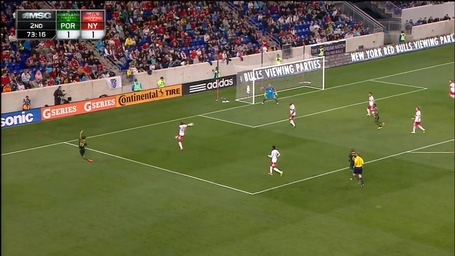 With his first touch, he sends a cross into the box. It's a pleasant departure from what seems to be the norm for the Timbers' crosses; it doesn't simply go sailing through the air where it's headed away by a center back who has no one challenging him for the ball, nor is it easily plucked out of the air by the goalkeeper. It's far enough from Luis Robles that he chooses to stay on his line, and it's low enough that our aerially-challenged attackers shouldn't even have to jump for it. 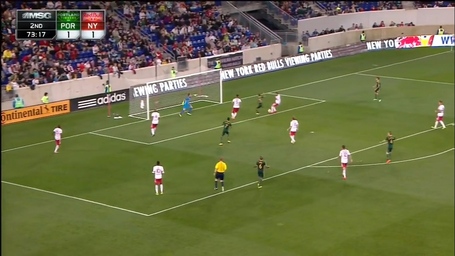 In fact, the cross is low enough that Armando gets a foot to it and tries to flick it away. The ball bounces off his hand  in the process and then into the path of Diego Valeri as he makes a run to the far post. In a happy turn of events, the Timbers appear to catch their opponent unaware and ball-watching, instead of vice versa.

Unfortunately Valeri can't quite get to the cross in time and the ball keeps on bouncing through. 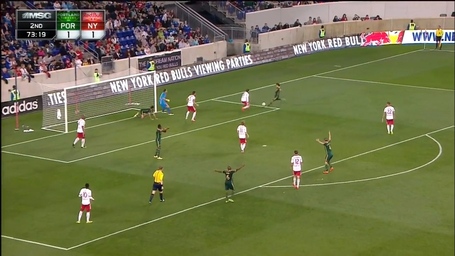 As it does, pretty much everyone in the box stops to protest the uncalled handball, except Maximiliano Urruti who--bless him--doesn't stop playing until he hears the whistle. He pulls a Gata and pounces on the loose ball before the defense can recover and slips a shot to the far post , under Robles and past Valeri, who thankfully has the presence of mind to get his arms out of the way so he doesn't block his teammate's shot.

A few things stand out about this play. First, the Timbers have scored a few goals now on crosses resembling this one--for example, the goals by both Gaston Fernandez and Urruti against D.C. United. Unless Fanendo Adi is on the field, this is the only type of cross that should be a part of the Timbers game. The outside backs in particular need to stop sending in crosses for a traditional big striker who isn't there.

This play also differs from the attacking strategy that the Timbers were relying heavily on in the first half. The boys in green seemingly wanted to pass the ball into the box and walk it into the net, but with the exception of one deflected shot by Urruti, New York found it easy to thwart their attempts. With Villafaña providing the width and receiving the ball behind the defense to cross it in, rather than attempting to pass the ball through the traffic at the top of the box, the Timbers found a better way to get the ball into a dangerous area.

Lastly, it has to be said that Urruti is on a tear right now. He has four goals in four appearances, only one of which was anything close to a full game. The twofold challenge for Urruti and for the Timbers now is how to keep his scoring streak going, but also how to get some other guys on the scoresheet. One of the strengths of the attack last year was how many genuine scoring threats the Timbers had. Unless Fernandez and Urruti can really light things up and score 15-20 goals a piece, the Timbers are going to need a little more help from guys like Zakuani and Nagbe, who have yet to open their 2014 accounts.