The Timbers' attack appeared to be getting back on track in Saturday's victory over D.C. United.

The Portland Timbers got three excellent goals in their win over D.C. United, getting back to some of their attacking strengths and overcoming some of the issues they have had on offense this season.

It was hard to choose this week, but finally it was hard in good way. The first goal may have technically been the best, but I want to look at how the Timbers got that final goal that the needed so badly. Here is the game-winner:

As we all know, the play starts with a corner kick. Not one of Diego Valeri's best kicks of the night, it is cleared by one of the first defenders. The ball gets only as far as Darlington Nagbe, who drops it back to Diego Chara, the only  player who was held back a little on this corner. He was probably there as much to do what happened next as to defend a potential breakaway. 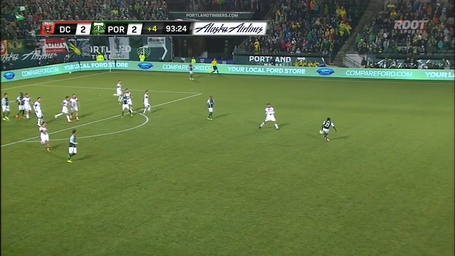 For a moment it looks like Chara is going to boot it back into the box and let his teammates battle for it in the air. That seems to be what Luis Silva is expecting too; he looks ready to jump in and block the ball, but at the last second, Chara plays it out to Valeri on the sideline instead.

This is probably the best possible decision he could make. I don't like the Timbers' chances either fighting for that ball in the air or trying to work it through the crowded middle. By playing it out to the side, the Timbers pull a defender out wide as well and the offense now has a little time to make their runs and find themselves some space. 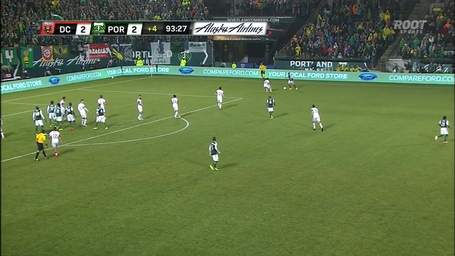 Valeri steps up to meet the pass that Chris Rolfe might have otherwise been able pick off. It's a little thing, but one of those basics they Timbers have seemingly overlooked recently. When they just stand and wait for the ball to reach them, it often doesn't get there at all. 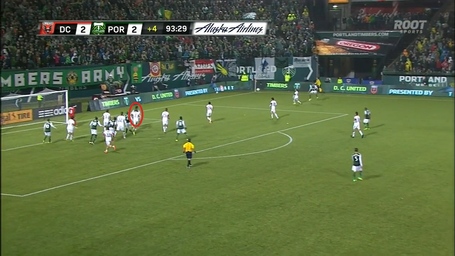 As Valeri tries to find enough space to put a good cross in, Maximiliano Urruti (blocked from view by Jeff Parke in the frame above, but highlighted by the red oval) makes a run from the middle of the box over to the near post. He gets the upper hand on the defense in terms of positioning as he makes the run, because now no one is is between him and the ball and he still has an angle on goal, albeit an extremely tight angle.

There's other good runs happening in the box as well. After the initial corner, D.C. started to clear their box and the Timbers had to go with them or be caught offside. As Valeri gets the ball on the sideline though, Gaston Fernandez runs back into the box for the far post and Will Johnson makes a pretty sneaky run into the space just vacated by Urruti. At times this season, the Timbers have simply made themselves far to easy to mark. Not this time. 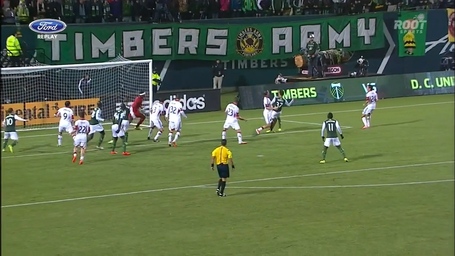 Valeri plays a low cross into Urruti--again, a change for the Timbers who have often resorted to high crosses that sail over their attackers when they've been forced out to the side this season. Urruti's first shot is a little awkward, possibly off either his knee or his thigh and bounces back off the post. (They call it a save on TV, but in a replay they showed after the game, from the opposite side of the field, it does not appear that Bill Hamid gets a hand to this one.) 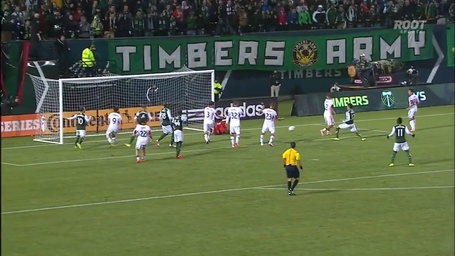 Urruti steps back after his shot, and as his shot ricochets off the woodwork, it comes right back to him. He still as, as you can see above, an almost impossibly small bit of net to aim for. Hamid may be down, but he's still there at the near post and potentially capable of pulling off an incredible save on the second try. Also in the area are Cristian, Bobby Boswell, and Perry Kitchen, possible in a position to block a shot.

As the ball bounces back to Urruti, he hits it cleanly this time, and he finds that little gap he's aiming for 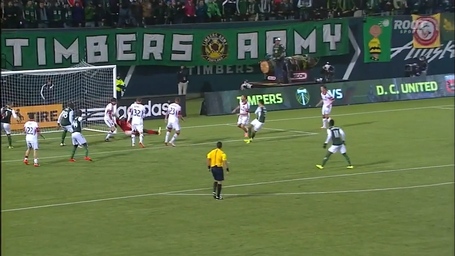 You can see in this frame though just how perfect the shot needed to be. The white blur by Hamid's hip is the ball as it slips into what seems to be mere inches of space between Hamid and Cristian. Fortunately, in this moment where the Timbers so desperately needed it to be perfect, it was.

Give so much credit to the Timbers late in this game for keeping their wits about them and not showing their desperation even though, let's face it, they desperately needed this. Too often teams in their position fight for a goal with such frantic energy that they they seemingly forget everything they know about how to actually score a goal. They try to bypass all the build up and hard work because they know they're short on time. They lump the ball forward and hope for the best, send sloppy crosses into the box to no one, and generally resort to trying to ram the ball down their opponent's throat. This often doesn't work.

The Timbers mostly kept their cool though, even with the clock ticking down. Donovan Ricketts actually throws the ball out to Valeri instead of booting it long. The Timbers work it up the sideline, earn a throw-in, work it forward a little more, earn a corner. And when that initial corner is cleared, neither Chara nor Valeri sends it carelessly back into the melee. Chara finds the wide open Valeri who picks out Urruti making that run to the near post. It's not that they're playing the prettiest soccer through all of this, but they're looking for teammate, trying to pick good passes, not just kicking and hoping for the best.

Aside from being able to play with determination instead of desperation at the end, the Timbers found success in this game by improving their off-the-ball movement and really using the width of the field. You see both those factors at play on this goal, and in the first as well. Just for fun, let's watch that too.

Here, the Timbers rely on one of their 2013 strengths; high pressure. Right from kick off, they are all over D.C., forcing slopping passing and long balls. Nagbe finally gets the dispossession here and he and Valeri build a great attack up the wing. Meanwhile Fernandez makes the sort of run that the Timbers themselves have been fooled by this season, just jogging casually up the field, lulling the defender to sleep, then turning on the jets to get away from him. Then awesomeness ensues.

The Timbers still need to fix some defensive issues and stop letting set pieces bounce around their box, but the attack on Saturday looked as close to it's 2013 heights as it has all season. Hopefully they have a stronger foundation to build on now and can get some wins that are not quite so stressful.