Share All sharing options for: UPDATED: Thorns Training Report: May 9, 2014

The Portland Thorns held a final training session prior to their meeting with Seattle Reign FC.

The training session, held at Providence Park, opened with the team doing brief jogging exercises and stretching before huddling as a team for a few minutes with head coach Paul Riley giving instructions for the session. 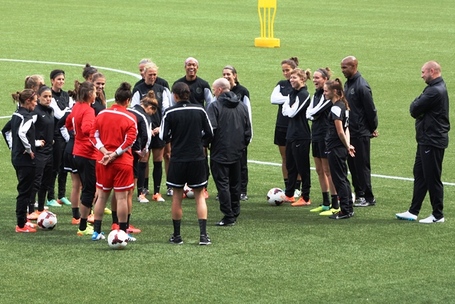 After the team huddle the team resumed jogging for a brief time before splitting off into two and threes, working on passing amongst each other, with some players work on short passes, while others work on medium-distance passes, and goalkeepers Nadine Angerer and Michele Betos worked with goalkeeper coach Steve Reese on the far side of the pitch.

Alex Morgan participated in training.  Morgan worked on short passes with Mana Shim and another teammate. 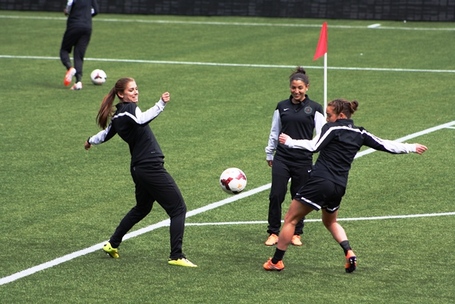 Sinead Farrelly jogged alongside her teammate to begin training, before joining her teammates in passing drills.  She is listed as probable with a left quadriceps contusion on today's injury report.

Rachel Van Hollebeke had only arrived from the locker room when training was closed to the media after the first 15 minutes, speaking with trainers on the sideline, but not taking the pitch during the time I observed.

Christine Sinclair also participated in training following Canada's 1-1 draw with the United States last night, flying back from Winnipeg, as did Allie Long and Nikki Marshall.