Share All sharing options for: Stumptown Breakdown: Recipe for Success

In the last Stumptown Breakdown I looked at Jorge Villafaña receiving a pass from Darlington Nagbe and getting behind the defense where he had a better angle to send a low ball across the face of goal for his attackers to run onto. It was a play that I felt should become a key component of the Timbers attacking strategy.

On Wednesday against Chivas USA, it certainly looked like the Timbers had reached a similar conclusion. The biggest difference between their first goal against Chivas and the game-winner against the New York Red Bulls was who finished it off. In many other respects the plays were very similar.

This isn't the goal I want to focus on this week, but let's quickly take a look at it:

Fanendo Adi capitalizes on a beautiful ball from Villafaña that bends away from the Chivas defenders and back toward the striker. Bobby Burling helps him out too with a little bit of lackluster defending; he could probably cut out the cross if he was little more alert, though he may risk putting it in his own net. Mediocre defending aside, the pass from Villafaña is truly exceptional and Adi makes a good run and finishes with composure.

I already discussed many of the strengths of this particular type of play earlier in the week, but I didn't previously appreciate the fact that any of our forwards could finish this play. It's sort of one-size-fits-all, and if the other outside backs can master the Jorge Villafaña pass, it plays to the forwards' strengths. The second goal, the one I would like to look at in greater detail, also fits both those criteria.

Villafaña may not have had the last pass on this on, but he's there again, passing the ball up the sideline to Adi. 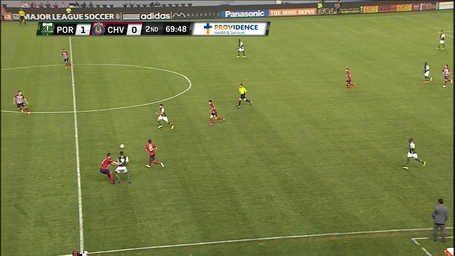 Under pressure Adi plays a quick pass to Diego Valeri in the middle. (It's always nice to see the goalscorer involved in the build-up play as well.) 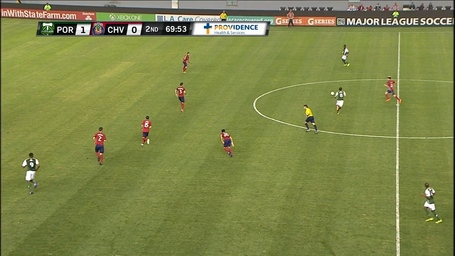 Two Chivas players quickly collapse on Valeri, so he dribbles out of trouble and uses Kalif Alhassan as an outlet. The defense drops off almost immediate, so Alhassan makes a one-touch pass back to him. 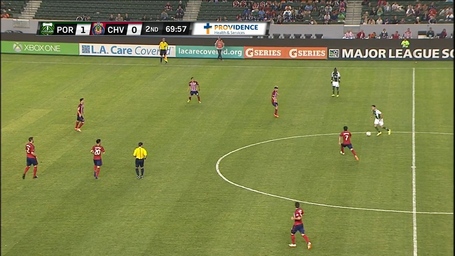 As soon as Valeri gets the ball back, he picks his head up looking for Adi. It's hard to say for sure given the camera angle available (where's the blimp shot when you need it?) but it seems that Adi may be in an offside position at first. Valeri holds on to the ball for another second and then you see Adi reappear in the frame as he circles around Eric Avila. 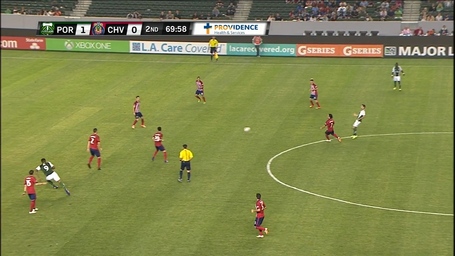 Only then does Valeri pass the ball. All the usual disclaimers about Chivas being Chivas must be made here, because the entire back line is ball-watching, even Avila who is facing Adi. Nonetheless, the pass is glorious and the run is sneaky and timed to perfection. 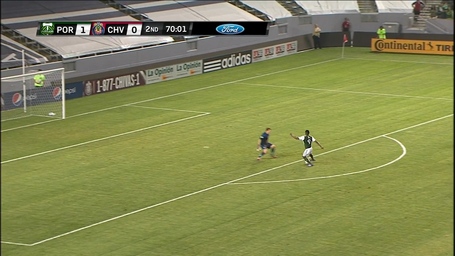 Adi is all alone with Dan Kennedy now, but he doesn't rush the 1-v-1. He waits and forces Kennedy to commit, then taps the ball just out of his reach. 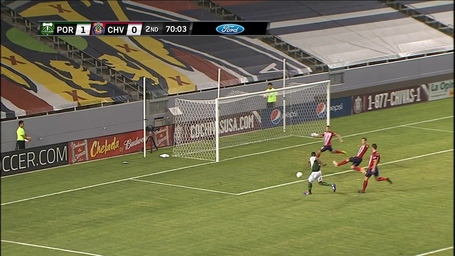 Now here it seemed like maybe Adi wasn't rushing it enough and he definitely gets a little lucky, as it looks like his shot actually goes between Burling's legs. Fortunately, in wonderful contrast to so many other Timbers games this season, luck seems to be on the side of the team in green, and Adi's shot slips through.

As with the first goal, all of the Timbers forwards probably have the skill set to make that run and finish a 1v1 like that, as do guys like Nagbe and maybe Steve Zakuani

Now I know that soccer doesn't always go according to plan and that sometimes a defender would put that cross from Villafaña out for corner or cut out the through-ball from Valeri. But if the Timbers can execute plays like this (and maybe work on looking for Adi and Futty Danso on the odd set piece) then I think they're writing a pretty decent recipe for success. After so many zero- and one-goal games, the Timbers finally don't look like they're forcing it on offense. They have a huge opportunity to climb above the red line in the standings and to do that, they should probably look to what has been serving them well on this very successful road trip.