The Timbers grabbed a lead over Real Salt Lake just before the half-time break.

Share All sharing options for: Stumptown Breakdown: Portland Timbers Take the Lead on a Classic Counterattack

It probably should not be surprising that as the Portland Timbers score more goals, they also seem to be finding more varied ways to score them. Early in the season the attack seemed static and one-dimensional, but lately we've seen goals from low crosses, goals from high crosses, set piece goals and, this weekend against Real Salt Lake, an excellent counter-attack goal.

Let's take a look at the goal the put the Timbers in front:

Darlington Nagbe puts an end to a sustained period of pressure from Real Salt Lake that included a free kick,  two corners, and a shot that forced Donovan Ricketts into a SOTW-nominated stop. 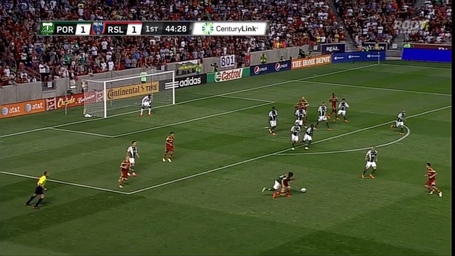 Nagbe, showing off his defensive chops yet again, steps up to pressure Ned Grabavoy just outside the box. He forces Grabavoy back and as the two of them jostle for the ball, Nagbe manages to poke it away to Will Johnson. 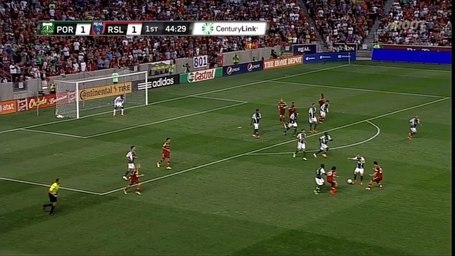 Johnson collects the ball and dribbles out of the traffic in the middle. This also gives the attackers who were back defending the corner kick a couple extra seconds to break forward so that the captain has options in front of him. 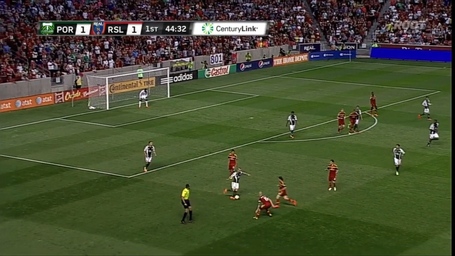 As Grabavoy rushes forward to try to dispossess Johnson and make up for losing the ball, Johnson plays a perfect pass forward to Nagbe in the midfield. 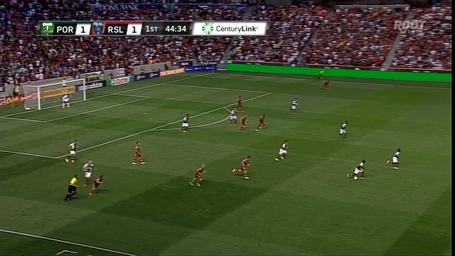 Nagbe and Diego Chara rush forward, joined by Gaston Fernandez (just out of the right side of the frame), with Fanendo Adi racing to catch up. Nagbe carries the ball for several steps, into Salt Lake's defensive half. 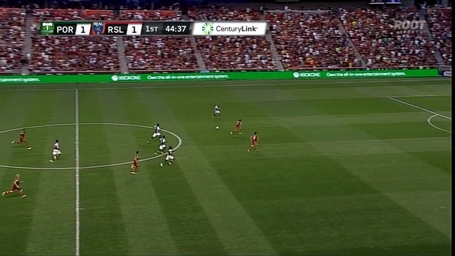 Fernandez has a bit of a head start; he's already begun his run back in the first frame. Nagbe plays it forward to him. 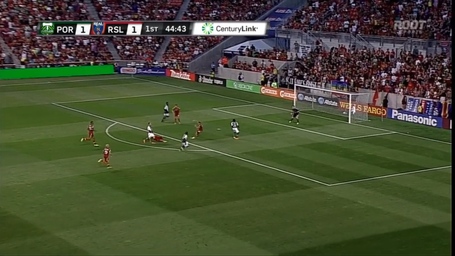 Now it's La Gata's turn to carry the ball for a little bit, while his teammates catch up. Both Chara and Adi bomb into the box, but Fernandez holds the ball until Nagbe overlaps on his right. Then he plays a nice leading pass into the box. 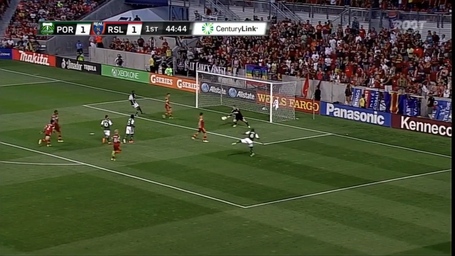 Nagbe chases it down and, with no hesitation, whips off a hard shot shot that Jeff Attinella can only swat away as he dives to make the save. The ball ricochets off Chris Wingert, then bounces in the six-yard box right in front of the net. 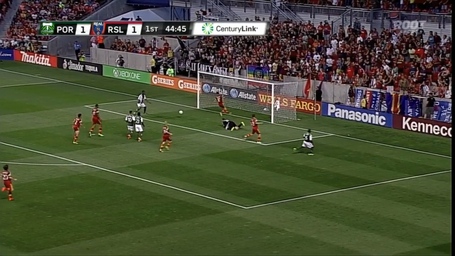 Adi is waiting for it, having held up his run when he saw that Nagbe was going to shoot. He beats everyone to the ball easily and puts his shot into the roof of the net.

As plenty of our astute commenters have noted, the Timbers have often failed to seize counter-attacking opportunities this year. Instead of going full steam ahead when they have a numbers advantage, they often slow things down, pull the ball back, and maybe pass it around the back line for a while.

Not this time. This is a textbook counterattack. It begins with a set piece, when Real Salt Lake has numbers forward and is vulnerable. When the Timbers get the ball, they take off and they have have four players on the break so that first Nagbe and then Fernandez have multiple passing options. That also means there's someone there to clean up Nagbe's rebound.

The Timbers have always had the ability and personnel to counter and they did it with some regularity last season. Perhaps all that was lacking was confidence and a bit of rhythm. The seem to have plenty of both now, and they just need to keep it up.