The Thorns held their first training in the run-up to the match against Western New York with a couple of new faces and a surprise guest.

The Portland Thorns trained for the first time in nearly a week, taking the weekend off after playing 3 games in 8 days last week.

The Thorns had their full complement of players in training, with midfielder Vero Boquete and defender Stephanie Catley making their first appearance since arriving in Portland last week, with Tobin Heath the only player still unavailable to the team.

Also in training today for the Thorns was Chicago Red Stars and USWNT midfielder and Portland resident Shannon Boxx, who is training with the team as she works her way back after giving birth to her first child at the end of February.

I missed the first half hour or so of training, but when I arrive the Thorns were in a lively session  in the middle of the pitch, working on passing and moving around defenders.

After working on this for several minutes, Paul Riley gave some new instructions and had the team continuing the drill, briefly stopping as he was displeased some player's efforts (video below).

The team resumed before taking a brief water break and then splitting up into two groups: one comprised of starters and the other reserves. 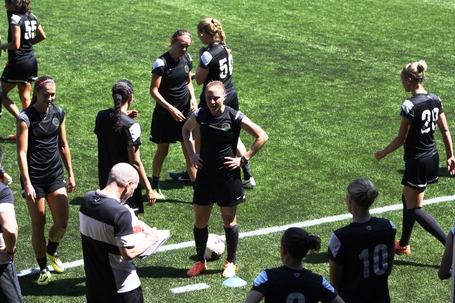 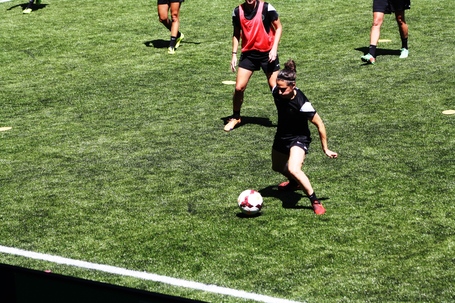 The Thorns then moved to a half-field scrimmage before closing out training with a  strength and conditioning session.

Riley talks about Chicago Red Stars midfielder Shannon Boxx's appearance in training, Boquete and Catley's first training session, first impressions of his new arrivals, Boquete, Catley, Morgan, and Van Hollebeke's availability for Saturday, "the cavalry" coming in, the match against Boston, the internal competition for spots in the line up, and the USWNT call ups.

Vero talks about arriving in Portland, her first training sessions, her role with the Thorns. the differences in play between the US and Europe, Riley's influence on her coming to Portland, and her readiness for Saturday.

Catley speaks about her first training with the Thorns, why she came to Portland, working with Riley for the first time, playing overseas for the first time, leaving Australia, her playing style, what she's heard about Portland and the fans, and being ready to start if called upon.