The Portland Thorns held their first training session prior to their final meeting of the season against Sky Blue FC on Wednesday.

The team was slightly late-arriving to training, but got right to work warming up once they were out, working mostly individually, but a couple small groups of players worked together pass the ball among themselves, with Alex Morgan moving around various parts of the pitch and passing the ball to herself against a wall. 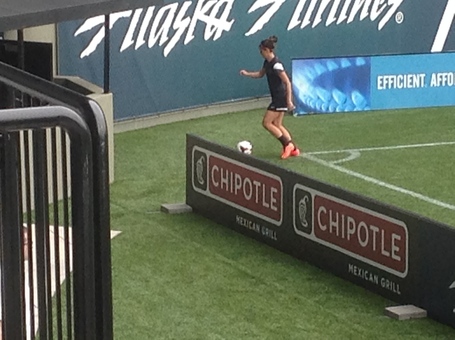 Riley spoke to the team briefly.

They then moved to more formal stretching and warm up activities, under the supervision of strength and conditioning coach Mike Demakis, who had them do various stretches as they went up and down the halfway live.

The only player not participating fully in this activity was Kat Tarr, who separated from the group about halfway through, and worked by herself alongside a trainer, doing light dribbling in a small square for the remainder of the session that was open to the media. 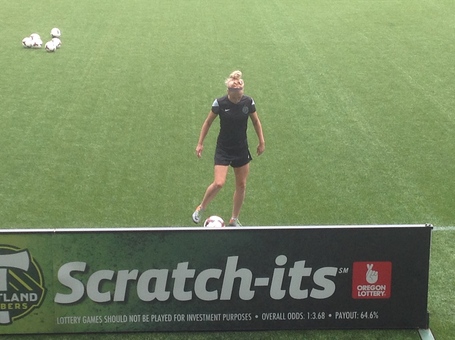 The team then took a brief break to grab water and Riley then had the team split up into pairs and work on controlling the ball off a bounce, except for Tarr, who continued to work by herself, and the goalkeepers, who went with Dumakis to continue warming up separately. 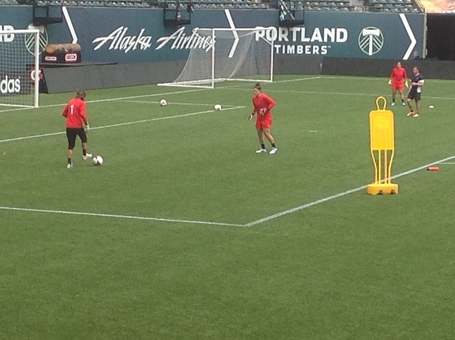 The training session was closed to the media shortly thereafter.

When trainning was reopened, most of the team was still out working with coaches.  Several players were on the far side of the field running sprints, while Nadine Angerer and Michelle Betos were working in goal while Stephanie Catley and Courtney Niemiec sent deep crosses into the box.

Tobin Heath was only absence from Thorns training, but will arrive next week.

Kat Tarr made her first appearance in training observable by the media since she had a knee procedure performed a few weeks ago.

Rachel Van Hollebeke is back to 100%, Riley said following training.