Stumptown Breakdown: Defending (or Not) as a Team

The Timbers fell apart on defense right before halftime and let the game get away from them.

Share All sharing options for: Stumptown Breakdown: Defending (or Not) as a Team

Things were already pretty bad for the Portland Timbers as they headed into first half stoppage time on Sunday. An early lead had been wiped away by a Vancouver Whitecaps penalty and a second penalty had put Canadians on top. With as many chances as the Timbers were getting though, it still seemed like something they could bounce back from.

And then this happened:

The Timbers had majority of the possession in the first half and were probably getting better chances on goal. Vancouver had more shots, but nearly all were off target or blocked and coming from well outside the box. On the other hand, just before this, the Timbers, Diego Valeri sent a shot just a hair wide of Vancouver's goal. As I said, it really looked like the Timbers could salvage this game.

This play unfolds after Vancouver has finally sustained a little spell of possession, giving the defense a break from the Timbers' pressure. 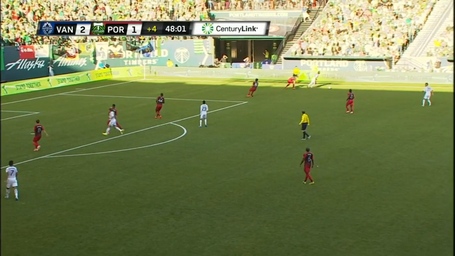 On the far side of the field, Nigel Reo-Coker and Matias Laba work the ball up along the sideline. Reo-Coker drives up the sideline, then pulls the ball back away from Will Johnson and plays it back in to Pedro Morales, who makes a quick, short pass to Laba. 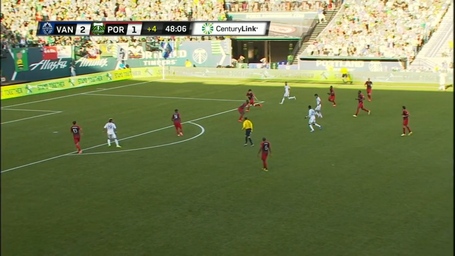 Now Laba has the ball with an option on either side of him and not much pressure from the Timbers. Steve Zakuani gives a very halfhearted chase, but since the Timbers back line doesn't want to get pulled out of position, they need the midfielders closest to the play to press a little more make sure Laba doesn't have so much time and space to make a decision. 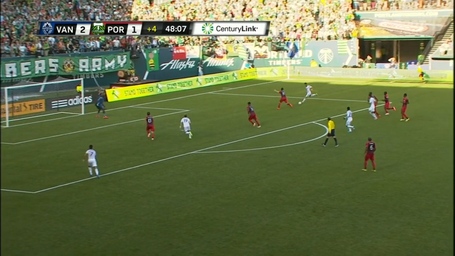 Laba plays the ball back out to Pedro Morales on the edge of the box. He's put a little space between himself and Jorge Villafaña, who was following his run, in anticipation of the pass. He crosses the ball with the first touch while Villafaña is trying to close him down. Villafaña probably recognizes this play; it's how he burned two different defenses just days apart, but this time he's the one who gets burned. 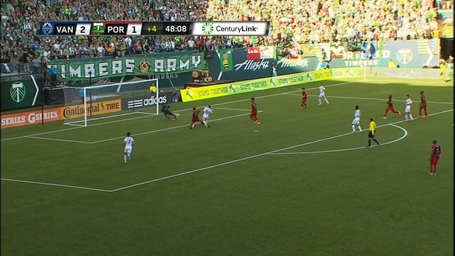 Jack Jewsbury is in the middle marking Erik Hurtado, but he's made the same mistake Villafaña did and he is giving Hurtado a little too much space. He slides in to block Hurtado's shot, but the Whitecaps forward hits it first time before Jewsbury can get in front. 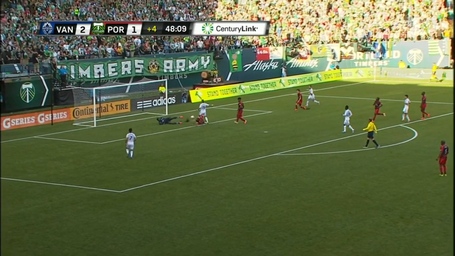 Donovan Ricketts makes the initial save, but the rebound comes right back to Hurtado and he puts the second try in the back of the net. I don't think it's fair to say that Ricketts should have been able to save such a close-range shot, but I do wonder if 2013 Ricketts might have at least parried it away from Hurtado. The Timbers are definitely giving up some goals that they didn't last year, because last season the Goalkeeper of the Year bailed them out on more than one occasion. These season Ricketts looks a little more human and I think it's given me a feel for just how well he covered for our defense sometimes last year.

He shouldn't have to be covering for them so much though, so let's consider where they went wrong. As mentioned, both Jewsbury and Villafaña gave the players they were marking too much room. This close to goal, they should have been on these guys tighter.

I'm also concerned about the lack of involvement from the center backs. Kah steps up to pressure Laba right before he passes the ball, but from that point on he's walking behind the play. Meanwhile Rauwshan McKenzie is in no man's land. I would like to see him reading the play better, anticipating the next move, and then doing something. He could double team Hurtado, try to cut out the cross, or do pretty much anything except just standing there in open space.

The midfield is not doing their team any favors either. In addition to the aforementioned lack of pressure on Laba, nobody anticipated that maybe they should help Villafaña out wide, even though Diego Chara was pressuring Morales just seconds before he received the ball and sent in the cross--why not follow his run? And someone could have stepped up to cover Sebastian Fernandez on the near side of the box, who almost certainly would have been first to the ball if Ricketts had in fact managed to parry it away--I'm looking at you Darlington Nagbe. This isn't exactly a quick play, but everyone who is back "defending" for the Timbers is thinking and moving even slower than the play is.

Caleb Porter is one of those coaches who often talks about defending as a team, but what we have here is essentially a team-wide failure to defend. The fact that we know many of these guys are so much better than this and can provide so much more on defense causes me to object to Porter's claim in his press conference that "this team has never lacked intensity, never lacked spirit." Sometimes they do. Some aspects of our defense are truly not good, but sometimes we just lacks the necessary effort. On this play we see a little bit of both. If only the effort had been there, Vancouver might not have scored and the Timbers could have got into the locker room knowing this game was still well within their reach.