The Timbers couldn't claw their way back after conceding this one.

Share All sharing options for: Stumptown Breakdown: The Long Throw-In

If only the Portland Timbers were as committed to preventing other teams from scoring on long throw-ins as their coach is to keeping his team from using them. Through use of the long throw-in, so loathed by Caleb Porter, Sporting Kansas City got several extra set piece-type opportunities against the Timbers. Many led to dicey moments for the defense. One led to a goal.

Here is the game-winner and loan goal from Friday:

First, let's talk about the referee's call. After watching about a dozen times, I really think the last touch came off Jacob Peterson and this should have been a Timbers throw. However, it's easy to see why it would have been difficult to make the call live, and we shouldn't blame this one on the ref, because the Timbers still had a chance to defend the play that came next. 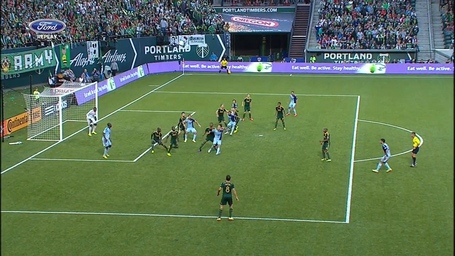 As Seth Sinovic throws the ball in and it become clear that it is headed for the middle of the box, both Diego Chara and Pa Modou Kah push forward, putting Lawrence Olum in an offside position at the near post. Chara rushes forward to help Fanendo Adi mark Aurelien Collin (which is completely hilarious, given the size difference), but the ball sails over all them. 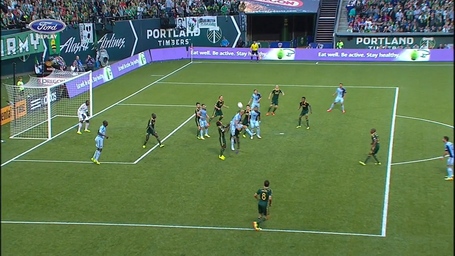 Jorge Villafaña doesn't seem like he's ready to fight for the ball, as if he was expecting either Collin or Adi to win the initial header. He's behind Kevin Ellis and not in a good position to get a touch on the ball as it bounces right in front of them. 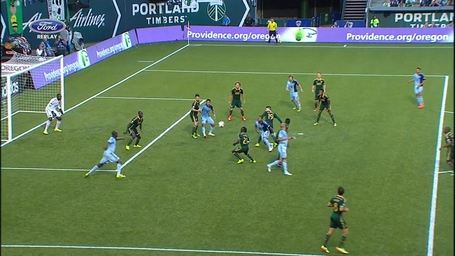 As Ellis pokes it back in the direction of the goal, Kah has dropped back a little, but not to a position where he is actually marking Olum. Olum takes a step forward and appears to be back onside and still unmarked when Ellis touches the ball (though it looks like it was really close). 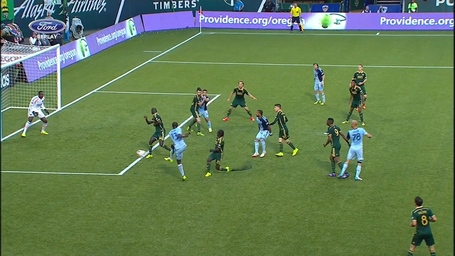 Chara and Kah rush in to try to close Olum down, but of course they aren't fast enough and he gets the shot off. Kah has actually significantly cut down Olum's angle on goal, so the ball passes close by Donovan Ricketts, but he can't get down fast enough to save it.

Kah has frequently been at least partly guilty when the Timbers have given up goals on set pieces, and we see him here again just not quite staying switched on. After initially bringing the defensive line forward and catching Olum off, Kah dropped back far enough to make it easy for the Kansas City midfielder to get back onside. That is fine if he's actually alert to Olum's position and is marking him, but he isn't, so he ends up, as he does far too often, in no man's land while there is an open man in the box.

Other things go wrong on this play too. Chara doesn't really have a shot at winning the initial ball, and would have better served the team by sticking with Olum or by working with Kah to hold him offside. Villafaña is in a difficult spot as he doesn't want to concede the penalty, but he could have tried to get in a better position relative to Ellis and the ball as the throw-in comes in.

There is little new to say about this, because it feels like the same old story for the Portland Timbers. Though Portland's attack couldn't break down Kansas City's tough defense, it's still one of the more dangerous attacking groups in the league right now. But the team will never be more than mediocre if they keep defending this way.

Basically, Liam Ridgewell is probably the Timbers' best hope for salvaging this season. No pressure though, Liam.