Stumptown Breakdown: Same Old Set Piece Defending, But Then a Glimmer of Hope

After some unfortunate set piece defending early on, the Timbers defense tightened up and played well enough to prevent a larger lead for Colorado.

Share All sharing options for: Stumptown Breakdown: Same Old Set Piece Defending, But Then a Glimmer of Hope

Though the Portland Timbers scraped out a win against the Colorado Rapids with a pair of late goals last week, they got off to a rough start that had this looking like another all too disappointing match where the most the Timbers could hope for would be a draw.

The Timbers found themselves trailing early after some shambolic set piece defending, but from that point on, some adjustments on the back line kept Colorado's lead to just one and gave the attack a chance to get the Timbers back in the game.

Here is the goal that put Portland behind: 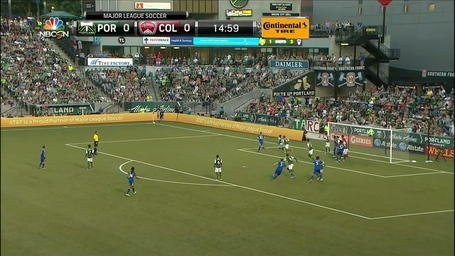 Here is where everything stands as Dillon Powers takes the corner kick. It's not so bad. Players in the box are marked, the Rapids player making a run from the near post to the edge of the box is followed by Diego Chara just in case they play the corner kick short, and Liam Ridgewell is hovering in space ready to attack the ball as it comes in. 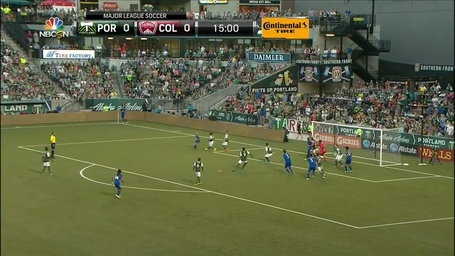 Powers takes the kick and Fanendo Adi, just a yard or so away from the penalty spot in the frame above, charges toward the ball (and away from Drew Moor, his mark) to try to win it first. This is, first of all, unnecessary because he runs right into the space where Ridgewell is waiting for the ball. It is also the wrong choice, since he doesn't win the ball and he allows Moor to cut towards goal unmarked. 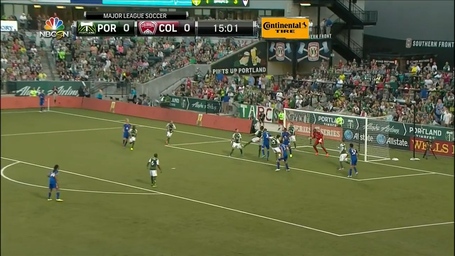 Adi jumps backwards towards Moor, still trying to win the ball, but instead of being able to defend from a good defensive position, he's now trying to recover from a bad position. He misses the ball, and it falls right to Moor, who puts it on frame easily. 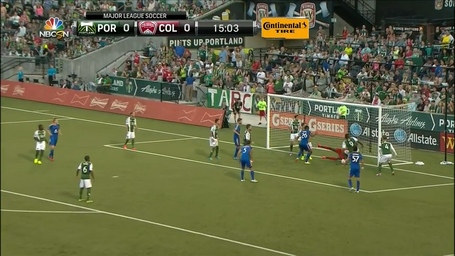 Donovan Ricketts makes the initial block and blocks the follow-up shot as well (shown above), but Adi, possibly trying to make up for his defensive mistake at the start of the play, tries to clear the ball off the goal line and it appears as though he actually gets in Ricketts' way which may prevent him from making a clean save on this shot. 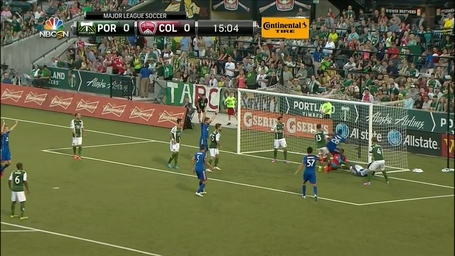 Deshorn Brown manages to push the third effort over the line. The scramble continues for a few more seconds after an attempted goal-line clearance by Diego Valeri, but this is where the linesman judges the ball to have crossed into the goal.

Rather than dwelling on the defending on this play, which looks so much like so many other set piece goals, let's look at a couple of pictures from the very next corner kick the Timbers faced.

Right before this in-swinging corner kick was taken, all the players for both teams were clustered right in front of the goal. Only Ridgewell was a little apart from the group and not assigned to mark anyone. 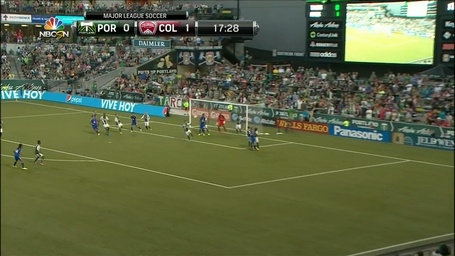 Ridgewell is still free as the kick comes in, right at the top of the six-yard box and in roughly the middle of the goal. He meets the ball and heads it away.

We can only guess at exactly what players say to one another on the field, but we certainly know Ridgewell was talking up a storm on the field Friday night and we could perhaps guess that this is what he told his teammates was going to happen; they would stick with their men while he tried to win the first ball. 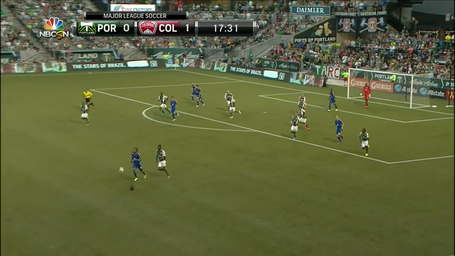 When his header comes back down, it's well outside of the box--it sure is fun when it bounces around in the box, but this is probably better--and though Steve Zakuani doesn't win the ball, he's there to fight for it, so the Rapids cannot just send the ball back into the box for another chance.

Ladies and gentlemen, behold: actual set piece defending. I don't mean to suggest that the defense was perfect the rest of the match, on set pieces or anywhere else, but they did not let the game get away from them. Much of the Timbers' hope of salvaging of the season hinges on Ridgewell's ability to not only play well himself, but to make the back line around him play better too. In his very first appearance with Portland, he managed to do that quite well, keeping the shred of hope alive for a bit longer.