A spectacular assist helps the Timbers equalize after giving up the first goal.

Operation Come From Behind was in effect yet again on Sunday when the Portland Timbers conceded the first goal to the Montreal Impact in spite of dominating play right from the opening whistle. Portland had hardly let Montreal see any of the ball, but the defense was undone by a quick break and a good ball in from the wing.

Needless to say, it was not an ideal start, but the Timbers, who have had way too much experience with OCFB, know that it doesn't work if you just give up. Here they are drawing level about 20 minutes later:

Before the highlight clip starts, the Timbers take a throw-in on the near side of pitch at about midfield. Jack Jewsbury throws the ball to the back line, who pass it around for bit. Darlington Nagbe drops deep to receive the ball from Diego Chara and plays it out wide. 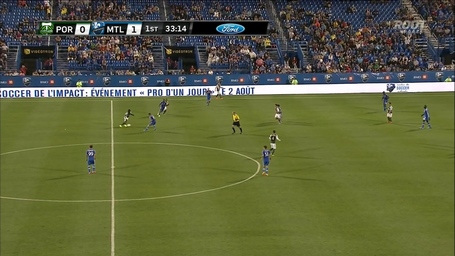 The ball then comes back to Chara, who this time takes a few quick steps and a clever touch and blows past Andres Romero. Meanwhile Nagbe, just out to Chara's left, begins his run up the field. 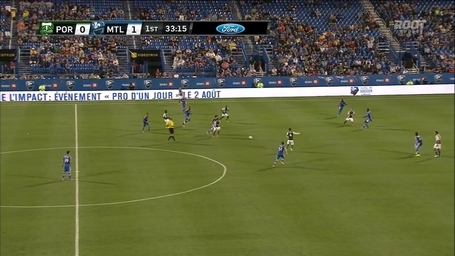 Chara passes forward to Will Johnson in space. The ball rolls just by Diego Valeri on its way, but Valeri wisely lets it keep on going. 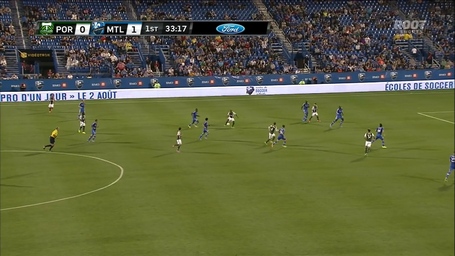 Johnson plays the ball square to Nagbe, who settles the bouncing pass and begins his trademark, zigzagging, drive-the-defenders-nuts run forward. 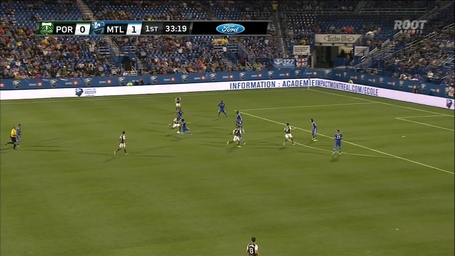 Right here, Nagbe fakes a shot and absolutely has Felipe Martins fooled, causing the Montreal midfielder to commit and slide in. He connects with nothing but turf and thin air as Nagbe pulls back, keeps dribbling, and leaves Martins in a heap on the turf behind him.

Fortunately, Maximiliano Urruti does a better job of reading Nagbe. He cuts into the space right in front of his teammate. No one picks up his run, so he's hanging out in no man's land right inside the box. 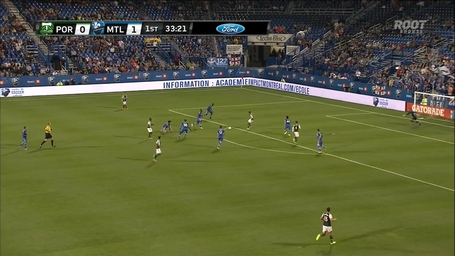 That turns out to be a huge mistake by Montreal's back line. With Martins out of the way, Nagbe splits two more defenders with a pass to Urruti. 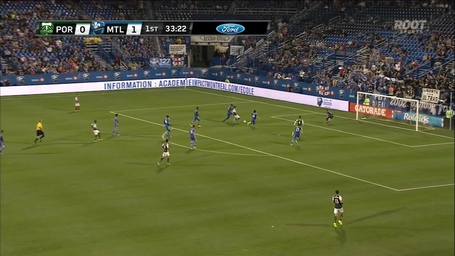 Urruti receives the ball with his back to goal, but with plenty of space--thanks to his sneaky run--to calmly turn and poke the ball home as Hassoun Camara and Heath Pearce close in on either side. 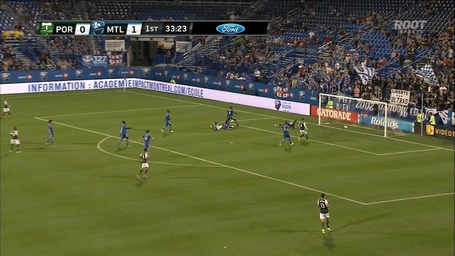 He beats Evan Bush at the near post and actually sends his shot bouncing off the post, but it comes off the right side and ends up in the net, saving us all from hearing the new, updated stat about all the times the Timbers have been denied by the woodwork this season.

I am not the first person to point this out, but Nagbe put on an exceptional show all night and his assist here was that performance at its best. Urruti deserves plenty of credit as well for not being fooled by Nagbe's tricky move and for responding faster than any of his opponents were able to.  He made a smart run and finished well. Overall, the Timbers attack continues to look like a force to be reckoned with.

Now if we could just get the defense to catch up...