The Timbers let a win slip away from them in a particularly heartbreaking manner.

Share All sharing options for: Stumptown Breakdown: Own Goal Strikes

We all knew something like that was coming right? After the initial excitement when the Portland Timbers took the lead over the LA Galaxy in the 70th minute, many of us probably looked at the clock, looked at LA throwing numbers forward against a shaky back line, and knew Portland wouldn't be holding on to all the points.

The soccer gods had evidently decided that a mere equalizer wasn't enough of a gut punch, so they sent it to us in perhaps the most agonizing possible fashion: The Own Goal.

Before the goal, the Timbers had already spent quite a bit of time pinned back in their own half defending, even though both of Caleb Porter's subs by this point brought fresh legs into the attack. 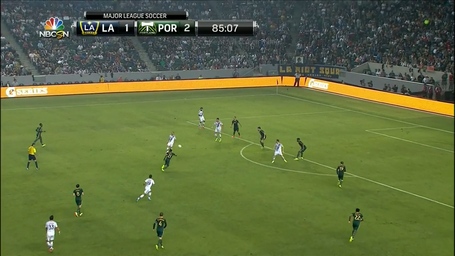 Dan Gargan bypasses the whole Timbers midfield with a long pass forward to Landon Donovan outside the Timbers' box. 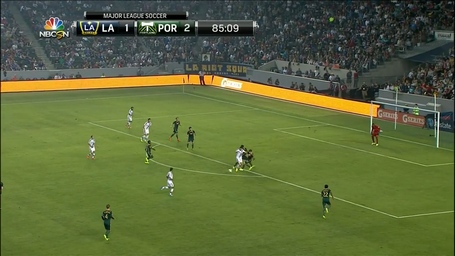 Donovan makes a quick pass to Robbie Keane at the edge of the box, but Jorge Villafaña and Rauwshan McKenzie are quick to close him down before he can so much as think about turning to shoot. He drops the ball back to Juninho. 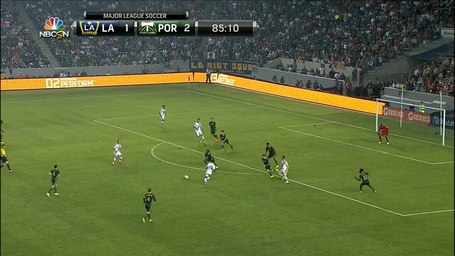 From there, it's an easy square pass back to Donovan.

While Rodney Wallace rushes back in to the box to provide additional help and Diego Chara scrambles to cover both Juninho and Donovan, the rest of the Timbers' midfield is still jogging back behind the play. While the Timbers naturally want to keep a couple players forward to have at least a possibility of a counterattack, it should be as obvious to the players as it is to the audience that the defense has been struggling to hold LA off. A little extra effort from Will Johnson or Diego Valeri might have helped Chara. 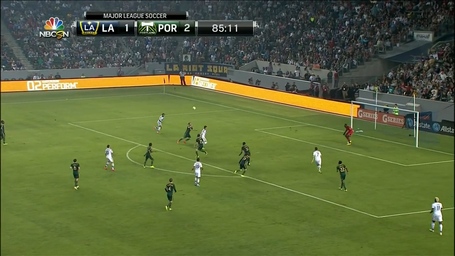 The Timbers had been able to limit Donovan's influence for much of the game, but here he provides a moment of brilliance for the Galaxy, with a chip over the back line to Baggio Husidic. In one of the lapses of concentration that has characterized the Timbers' defending of late, Michael Harrington has left Husidic tons of space on that far side of the box.

Husidic, Keane, and Rob Friend are now behind everyone except Harrington, leaving the rest of the back line desperately and hopelessly trying to get back in position. 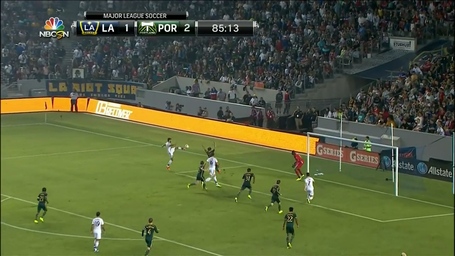 Harrington can't stop Husidic's pass back across the face of goal. It's kind of an awkward ball; it's slow and not at a good height for Friend to get anything on it, so it ends up bouncing in front of Donovan Ricketts and McKenzie. 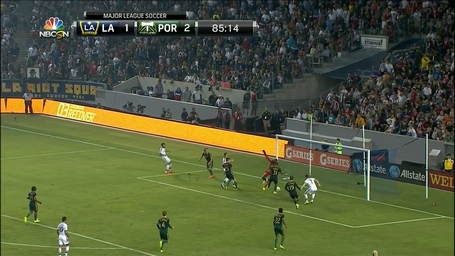 Ricketts doesn't read the ball well so he's unable to come out to catch it. It bounces right in front of McKenzie who can't just let it roll through because Keane is lurking near the far post. He makes an awkward attempt to clear it, but instead he knocks it into the goal.

It's a really difficult position for McKenzie. If he had recovered his position earlier, he might have been able to get his back to goal and clear the ball away, but as it is, it's just too easy to kick it into his own net and it's pretty hard to do much of anything else with it.

What McKenzie needs is something big from his keeper, and with so little pace on the ball, one would like to see Ricketts react to it in time. But he is definitely thrown off by the pass and is pretty committed to his near post where he looks to be expecting a shot from Husidic.

Winding the tape back even further, the chip in from Donovan might have been prevented if Harrington hadn't left him such a wide open target, or if the midfield had actually recovered on defense. I think of defensive duties as a huge part of Johnson's role in particular, so to see him so far behind the play--instead of in the mix and disrupting things while Keane, Donovan, and Juninho are knocking the ball around--is disappointing. It's true that the Timbers have a numbers advantage without him, but with the defense consistently struggling this year and the team in desperate need of some wins, the Timbers just can't afford to have the majority of the midfield decide that they're going to going to take a pass on defending.

The unfortunate result of all these mistakes is another game where the Timbers got things done on the attacking side and had three points in their grasp, but couldn't do enough on defense to hold on to those points.