Rodney Wallace may have been back in action for the Timbers since June, but it felt like he really came back on Saturday with a goal against Chivas.

At least two goals and clean sheet. After the match with Chivas USA, the Portland Timbers told the press that's what they had been shooting for. It took 90 minutes of solid defensive effort to get the latter, but the former they achieved shortly before halftime.

Here are the Timbers, giving themselves a nice, two-goal cushion:

Prior to the beginning of the clip above, Danny O'Rourke starts things off with a nice pass forward to Diego Valeri who is in the middle of the Goats' attacking half. His first touch gets away from him for a second, but he recovers quickly to play the ball out wide to Gaston Fernandez. 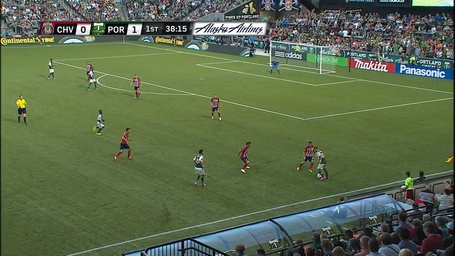 Valeri follows his own pass all the way to the sideline to be an outlet pass for Fernandez. 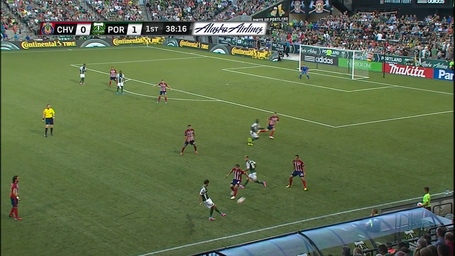 There's some great off-the-ball movement here from the Timbers, as Fernandez drops it back and then runs toward the middle, while Diego Chara runs into the space on the sideline in front of Valeri. Either one of them is a decent option for Valeri, who chooses to chip the ball forward to Chara. 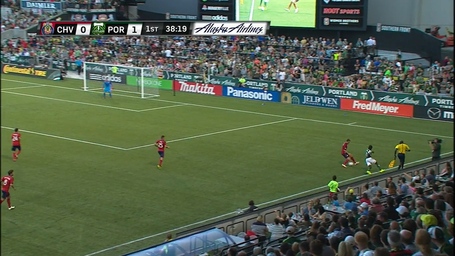 Chara gets on the end of Valeri's pass, keeps the ball in play, and nutmegs his defender. Chara doesn't quite get back to the ball first, but he's close enough to prevent Tony Lochhead from being able to clear the ball well. 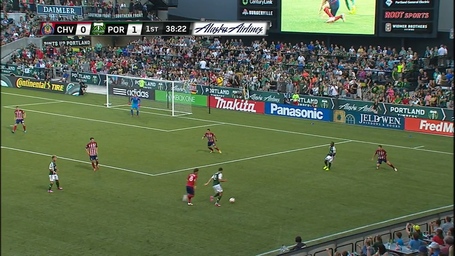 All Lochhead can do do is kick the ball back up the sideline, where Valeri is waiting. He dribbles a few steps and passes into the box where both Fanendo Adi and Rodney Wallace are trying to run onto his cross. 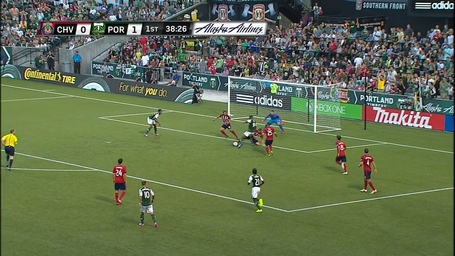 Adi can't quite finish in stride, but he muscles his defender off and wins the ball with his back to goal. He tries to turn and shoot, but can't. Even as Eriq Zavaleta kicks out to try to stop him, he does manage to tap the ball to Wallace, who could build a house on all the open territory he has staked out in the Chivas USA box. 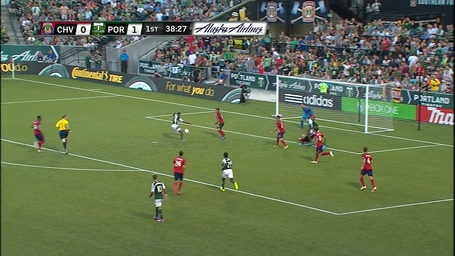 Wallace hits his shot on the volley. He doesn't make great contact, but it takes a couple of nasty bounces that help it past  Dan Kennedy. It could be that Wallace also gets a little help here from Akira Kaji, who might be blocking Kennedy's view as he finally steps up to try to prevent the shot.

This was another pretty great team goal by the Timbers. Chara's trickery to get past his defender turned out great even if it didn't pan out how he pictured, and Adi kept the play alive with strong hold-up play in spite of Zavaleta's manhandling. He also gets credit for recognizing that his teammate was in a better position and for option to pass instead of shoot.

One of the best things about this play is that it has Diego Valeri all over it. Starting from when O'Rourke plays the ball out of the back to him, Valeri is involved three separate times. That hernia surgery and resulting slow start to the season are but distant memories now. Valeri is definitely back.

As is the goalscorer. While Wallace returned to the field for the Timbers back in June, a goal in this game and a major role in setting up the game-winner in the previous victory make it feel like he's finally back for real. Wallace had seven goals and six assists in 2013; he was someone the Timbers could rely on to finish opportunities or set them up for his teammates. If he is rounding back into form, it could be crucial to the Timbers' success in the season's homestretch.