The first recorded game took place in 1876 but it was mostly fits and starts until the first city league debuted in 1907.

With 2015 marking the club's fortieth year and twenty-fifth season (and fifth MLS season), there are many celebrations coming next year, while 2013 marked the 120th anniversary of soccer in Goose Hollow. Yet on Tuesday night the Timbers will make history as the first Portland team to play in continental competition with a CONCACAF Champions League group stage game at Alpha United in Georgetown, Guyana. To mark this important occasion in the history of the club and soccer in the city, we're looking back to the game's earliest days in Portland. Over two parts, we examine some of the important figures, teams and leagues that established soccer in the Rose City before 1920.

That the game of association football grew slowly in Portland, Oregon should be no surprise. Portland was only chartered as a city in 1851 and by 1890 could claim just over 46,000 residents. That soccer lagged behind the explosive growth of collegiate football was simply following the national trend. Yet in its earliest years, association football became a staple in Portland's British expatriate community through the efforts of stalwarts like George Cameron and Phillip Chappell Brown.

Portland teams traveled to neighboring cities to contest the imported British game, all the while establishing a successful presence in the Rose City. However, disappointments like the failure of the 1905 Lewis and Clark Exposition tournament and the inability of its small group of soccer disciples to spread the game beyond the narrow confines of the local British citizenry ultimately bound the game to a focused but limited audience. Separated by hundreds of miles from other soccer communities, the favored game of the local British expats was insular.

Despite the difficulty in developing soccer into a sport on par with baseball or collegiate football in the area, the earliest proponents and players of soccer were vital in the long term. The persistence of the British in the first three decades (1890-1920) of the sport's development gave rise to half a century of ethnic clubs beyond the traditional Anglo-centric teams in Portland, which in turn set the stage for the introduction of the Portland Timbers in 1975.

In the mid-to-late 19th century, the occasional football match was played by the association rules in Portland, usually confined to gatherings of British social organizations, such as the Hibernian Benevolent Society's June 1, 1876, picnic at East Portland Park. Nine years later, in 1885, football was reported played among 36 English longshoremen on the banks of the Willamette River.

On Thanksgiving Day 1890, a Portland XI faced a club called the Wanderers on Hawthorne Avenue in East Portland. Results were not reported, but The Oregonian provided, for the first time, the names of the players who took the field that day. That the Portland team used 11 players and the Wanderers just 10 was not a subject of comment.

The Sons of St. George, a fraternal organization, held a gala day at City View Park on May 21, 1892. Two five-aside football matches were held, featuring teams named the Thistles, Clydesdale and the Neptune Rovers. George Cameron played for the Thistles, and his team won both games 1-0 to earn the winner's medal. 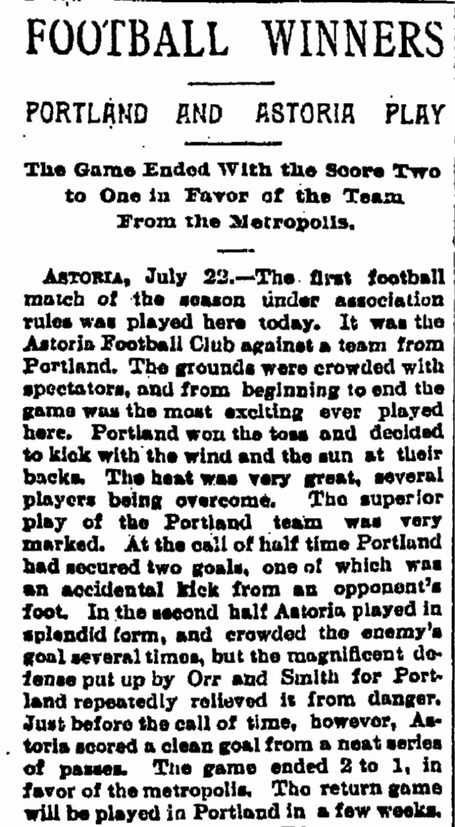 On July 22, 1893, Portland's nascent association football team traveled one hundred miles northwest to play the Astoria Football Club. The Portland team, clad in black and dark blue, emerged victorious, 2-1, with the winning margin coming thanks to an Astoria own-goal. Neither of the goal scorers was named in newspaper reports though The Daily Astorian mentioned Cameron as the Portland club's secretary.

Earlier in the year, the Multnomah Amateur Athletic Club (MAAC), a two-year-old sports club, leased the grounds to the south of the Portland Exposition Building to be used as an athletics field. By 1893, the five acres abutting the Expo Building had a five-lap track, baseball diamond, three lawn tennis courts and a grandstand featuring two sets of bleachers. Today, this is the exact location of Providence Park. The first intercity football match in Portland's history took place on October 21, 1893. Playing at home, as it were, for the first time, the Portland team routed the visiting Astorians 5-0 in the return match. Player names were recorded for each side, with George Cameron again featuring for his adopted hometown of Portland.

Born in Kilmarnock, Scotland, in 1862, George James Cameron attended Kilmarnock Academy and Glasgow University before making his way to the United States. Given the founding of Kilmarnock FC in 1869 and Rangers FC in 1873, it is possible that he could have watched Killie play as a youngster and Rangers while at university, before migrating to North America in 1879. Cameron moved to Michigan, married and made his way to Portland in 1890. Two years later he played football with the Sons of Saint George and just a month after passing the bar exam in 1893, traveled to Astoria as part of the Portland XI. 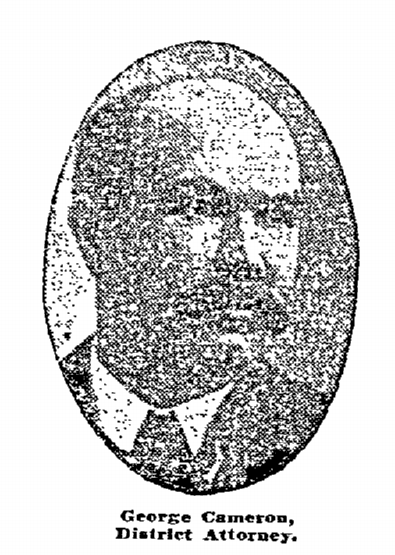 By 1896, an Oregon and Washington association football league was instituted on the strength of the Ilwaco, Washington team. Other clubs in the league were to come from Astoria, Portland and Oregon City, as well as the Washington cities of South Bend and Chinook. The league hoped to send its top side to California to determine a West Coast champion. Instead, five years passed in Portland as association football faded from a sport of civic interest to an afterthought, ranking far behind the emerging collegiate football game. Mostly isolated from the growth of association football in other parts of the region and country, Portland lost valuable time. While barely 20 men were available to play the association game in the Rose City in the early 1890s, state associations were stocked with teams in New Jersey, Maine and Rhode Island, and city leagues were present in New York, Chicago, St. Louis, Milwaukee and Philadelphia. Closer to Portland, a league was created mostly among coastal cities in Oregon and Washington. In August 1897, the entire league schedule was printed in The Oregonian with teams based in Royal Flats (now Royal City), Ilwaco, South Bend, Ft. Canby, Chinook, Nahcotta and Astoria.

The 1890s also saw the volcanic growth of the collegiate gridiron game in the state of Oregon, as the University of Oregon, the State Agricultural College (now Oregon State University) and the MAAC developed powerful teams. While several dozen might attend a soccer match, 4000 turned out to watch the MAAC defeat the YMCA in 1898. Yet it was the intrastate games between the universities that dominated the sporting landscape, even before the turn of the century.

"These football contests between university of Oregon and Oregon agricultural college are annual events. A great deal of rivalry exists between the two institutions. It began in 1894, when they first met on the gridiron. Since then each has had its ups and downs of fortune," The Oregonian reported in 1899.

In November 1901, none other than George Cameron refereed Portland's first soccer game for five years, as British sailors defeated the local Seaman's Institute, 2-1. With the local lads trailing by a goal late on, Cameron inserted himself into the Institute's line-up, designating inside left Stewart as referee for the remainder of the game. According to the match report, Cameron dribbled almost to the sailors' goal before his shot was cleared off the line just as time was called.

Cameron organized a meeting at his office in December 1901 to formally create a Portland Football Club (PFC) in which he was elected president. By then Cameron was the Municipal Judge in Portland, having already served a term in the City Council in an accelerating political career.

Association football was regularly described in the local press as the ''Scotch and English game." Occasionally large crowds in cities like Glasgow and London were a subject of note in Portland newspapers as the sport was very specifically linked to the British Isles, despite the growing presence of clubs in large, eastern American cities. Portland competed in its first interstate match on February 22, 1902, when PFC traveled via the steamer Hassalo to Ilwaco, Washington, to face the powerful team from the mouth of the Columbia. Though Portland fans made the 115-mile trek to support the team, there was not enough quality in the metropolitan side to defeat Ilwaco. The 2-0 score line made the proximity to Cape Disappointment all the more appropriate and the PFC crew made the long trip back to Portland.

Three years passed before meaningful soccer returned to the city, despite a sprinkling of matches against sailors in port. Cameron reorganized the core players in a new Portland Association Football Club (PAFC) and began preparations for a grand tournament that fall. The year 1905 marked the centennial of the Lewis and Clark Expedition reaching the Pacific Ocean, and the country celebrated with the Lewis and Clark Exposition in Portland from June through October of that year. Among the varied activities surrounding the exhibition was an association football tournament, hosted by the PAFC. Teams were invited from British Columbia, Washington, Oregon and San Francisco.

On September 9, 1905, the PAFC played a practice game in preparation for the upcoming tournament. Fewer than three weeks before the tournament kicked off, Portland still expected most, if not all of the invited clubs to attend. Yet, once again, the carefully laid plans of footballers in the city were thwarted.

"In spit of rumors to the contrary, the Portland Association Football Club will proceed with its football tournament today, tomorrow and Saturday at the Multnomah Athletic Club grounds, the only opponents of the Portland Club being the strong Ladysmith Association Football Club from British Columbia. Play each day will start at 3:30 P.M. and the contest for the gold medal will be determined by the best two games out of three. That is to say, Portland and Ladysmith will play each of the three afternoons, commencing today."

Those words in the September 28 Oregonian spelled doom for the tournament in Portland, though the two teams did indeed play a best-of-three series. Ladysmith crushed Portland 6-1, 4-0 and 4-0 to easily win the abbreviated tournament. 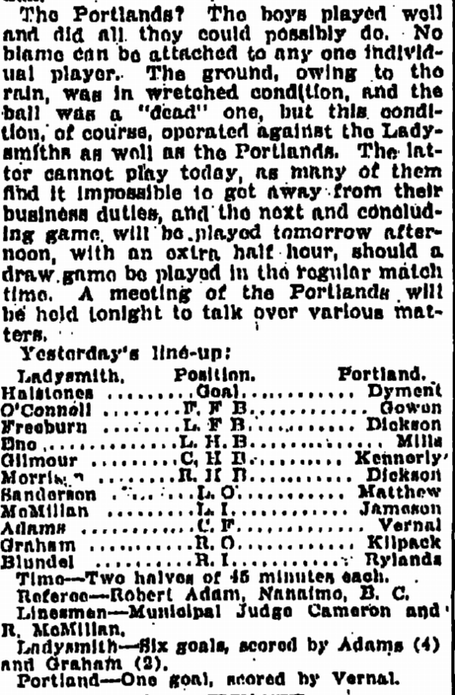 The PAFC won five of six games with British sailors in 1906 before the first proper year of soccer in Portland finally arrived in 1907. Beginning in February, a team of Scottish expatriates faced a squad of English counterparts for the first game of the 1907 season. Four times the international games were held at the Portland Cricket Club grounds, with the Scottish expats emerging as inaugural city champions.

All images via Historial Oregonian

(this article was originally published in the now defunct XI Quarterly)