Stumptown Breakdown: They Had It Coming

Share All sharing options for: Stumptown Breakdown: They Had It Coming

One could say that an LA Galaxy equalizer seemed imminent from the moment the Portland Timbers opened the scoring, although that would be generous. The Galaxy looked dangerous from the opening whistle and the Timbers were lucky to get on the board with a free kick, their lone shot in the first 45.

Maybe the Timbers would have been able to regroup at halftime and come out with a better performance in the second half to hold that lead, but then they they gave this goal up in first half stoppage time:

From the build-up play to the final pass to the finish, this goal serves as a great illustration of most everything that the Timbers did poorly and that gave them trouble throughout the match with the LA Galaxy. 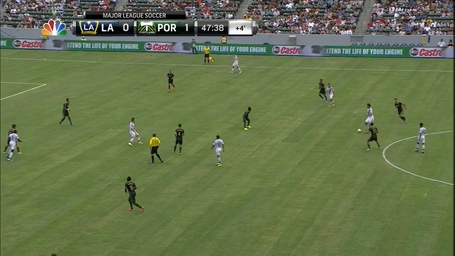 Omar Gonzalez receives a pass around midfield and easily dodges Diego Valeri as he carries the ball forward. In the frame above, we see the first problem; a Galaxy player, in this case Gonzalez, with tons of space in the midfield and days to make a decision about where he wants to pass the ball.

Will Johnson and Diego Chara are sitting deeper than normal, not stepping up to challenge the players in the midfield,  which may be a reflection of a lack of confidence in the back line's ability to withstand the onslaught from LA. Concern about the defense is understandable, but the total lack of pressure in the midfield doesn't do them any favors. Instead it allows the Galaxy to possess the ball for long stretches in the Timbers' half, while also hindering Portland's ability to break quickly when they recover the ball. 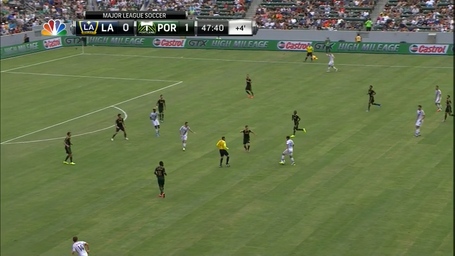 With all that time and space, Gonzalez chooses to play the ball forward to Landon Donovan, who also has too much space, though Johnson steps up to rectify that quickly. 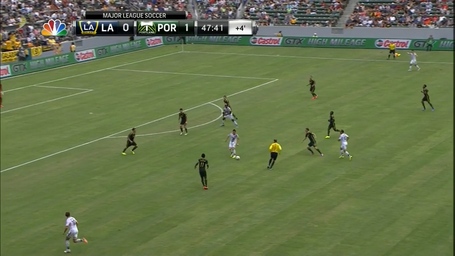 Robbie Keane slips in behind Johnson to receive the pass from Donovan and once again, he's got plenty of space. Robbie Rogers makes an overlapping run up the near side, while Keane dribbles forward until he's stopped by Jack Jewsbury at the edge of the box. 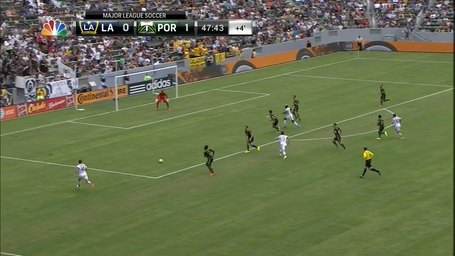 Untroubled by anything resembling defense from Kalif Alhassan, Rogers is wide open to receive a pass from Robbie Keane. 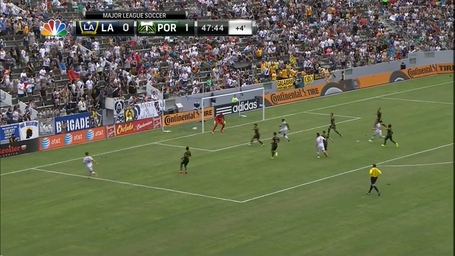 Far too late to actually help, Alhassan steps on the gas and tries to catch up to Rogers, but the left back has--you guessed it--tons of time and tons of space to whip a cross into the box.

For some reason, as the cross comes in Danny O'Rourke steps away from Gyasi Zardes, whose run into the box he had been following closely. O'Rourke makes a halfhearted attempt to be first to the cross, which was perhaps halfhearted because he judges the attempt to be futile anyway. He would have had a better chance if he had kept following Zardes' run. The cross sails over his head. 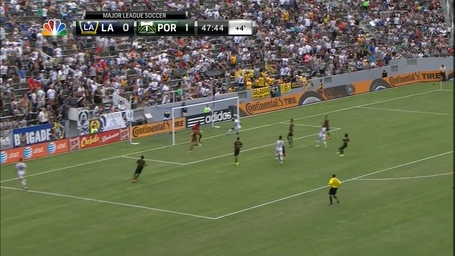 And Zardes, ready and waiting, puts the open header past Donovan Ricketts.

This goal wasn't a fluke by any means. With minimal pressure in the midfield and virtually no defensive effort for Alhassan, Rogers was waltzing up the left side and sending crosses in all through the first half. Meanwhile the Galaxy forwards where shaking off Timbers defenders with ease. Before the goal, an open header by Keane went just high, while on another chance Zardes simply out-muscled his defender and saw his header pop off the crossbar. They finally got one in the net here, then scored their second goal on a very similar play.

It has to be said that the biggest factor at play here was probably simply the meeting of a leaky defense with an attack that's currently firing on all cylinders. The Timbers made it far too easy for them though. There's no good excuse for the lack of pressure in the midfield, the minimul defensive effort from Alhassan, or the frequency with which the Timbers made the same stupid mistakes--allowing Rogers room on the wings to send in crosses, missing the runs of the Galaxy forwards--without correcting a thing.