Share All sharing options for: Stumptown Breakdown: Really, You Call That Defending?

As you all may remember, about a week and a half ago, the Portland Timbers defense kept a clean sheet while playing on the road against a team that, prior to the game, was just above them in the standings. It was a very impressive performance overall. One might expect that a line-up  with only one change from the previous week and featuring precisely the same back four would be able to play similarly well at home, against a team several points below them in the standings.

In honor of the miserable defensive showing on Sunday, this week in Stumptown Breakdown we will look at all three San Jose Earthquakes goals.

In spite of the Timbers' lively start, the Earthquakes were the ones to get the scoring started:

Shea Salinas gave the Timbers fits throughout the game and the trouble started as soon as San Jose got their first attacking chances. Here, he plays a quick pass to Tommy Thompson and beats Alvas Powell to get the return pass. 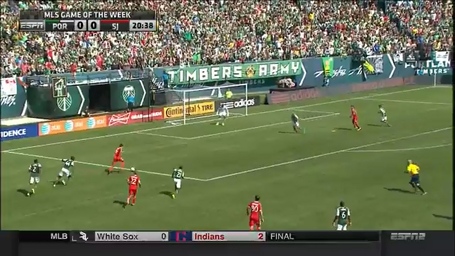 He then skips past Pa Modou Kah, who has come way out of position to support Powell. Salinas has nothing but wide open spaces in front of him as he dribbles into the box, while Kah and Powell follow (slowly) behind  watching to see what will happen next instead of trying to recover. 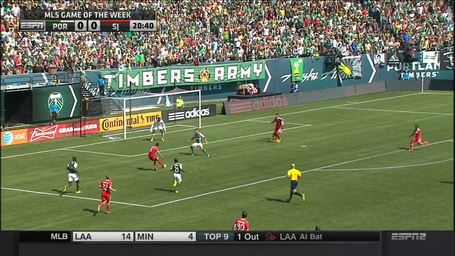 Although Liam Ridgewell sort of slides over to head off Salinas, he doesn't commit, allowing the San Jose winger to get all the way into a great shooting position without truly feeling any pressure. He is still wide open as he takes a shot. 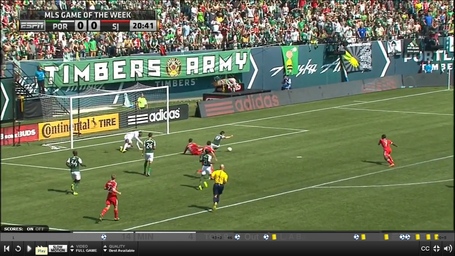 Donovan Ricketts saves the first attempt. In perhaps the lone moment of really good defending on this play, Jorge Villafaña is stuck to Chris Wondolowski like glue, so even though the rebound bounces right to the Earthquakes' frontman, he can't get a shot off. The ball rolls to Cordell Cato, but Villafaña slides in to block his shot as well. 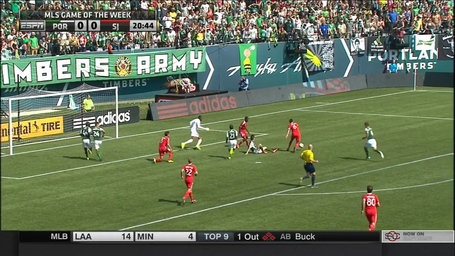 Unfortunately he can't get back to his feet in time to block Salinas' second shot, and at this point we have to wonder why Villafaña is apparently the only guy in green doing any defending. Will Johnson and Diego Chara are both in the box, but neither of them helps Villafaña out as he tries to single-handedly block every shot taken by every Earthquakes attacker.

Meanwhile Kah and Ridgewell both run to get in goal to cover for Ricketts, who has come off his line. The keeper probably should have stayed at home on this one, since he cannot get to the ball without going through two or three players. He is caught in no man's land as Salinas once again takes a shot untroubled by any pesky defenders 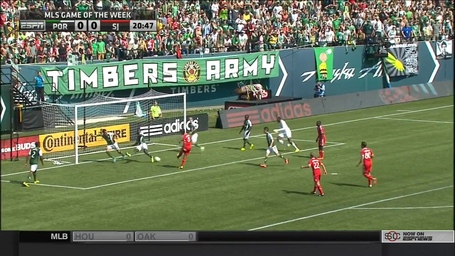 The ball bounces off the far post and right to Wondolowski. Apparently it didn't occur to anyone to mark him and with Ricketts off his line, there is no one in goal who is allowed to stop the shot with his hands. Neither Kah or Ridgewell manage to keep it out with their feet. 1-0 Earthquakes.

Heading into halftime down a goal to the Earthquakes was bad enough, but things got worse right after halftime.

The Earthquakes win a 50-50 ball in midfield and move quickly up the field. Cato carries the the ball up the sideline, cuts toward the box, then plays the ball to Wondolowski at the top of the box. 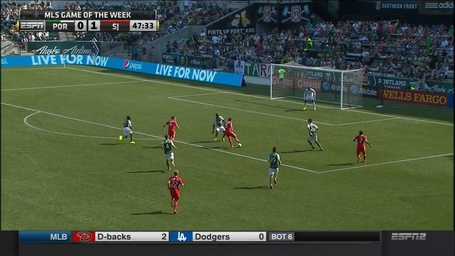 Wondolowski has entirely too much space, but he does not make much of it. He is either trying to shoot for the far post or to pass to Salinas, Kah blocks the ball. 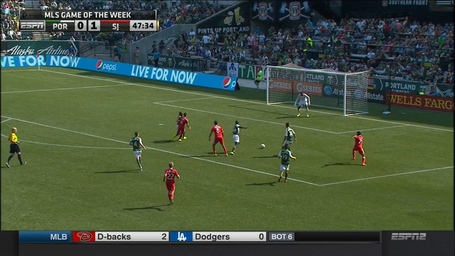 Kah and Ridgewell are the two closest players to the loose ball, but they both hesitate, each apparently expecting the other to clear it out. Cato is more than happy to step up where neither of the Timbers center backs will, and he slams the ball home past Donovan Ricketts.

We're taking about the Portland Timbers, so even though it looks pretty bad, they pull level by the 74th minute. They later score a third goal that could have been the game-winner, but as I said, we're talking about the Timbers, which means that before they can score that third goal, this has to happen:

This goal probably only needs one picture to break down the entirety of the problem. Here it is: 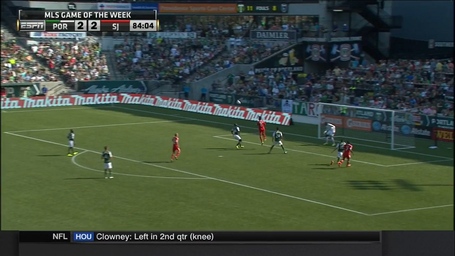 Wondolowski jumps for the header while Kah and Ridgewell stand flat-footed, watching. The defending on all three goals was pretty appalling, but this one might be the most baffling. Both center backs seem aware that the forward is right between them, but neither of them does anything.

In a conversation on last week's Soccer Made in Portland that seems very timely in retrospect, Caleb Porter addressed the Timbers' poor defensive performances at home. He attributed the many goals the Timbers have given up at Providence Park in part to a tendency to be too aggressive on the attack early in the game, leading to a concession as soon as they take their foot off the gas for even a second.

That's exactly what appears to have happened on the first goal, but it doesn't quite explain the collapse on the second and third goals, where there seems to be a total breakdown in communication between the center backs, as well as a lack of initiative. Why is it that every failure to communicate results in nobody doing the job? Just once, couldn't they both step up to do the job? It may be redundant, but it probably wouldn't result in Chris Wondolowski getting an open header to put San Jose on top again.

Fortunately the Timbers are on the road this week, so Porter can probably play the same back four and they'll do just fine, but they'll be back home for their second CONCACAF Champions League match next week and the team needs to figure out a better way to manage home games before then.