There may have been a missed offside call on Deshorn Brown, but the defending on the Rapids' second goal could have been so much better.

Share All sharing options for: Stumptown Breakdown: Not Good Enough

As the Portland Timbers finished the first half with a 1-0 lead over a Colorado Rapids team that was seemingly in free fall, it looked like they might actually win one of their must-win games. In quite an impressive stroke of bad luck, an unarguably incorrect penalty call early in the second half gave the Rapids an easy road back into the game.

Having already wiped away the deficit, the Rapids turned it into a lead in the 66th minute:

Dillon Powers receives a pass on the near side of the pitch and does a pretty good Darlington Nagbe impression, dribbling past Timbers players until he reaches where he is in the frame below. 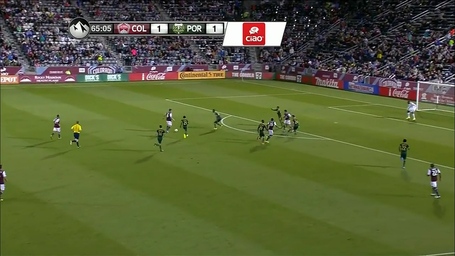 Here, he finally comes under a little pressure from Pa Modou Kah and has Diego Chara nipping at his heels. There is nothing but space on the far side of the field though, because everyone is clustered in front of goal, including Alvas Powell, who is pulled out of his position on that side, following Carlos Alvarez as he streaks into the box. 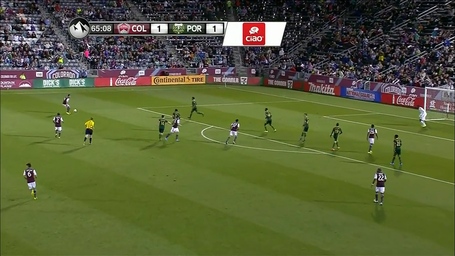 Marc Burch runs forward into all that space and receives a pass from Powers. Alvarez has jogged back out of the box, and with the man he was marking no longer in such a critical area, Powell runs back out to defend Burch. 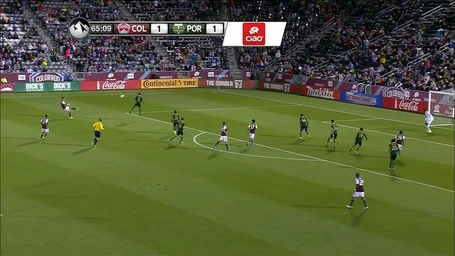 He does not quite get there in time, although it appears he also was not far away from being able to block the cross with his head. Not a bad recovery attempt, but the Timbers really needed someone out wide so that Burch didn't have all that time and space to serve this ball in.

It is a little hard for me to decide who messed up here. Maybe Powell should have trusted his center backs to pick up Alvarez's run rather than allowing himself to be pulled so far out of position. But really, would you trust the Timbers center backs with that responsibility? Frankly, it is refreshing to see one of our defenders step up to the task, rather than assuming one of his teammates will do it.

Unfortunately no one was aware enough to step up and fill the void Powell left. With Chara chasing down Powers, I think that task should have fallen either to Ben Zemanski or to Nagbe, who was the midfielder on that far side.

Of course, the other big question on this play perhaps has less to do with the defending and more to do with the officiating. Is Deshorn Brown offside when Burch kicks the ball? 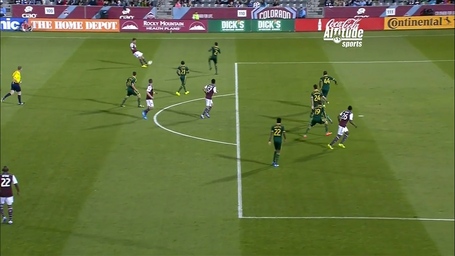 You can see why the linesman finds it hard to call. With the benefit of a replay, it looks like Brown is level Kah's arm, which cannot hold him onside because he can't play the ball with his arm. However, Kah could make that decision easier on the officials by doing a better job sticking to the line held by Liam Ridgewell and Jorge Villafaña. Then Brown would be very obviously offside.

Alternatively, since Kah is closest to the ball and has his back to all his teammates, maybe Ridgewell and Villafaña should be letting Kah set the line, in which case one of them should commit to marking Brown. As it happened, there seems to have been a breakdown in communication that leads to Ridgewell and Villafaña trying to catch Brown offside, while Kah keeps him on (at least in the opinion of the assistant referee). 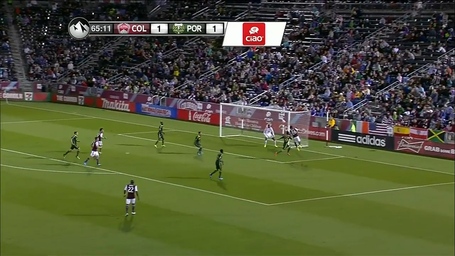 At least Villafaña doesn't just stop, expecting the offside call. He tries to catch up to Brown, but Colorado's speedy forward has a head start and he's already rising to meet the cross by the time Villafaña catches up. 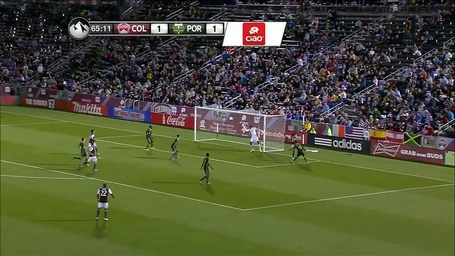 As Donovan Ricketts scoots over to the near post, Brown heads the ball back across the goal to the far post. The Timbers keeper cannot shift his weight back fast enough to do a darn thing about the header.

Everyone in the Timbers camp has a good reason to be frustrated with that terrible penalty call to start the second half, but the team gets to decide how they respond to things like that. While the next two highlight reel chances went to the Timbers, the defense started to fall apart and the next goal, obviously, went to the Rapids. The defense continued to give the Rapids (mostly Brown) some excellent chances to put the game away.

The Timbers did pull a goal back for the draw--a small comfort when they were the first team to take a lead--which made this game another one that fits well into the pattern we've seen since about April, when the Timbers finally remembered how to score multiple goals in a single game; the offense is good enough, but the defense, far too often, is not.