MLS is about to turn 20 and today their logo got a makeover.

At a New York Fashion Week press conference this morning, Major League Soccer unveiled a new logo for the league as it goes into its 20th season. The new MLS crest, pictured above, will be rolled out over the course of the 2014-15 offseason and will be in use league wide by the start of next year.

The new crest has a more modern look than the old "foot kicking ball" logo that has served the league well since 1996.

Of the sparse handful of elements in use by the new setup, however, one should stand out to fans of the Portland Timbers: the three stars on the left hand side of the crest. According to league commissioner Don Garber, the stars stand for "a commitment to club, commitment to country, and a commitment to community", the very same motto that the Timbers Army has championed for years. 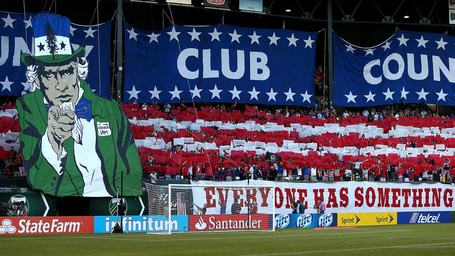 MLS Chief Marketing Officer Howard Handler even acknowledged that they drew inspiration from the joint TA/American Outlaws tifo at last year's Gold Cup match between the United States and Belize: the famous Cascadia Sam surrounded by the words "Club", "Country", and "Community".

MLS's press conference can be watched in its entirety here.