The Timbers' win over Vancouver on Saturday looked anything but assured until Diego Valeri's 28' strike.

The Portland Timbers' match against the Vancouver Whitecaps started off like many others have this year: a hard, high press from the Timbers, some quick counter attacks from their opponents, and the Timbers going the better part of the first half without scoring, leaving opportunities for their opponents to take the front foot. However, this time things did not quite follow the 2014 script.

Here is the prettiest video of the goal:

We will want to go back a little further and a little wider than just what is seen there.

The play starts with a ball won by Diego Chara in the midfield, followed shortly by a foul on Will Johnson in the center circle by Russell Teibert. As he gets up, Johnson is already looking down the pitch and picks out Jorge Villafana pushed far down the left flank, occupying the space between Mauro Rosales and Steven Beitashour, both of whom are tucked inside.

With room in which to work, Villafana has plenty of time to pick his head up, take several touches town the line, and swing an early cross into the box.

Meanwhile, Fanendo Adi, who has already been giving Kendall Waston and Andy O'Brien, the Whitecaps centerbacks, plenty of trouble at this point, starts drifting toward the near post as soon as Villafana gets the ball. Both centerbacks shadow the big man leaving him double-teamed and effectively out of the play.

Meanwhile, Tiebert is still recovering from his previous adventures in fouling Johnson further up the pitch and Laba is just watching the ball and jogging into space near, well, nobody. Jordan Harvey, the Whitecaps left fullback, sees Valeri's run and makes an effort to pick him up, but he is too far out on the wing and cannot get there in time.

All this culminates in Valeri left alone in the center of the Vancouver box, with a beautifully delivered cross dropping onto his trailing left foot. Valeri, being very good at soccer, hits the ball out of the air on the volley and crushes it past David Ousted to open the scoring for the Timbers. 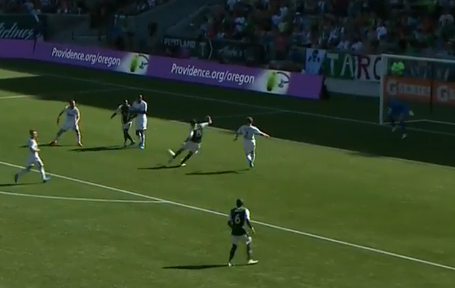 So what went right here?

Granted, the Vancouver midfield did the Timbers a number of favors, from giving Johnson just enough room to get off the quick free kick to failing to track Valeri, but if the Timbers can continue pulling off this sort of quick break, they will be able to convert more often than not.