Stumptown Breakdown: Above the Line

Alvas Powell scores his first MLS goal and gets the Timbers attack started on their way to a great second-half performance.

Share All sharing options for: Stumptown Breakdown: Above the Line

After several missed opportunities, last Saturday the Portland Timbers finally seized a chance to jump above the red line. The match between the Timbers and the Vancouver Whitecaps remained scoreless following a relatively uneventful first half, but it only took about five minutes of the second half to change that.

With a little help from a new face in the line-up, the Timbers open the scoring:

Before the play, the Timbers earn back-to-back corner kicks, the second of which the Whitecaps clear, but only as far as Darlington Nagbe. He drops the ball back to Pa Modou Kah at midfield. 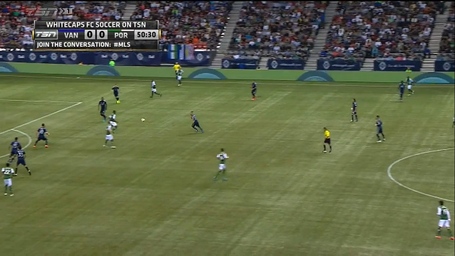 Ahead of Kah are Rodney Wallace, Will Johnson, Fanendo Adi, Alvas Powell, and Diego Valeri all in a line just in front of the Whitecaps defense, yet none of them of them are under any pressure. From this wealth of options, Kah picks out Adi and plays the ball all the way up to him. 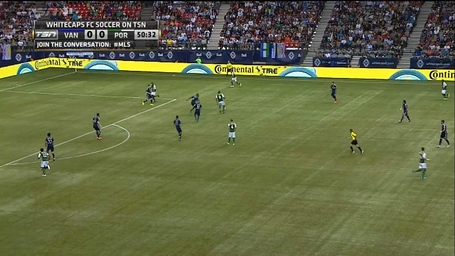 Adi passes to Valeri on the wing, while Powell starts his run into the box. Jordan Harvey is with him as he starts running, but just a second later he instead steps up to close down Valeri. Someone definitely should have been putting on little pressure on the playmaker, but it probably shouldn't have been the guy marking someone in the box. 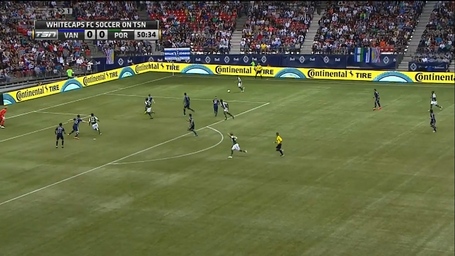 In what seems to be a total breakdown in communication, no one covers for Harvey, which leaves Powell free in the box. Kendall Waston, the closest defender to Powell, seems to not even notice the young Jamaican's presence in front of goal.

Meanwhile, in the middle of the box, Steven Beitashour lets Wallace run right past him. He does appear to motion to Andy O'Brien to pick Wallace up, but O'Brien reacts slowly and never really has Wallace under control as he makes a strong run in front of him, also to the near post. 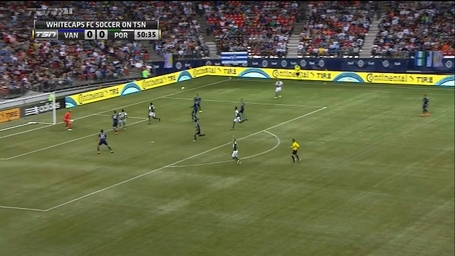 The Timbers have two players making near-post runs and no one headed to the far post, which is not always ideal, but now that Wallace has come all the way across the box and is goal-side of O'Brien, he's effectively setting a shield for Powell. O'Brien is the only Vancouver defender who might have been able to recover and defend Powell, but he can't do it now that Wallace is in the way. 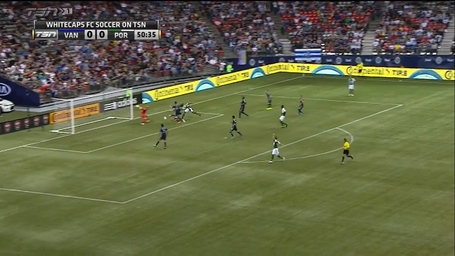 Powell's header at the near post is just perfect. He redirects the ball on frame and heads it down so the bounce takes it over the outstretched arm of David Ousted. The Timbers take the lead.

This was a lot of terrible defensive play from the Caps, starting with the weak clearance on the corner kick and continuing through the whole build-up as they give the Timbers too much space every step of the way. They let Adi pick out Valeri too easily, gave Valeri too much space to pick out a teammate and whip in a pinpoint accurate cross, and left him two open targets in the box. If Powell somehow didn't manage to get to that cross, Wallace probably would have been the one to poke it in. The Whitecaps almost made it hard for the Timbers not to score on this play and the Timbers make the most of it.

We've been here before this season, in this place where it seems like the offense is clicking and the defense is solidifying. There have still been some pretty big bumps in the road though, so I won't really believe the Timbers have pulled off a comeback unless and until they clinch a playoff spot, but they sure were fun to watch on Saturday.