The Set-up Against Seattle

Caleb Porter has approached the Seattle away games differently than most matches this year. In the only regular season home game against the Sounders, he is likely to present a third version of his system.

Share All sharing options for: The Set-up Against Seattle

Before any Portland Timbers-Seattle Sounders game, there are so many possible talking points, it's difficult to narrow it down to one specific topic. With so much on the line for playoff positioning, Cascadia Cup standings, injuries and national team call-ups, one could start almost anywhere. Perhaps a natural starting point is looking at how the Timbers lined up against Seattle and how that compares the 'usual' set up.

Back in March, in the Timbers' third game of the season, Porter had not yet settled on his now familiar starting XI. With Jack Jewsbury making his first appearance after recovering from a pre-season injury, Porter set Ben Zemanski at right back and pushed Diego Valeri further up field than we're now accustomed to seeing him. Darlington Nagbe started on the left while Jewsbury sat deep, beneath Will Johnson and Diego Chara. Here's a quick look at a static version of Porter's formation, remembering of course that this is more of a generality than specific identifier of exact positions: 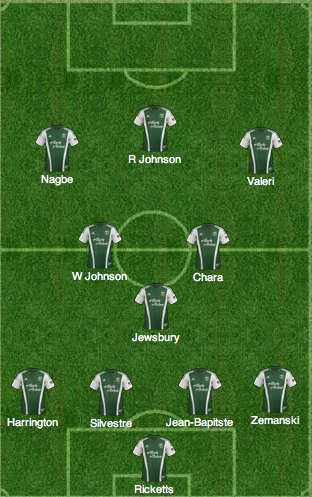 When the two teams played again in August, Porter was faced with two significant absences, with Will Johnson and Chara both out, while giving young Alvas Powell a look at right back. Again, Jewsbury sat deep, though Porter employed something closer to a 4-1-4-1 with both Kalif Alhassan and Valeri playing centrally and Nagbe and Wallace staying wider on the sidelines. Ryan Johnson was the starting striker again, but with a slightly different role given the set-up behind him. Here's that formation with the usual caveats: 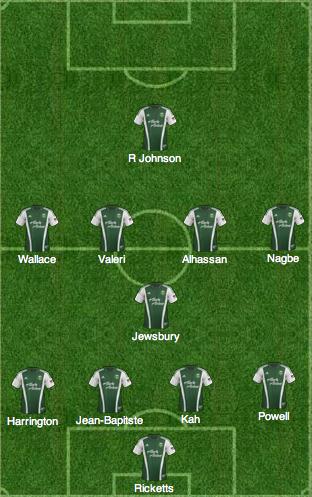 So the question this weekend is how exactly will Porter line up his available XI? We know it will have to be different based on Wallace, Powell and Ryan Johnson being out due to international duty. Additionally, there are injury concerns with both Valeri and Nagbe, though it does seem like the latter is better off than the former.

Maximilano Urruti is most likely to start up top in his first derby match, but how will Porter align his midfielders? Will he employ a deep-set defensive midfielder to try to slow the Sounders' skilled central attacking players? Or does Jewsbury's necessity at right back, given Powell's absence, mean it will be Chara and Will Johnson's responsibility? Is Valeri healthy enough to start? If so, is it as simple as starting Alhassan in Wallace's place, or are there other changes Porter has in mind to specifically address Seattle's recent defensive woes? If not, could we see Jose Valencia's return to the starting XI?

Lots of questions that will very likely go unanswered before the line-ups are unveiled an hour before Sunday's kickoff. But we do know that Porter loves the challenge of luring opposing managers into thinking he will set up one way and then adding wrinkles, as he is wont to call them, to create an advantage. As the Sounders are flailing, Porter could be looking to go for the kill and start an aggressive, attack-minded line-up that aims to jump early on Seattle. But because we have not yet seen Porter against the Sounders at Jeld-Wen Field, we shouldn't assume we know what he's going to do. After all, he utilized more-defensive-than-normal set-ups in both games at CenturyLink Field but did not necessarily do the same when playing other away games.

So what do you think? Anything or anyone missing here that Porter could use to get the best of Seattle?