Portland beat Astoria 5-0 that day, marking not the first soccer game in the city but the first at Multnomah Field.

Share All sharing options for: Soccer in Goose Hollow Turns 120

October 21, 1893 is the official starting point for soccer in Goose Hollow with a game between the Portland and Astoria teams taking place at Multnomah Field. The game, one of a series of contests between the Oregon clubs, was the first official game to take place on the Multnomah Amateur Athletic Club's new field, though certainly not the first game in Portland. Still, this anniversary is another good reminder of the longevity of the sport not only in the Northwest but specifically between SW 20th and 18th Avenues.

Back then, however, there was no stadium. In fact, 20th and 18th Avenues were Stout and Chapman Streets. Tanner Creek ran not far below the surface to the north of Salmon Street with a small usable area between the shanties of Chinese vegetable gardeners and the Northern Pacific Industrial Exposition Building. The MAAC, newly formed, was headquartered downtown and did not yet have its own clubhouse.

Here's a west-facing map of the area in 1889. Note the wooden bridges used to span the natural gully carved out by the creek. (Map credit: Sweet Cakes, Long Journey: The Chinatowns of Portland, Oregon) 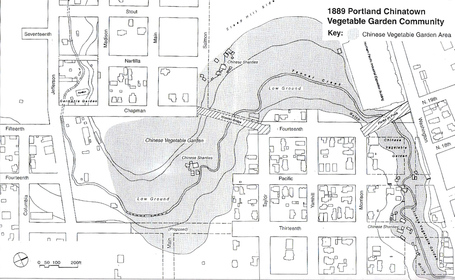 And here's a photo from the same year, showing just how sparse the area was. (Photo credit: William Henry Jackson (1843-1942)) 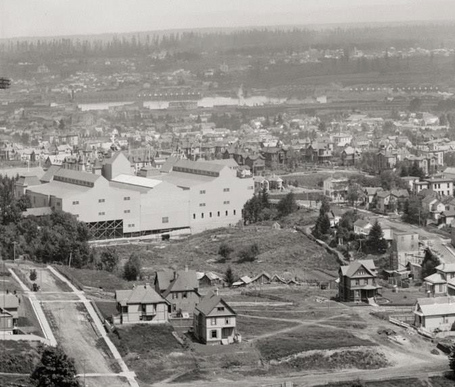 Soccer had been played in Portland for nearly twenty years by the time the Portland team hosted their Astorian rivals in 1893. The Oregonian had reports of small-sided games as early as 1876 and a Thanksgiving Day 1890 game on Hawthorne Avenue. Subsequent matches were played at the Bishop Scott Academy in NW Portland and the Irvington Park grounds on the east side. After the construction of the baseball stadium in NW Portland, league games often took place at Vaughn Street Park after the turn of the century.

Yet Multnomah Field became the location of choice for important matches, especially against teams from out of town. The 1905 Lewis & Clark Exposition promised a tournament of games between teams from California, Washington and British Columbia, though in the end, only the Ladysmith club from Vancouver Island bothered to show. Still, those games were played at Multnomah Field.

The 1893 game against Astoria came less than five months after the MAAC secured a lease on the field behind the Exposition Building. The initial cost to lease the now hallowed grounds? $3000. (Text credit: The Oregonian, May 29, 1893) 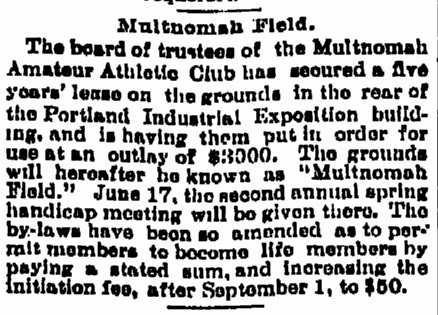 Eleven years after the first soccer game on site, Tanner Creek exploded out of its brick piping beneath the surface and flooded the Goose Hollow neighborhood, including the field. Though it was taken a decade later, this photo gives a good view of the original 1893 grandstand which remained in place until a 1910 fire destroyed the Exposition Building and the MAAC's grandstand and 1901 clubhouse. The view is from Chapman Street (18th Ave) toward where the current west side stand and press box are located. (Photo credit: Oregon Historical Society) 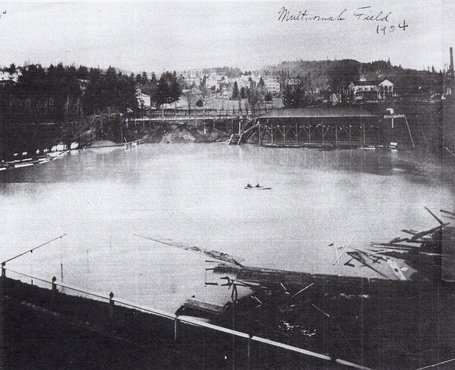 After the MAAC added property all the way to Salmon Street to the south in 1909 and the devastating fire of 1910, the pace of improvement and expansion quickened. The original grandstand lasted seventeen years from construction to conflagration. The replacement grandstand made it only sixteen before it was replaced with the stadium we know today. As with many things in Portland during the first few decades of the 20th century, the notion of progress removed most of the vestiges of 19th century life. Thus, while our stadium is now quite old itself (87 years this month), it covers the legacy of those early games beneath concrete and FieldTurf.

Soccer continued to be played at Multnomah Stadium after its construction in 1926, as the Timbers organization noted with this 1927 aerial photo. Yet the return of soccer on a regular basis to Goose Hollow took until the mid-1970s and the birth of the original Portland Timbers.

Today, the Timbers and their fans sit, stand and play on the same part of the city as did the victorious Portland team did 120 years ago. As a 5-0 score against Astoria opened play on the field, perhaps it is fitting that the closest home game to this historic date gave the Portland team five consecutive clean sheets in the friendly confines of Goose Hollow.